Thankfully, this super-lightweight rematch is happening in March. It is needed, too, following the controversial nature of their first encounter last February; a bout Taylor won by decision, yet many felt should have gone the way of Catterall.

With them both unbeaten and riding high, this potential fight between Fury and Joyce has trumped Fury vs. Anthony Joshua as the all-British heavyweight fight to make in 2023. Stylistically, it would surely make for a fascinating spectacle.

This is still a huge fight, despite the efforts of everyone involved to prevent it happening. There are no bigger boxers than Fury and Joshua in the UK and, just as they would have done last year, they would sell out any football stadium in the country within minutes.

Though their first fight ended emphatically, there is still every reason to see a repeat of the featherweight battle between Wood and Conlan, not least because fight one was the 2022 “Fight of the Year”. Wood triumphed that night in March, when putting Conlan through the ropes in round 12, and it would be a privilege to watch them reunite in 2023.

Talked about for a while now, a light-heavyweight fight between Smith and Buatsi seems to make more sense with each passing year. Both, in recent times, have slipped from the public’s radar and could probably do with a fight like this to kickstart some momentum. 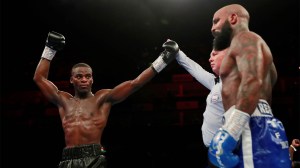 This pair of cruiserweights met for the first time in 2019, with Riakporhe winning a split decision after 10 rounds. Since then, however, they have both gone from strength to strength, showing vast improvements and emerging at the top of the cruiserweight tree.

While perhaps not the hottest fight at heavyweight right now, a rematch of the 2015 fight between Joshua and Whyte does make a lot of sense. Both in need of a jumpstart, it would seem sensible for the Londoners to reconvene.

Set for January 21 in Manchester, this meeting of middleweights gets 2023 off to a fine start. It might not be as big as Eubank Jnr vs Conor Benn, but it’s a better fight.

With both coming off exciting stoppage wins, it would be great to see Dubois and Wardley get together this year for what would likely be a short but explosive heavyweight encounter.

Sheeraz is the hot new thing at middleweight, while Bentley, the British champion, recently gave a good account of himself against Kazak Janibek Alimkhanuly. This one therefore ticks a lot of boxes.