“A lot of them do not want to dress me because I’m too big.”

Celebrities are always expected to look their best, especially when it comes to red carpet fashion. And when they’re attending premieres or galas, designers usually jump at the chance to outfit a star. But it turns out that some celebs have been excluded from the world of designer fashion, with some brands straight up refusing to dress certain entertainers.

Oftentimes, it has to do with body size or other outward appearances — which definitely doesn’t sit well with most people. That’s why quite a few celebrities have now spoken out to reveal what’s really going on behind the scenes and uncover how the fashion industry is still lacking in inclusivity.

Find out what these celebs had to say…

When Megan Mullally hosted the SAG Awards in 2019, she shared that she couldn’t find anyone to dress her — despite the fact that she was going to be on camera all night. She says that she eventually resigned to finding a dress online, just like she had done many times before.

“Looks like i will be buying my dress online though, as per my usual, even though there is literally a 100 percent chance that i will be on camera, because I’M HOSTING IT. designers do not send me dresses. i’m online scrolling through the gowns sections of various websites- which i know how to do pretty well at this point- and then i tried to order something from saks fifth avenue and they cancelled my order 😂 oh, the glamor of it all,” Megan wrote on Instagram.

Octavia Spencer may have won numerous awards as an actress but she says when it comes time to walk the red carpet, designers don’t approach her, often making it difficult for her to find something to wear.

“I’m just a short chubby girl. It’s hard for me to find a dress to wear to something like this!” she said ahead of the Golden Globes in 2012. “It’s a lot of pressure, I’ll tell ya. No designers are coming to me! Maybe I should have sworn off peanut butter last year instead of this year. One of the best things about awards shows are you get to wear clothes you would never get to wear.”

When Bebe Rexha was nominated for a Grammy in 2019, she had a hard time finding a dress to wear to the event. After her team reached out to numerous designers, she was repeatedly turned down and finally decided she had to go public about the situation. She took to Instagram to share what was going on, demanding that designers choose to “empower women” instead of making them “feel less than by their size.”

Beyoncé may have taken home the Fashion Icon Award at the 2016 CFDA Awards but she says for many years, she struggled to get designers to agree to dress her. During her speech, she shared that during her days in Destiny’s Child, most high-end labels “didn’t really want to dress four Black, country, curvy girls.” Since they couldn’t afford to buy their own designer dresses and couture, Beyoncé’s mom took it upon herself to create clothing for the group.

“My mother was rejected from every showroom in New York. But like my grandmother, she used her talent and her creativity to give her children their dreams. My mother and my uncle, God rest his soul, made all of our first costumes, individually sewing hundreds of crystals and pearls, putting so much passion and love into every small detail,” she said on stage.

9 Musicians Who Had to Change Their Offensive Song Lyrics

Danielle Brooks says that at the start of her career, she wanted to stand out with her style but big name brands turned her down when she asked to work together. Although she’s become quite accomplished in the entertainment industry, she says she still has brands refuse to dress her for red carpet events.

“When I first started, I wanted to fit in. I wanted to be so inclusive with my style and it was really hard. I haven’t been given an opportunity to wear these big-name designers, it has never been an option whether I had a stylist or didn’t. A lot of people won’t design for me, no matter how many SAG awards, Tony nominations, Grammy wins; it doesn’t matter,” Danielle told Vogue.

Ashley Graham couldn’t attend the Met Gala in 2016 because she couldn’t find anyone to dress her. While she says she believes it was because she didn’t have the right designer relationships, she also noted that there hadn’t been enough time to get a custom gown because most designers only have sample size ready for short notice.

“I couldn’t get a designer to dress me. You can’t just show up in jeans and a T-shirt,” Ashley told The Cut.

Early in her career, Cardi B says her stylist was often turned down by designers because they didn’t think she was the right fit for their brand. Cardi says she was rejected “by both high-end designers and Instagram boutiques” who told her she was “not the It girl.”

“I don’t take it personally. It’s just something you’ve got to prove to people, just like music. A lot of music people didn’t want to work with me at first, and you’ve just got to prove yourself. You’ve got to prove that you’re that girl and that you’re worth it. I’m not going to turn down an opportunity because they don’t want to let me in, or they just don’t like me in their clothes, period,” Cardi told Teen Vogue.

Jonah Hill has always had an interest in fashion but he says it’s incredibly difficult to be well dressed when you’re not a sample size. He explained that it took him a long time to realize that he could still have personal style even if most clothes weren’t made for his body.

“It’s really hard when you’re overweight to dress a certain way, because clothes aren’t made for people who are overweight to have style…The idea was realizing, whether I was big or small, that I really can define my own personal style. I think that’s a dope wave that’s happening right now in culture, too. But for me, that was a big turning point of realizing: okay, be yourself. You don’t have to be anything you don’t want to be. And if you’re really interested in fashion then you should be, don’t push that away. Lean into it,” he told GQ. 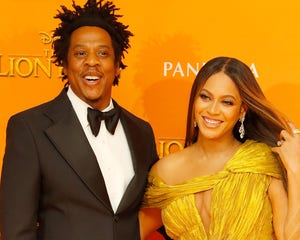 12 Famous Couples Who Said ‘I Do’ More Than Once

Gabourey Sidibe has long been turned down by designers, explaining that she’s been told that she is “too fat” for their clothing. In fact, for her first major red carpet appearance at Cannes, she had to buy a black dress from Torrid since no one offered to dress her.

“Even though we are moving towards more visibility for plus-size people, there is a lot [of] pushback. So it’s important to keep fighting [and] to keep being visible until the conversation changes and [it] is no longer about our bodies because I’m not my body. I’m a whole person,” Gabourey told Teen Vogue.

Back in 2012, Melissa McCarthy reached out to numerous designers to dress for the Academy Awards. Unfortunately, she was repeatedly turned down — but it inspired her to start her own plus size clothing line.

“I couldn’t find anybody to do a dress for me. I asked five or six designers — very high-level ones who make lots of dresses for people — and they all said no,” Melissa told RedBook Mag.

Despite being voted the “Sexiest Woman Alive” by Esquire, Christina Hendricks says she often has a difficult time finding a designer who will dress her on the red carpet. She explained that because she’s not a size 0 or 2, designers are typically unwilling to loan something out.

“People have been saying some nice, wonderful things about me. Yet not one designer in town will loan me a dress. They only lend out a size 0 or 2. So I’m still struggling for someone to give me a darn dress,” she told Daily Record.