The new version of the hardcore Ford Ranger Raptor pick-up has swapped its 2.0-litre turbo diesel engine for a substantially more powerful 3.0-litre petrol V6 and undergone a radical redesign influenced by the US-market F-150 Raptor.

Available to order now from £57,340, it is the first version of the new fourth-generation Ranger to go on sale in Europe, with deliveries getting under way in late summer. The standard Ford truck, revealed in 2021, will follow by the end of this year.

The new 3.0-litre twin-turbo petrol V6 puts out 284bhp – a 74bhp hike – and 362lb ft. Although Ford has yet to reveal performance figures, the new Raptor is expected to comfortably outpace the previous version, which needed 10.1sec to hit 62mph from rest. However, the current 2.0-litre diesel engine will also be made available in the Raptor from 2023.

A ‘race-bred’ anti-lag system, similar to that used by the Ford GT supercar and Ford Focus ST hot hatch, keeps the turbos spinning for three seconds after lift-off, to enable the driver to get back on the power sooner after coming out of a corner, for example. The turbos are also mapped to start spinning at different times in each of the automatic gearbox’s 10 ratios, in order to give the straightest acceleration curve. 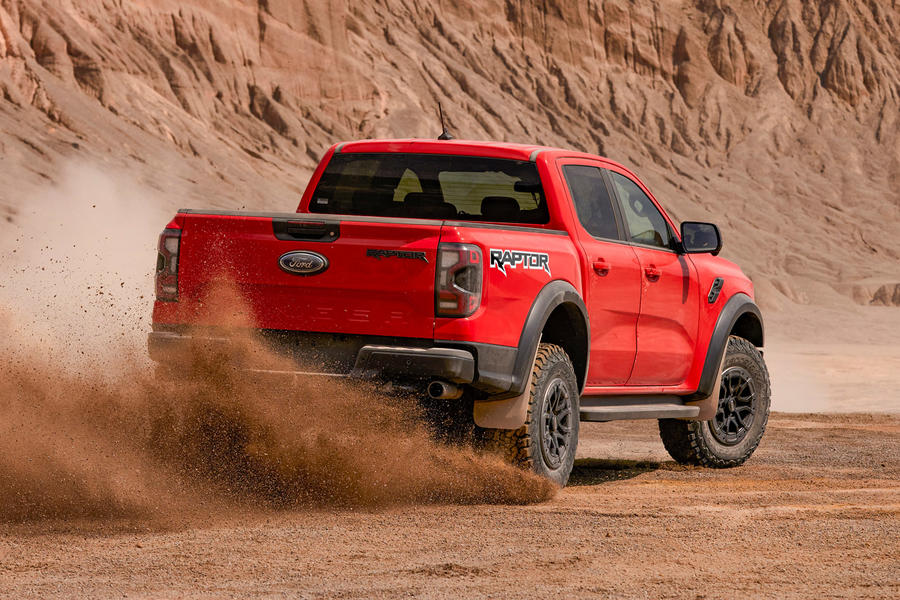 Ford Performance programme manager Justin Capicchiano told Autocar: “It’s a totally engrossing experience. You’ve got a rowdy twin-turbo petrol V6. It makes a great noise – we spent a lot of time in the sound lab – and it comes with the performance to go with it now. It’s got the looks, the bark and the bite. We’re really proud of this one.”

As with the previous Raptor, modifications over the standard Ranger go well beyond the powertrain. The chassis has been comprehensively revised to enhance off-road performance and durability, with new mounts and reinforcements throughout, extended-travel suspension with lower-friction 2.5in live-valve Fox dampers and a 2.3mm-thick steel bash plate that is twice the size of the standard Ranger’s.