The initial short wheelbase model offers seating for up to five. Mercedes-Benz says the second-row rear seat can accommodate up to three child seats next to each other. Among the standard equipment are seven airbags, including a centre airbag that is designed to reduce the risk of head injury to the front seat passengers in the event of a severe side impact.

The nominal boot capacity underneath the cargo blind at the rear is put at 551 litres, extending to 1979 litres when the rear seat is folded down. The maximum payload is 516kg, including an 80kg roof rack load.

Mercedes-Benz has announced three different equipment lines that will allow prospective buyers to build on the standard EQT: Advanced Plus, Premium and Premium Plus.

The EQT is based on Renault’s CMF-B platform. It is underpinned by a suspension consisting of MacPherson struts at the front and a rigid axle with a Panhard rod at the rear. 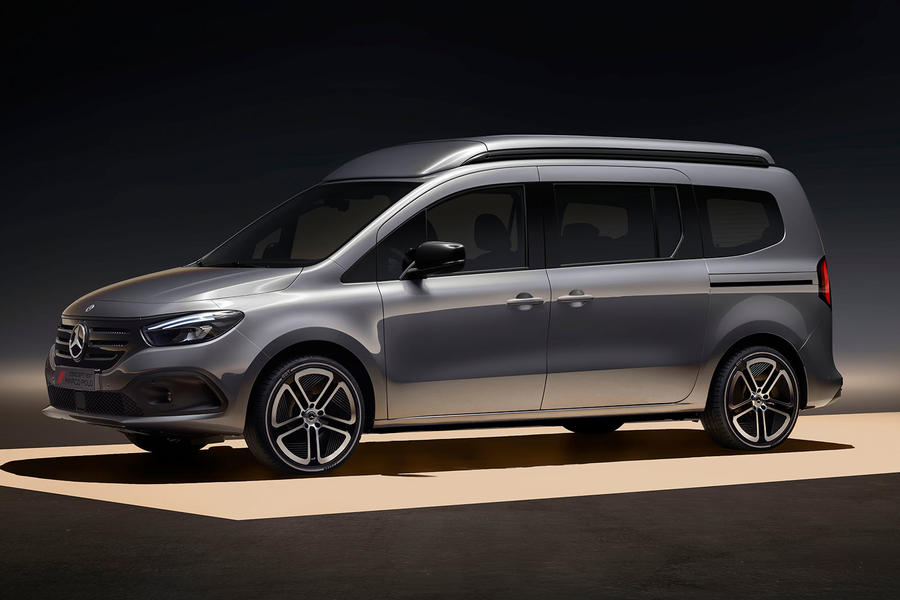 Mercedes-Benz has previewed its plans for a ‘micro-camper’ variant of its latest electric-powered EQ model with the unveiling of the Concept EQT Marco Polo.

Featuring a pop-up roof together with other typical camper features, it is planned to go into production during the second half of 2023, with right-hand drive UK deliveries expected to kick off in 2024.

While the standard EQT receives a 2716mm wheelbase, the Concept EQT Marco Polo sits on an extended version of Renault’s CMF-B platform with a wheelbase Autocar has been told runs to 2898mm.

The added length provides the scope for a number of typical camper features that Mercedes-Benz says are being developed for the production version of the new model.

The pop-up roof houses a bed measuring 1970mm by 870mm, while the rear has also been designed with bench seats on either side in a layout that can accommodate a larger second bed measuring 2000mm by 1150mm.

With the roof extended, Mercedes-Benz claims there sufficient interior height for adults to stand in the rear. A solar panel integrated into the top of the roof provides energy to a battery used to run ancillary functions, while a second battery stored in a drawer can be removed for recharging on 240-volt mains power.