Simultaneous Oral Spelling (SOS) is a multi-sensory teaching method introduced as a teaching approach in the Orton-Gillingham Method of reading instruction for explicit and systematic teaching. SOS helps build phonological awareness by breaking down word sounds for students to practice spelling certain words. SOS can be used alongside your regular spelling program so that students can practice the spelling rules you are teaching within your word list. This blog post will review one approach you can take when implementing SOS into your lesson.

Students that struggle with spelling often have difficulty interpreting phonemes in a word and struggle with connecting each phoneme to a grapheme. A phoneme is the smallest unit of sound. For reference, below are the phonemes of letter sounds in the English language: 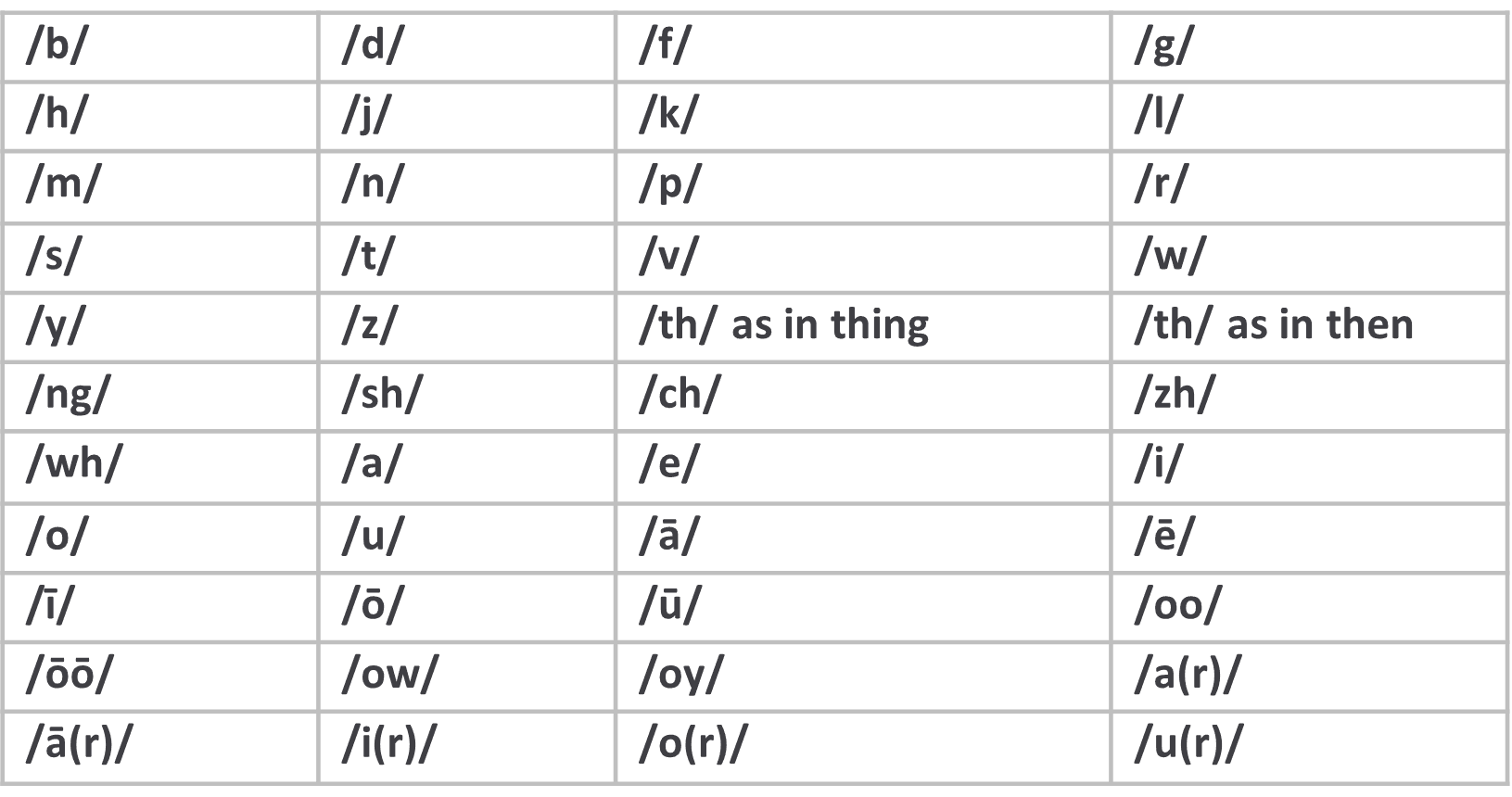 A grapheme is the single letter or group of letters that make up a single phoneme.

For example, the phoneme /sh/ can produce different graphemes: ss as in mission or ti as in station. Each grapheme contains the /sh/ phoneme but is represented by different groups of letters, even though it makes the same sound.

Children with language processing disorders, like dyslexia, are especially susceptible to weaknesses in phonological awareness. A symptom of the disorder may be difficulty spelling since students struggle with understanding phonemes. Using the SOS method can help students interact with phonemes and better view how they make up units of sound.

Later, as students move away from simpler CVC words into more complex words with more challenging phonemes that exist like “goat”, “laugh”, or “ocean”, the SOS Method is valuable.

Teaching words by introducing certain words in a word family lesson, as these words come up in a text a student reads, or as a review for a series of spelling words children are learning in class, the SOS method can help accelerate mastery of spelling.

To begin using the SOS Method, you can plan to spend no more than 10-minutes practicing a series of carefully selected words. Once you have chosen your words, you can allow students access to the words you are teaching depending on your lesson focus or support strategy for your students. As students practice their spelling, they can refer back to the correct spelling of the word. As the students become more proficient in spelling the word, they can practice without being provided access to the word.

Follow these steps to help your students practice spelling, modeled after the SOS method.

Step 1: The teacher says and shows the word.
Dictate the spelling word to your student(s). As you state each word, enunciate each letter sound clearly, and face the student so that he or she can see your lips as you say the word. Depending on whether the student significantly struggles, you can also provide the word to the student by writing it on the board, using plastic letters, or providing the word in a flashcard or on paper for the student to use as a reference when practicing this method.

Adapting the SOS Method for use within an Elkonin Box:

Elkonin boxes are visual tools that help students understand each phoneme within a word. While the SOS Method is often implemented using just pencil and paper, students can also benefit from the added visual an Elkonin Box can provide. Consider using an Elkonin box to support the SOS Method by following these modified steps below.
Step 1: Say and show the word:

Step 3. Tap out each phoneme.
Ask the student to say the word out loud by breaking each sound of the word down into its phonemes.

At this step, the student will tap a finger for each sound made. As an alternative, you can also provide students with blocks or counters to slide or tap as they make each sound. The method chosen will rely on what is comfortable to the student.

Step 4. The student spells the word aloud.
Ask the student to spell out the word. In this step, the student will spell out each grapheme of the word (the letter group that represents the individual phoneme). They can again tap their finger for each sound as they spell.

Step 5. Write the word.
The student will now write the word down, stating each letter as they write it. Check to ensure the student spells the word correctly and uses appropriate handwriting.

Step 6. Read the word
Ask the student to look at the word and again read the word back aloud.

Complete these steps for each word in your spelling list. Practice these words over several days before moving on to the next set of words. You can also use this strategy to review a series of words students have learned.

Adapting the SOS Method for use within an Elkonin Box:

Elkonin boxes are visual tools that help students understand each phoneme within a word. While the SOS Method is often implemented using just pencil and paper, students can also benefit from the added visual an Elkonin Box can provide. Consider using an Elkonin box to support the SOS Method by following these modified steps below.

Say and show the word:

Ask the student to repeat the word:

Tap each box with a finger for each phoneme:

Ask the student to spell the word aloud, while tapping each phoneme per box.

Ask the student to write the word down, with each sound corresponding to one box. You can also have the letters pre-printed into each box for very young students and ask students to trace over each letter.

Extension step 7:
Ask the student to re-write the word again below the Elkonin boxes.

Extension step 8:
When the child is ready, you can remove the aid of the Elkonin boxes and ask the child to write the words onto paper.