“I love ‘Dancing With the Stars’ so much, this season, I asked for a front-row seat.”

Alfonso Ribeiro is returning to the dance floor as a co-host for the new season of “Dancing with the Stars.”

In an announcement to Instagram, the “America’s Funniest Home Videos” host shared a video that appeared on his page as well as the show’s official Instagram that he would be joining Tyra Banks as the competitive reality series’ newest host.

“I love ‘Dancing With the Stars’ so much, this season, I asked for a front-row seat,” Ribeiro cheekily said in the clip.

“Well, guess what, Alfonso?” Banks replied excitedly in the next frame. “You’ve got it! And I cannot wait to see you in the ballroom.”

Alfonso continued, “Thanks, Tyra. I am so excited to be the new co-host of ‘Dancing With the Stars,’ and I’m as excited as all of you to see this season’s contestants compete for the Mirrorball.”

“Oh, my gosh, it is going to be an amazing season,” Banks said as she blew the camera kisses.

He captioned the announcement, “The news is out! I’m so excited to be the new co-host of @DancingWithTheStars, coming soon to @DisneyPlus, along with Host @TyraBanks!”

Alfonso is no stranger to the “DWTS” game, the “Fresh Prince of Bel Air” alum won the competition during the show’s 19th season in 2014 with pro Witney Carson.

In a press release, the “Shake It Up” director shared his enthusiasm in returning to the show he called “an important part of my life for so many years.”

“I am ecstatic to officially re-join this tight-knit family as co-host,” Ribeiro continued. “Tyra and I have a longstanding friendship that I hope will resonate with all of the fans at home as we kick off this new season on Disney+.”

The former supermodel shared Ribeiro’s sentiments and spoke of their longtime friendship, “I’ve known Alfonso since I was 19 years old and he always puts a smile on my face whenever I see him,” said Banks. “Having such a fun-loving, longtime friend as co-host warms my heart. Plus, he’s won the competition before, so he knows exactly what the stars are going through. Bantering back and forth with him live is going to be so much fun!”

It was also confirmed that Len Goodman, Carrie Ann Inaba, Bruno Tonioli and Derek Hough will be back as judges. 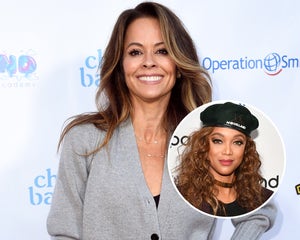 He also filled the shoes of longtime host Tom Bergeron during an episode in Season 21. Ribeiro also replaced Bergeron as the host of “America’s Funniest Home Videos” when he left the show in 2015.

Bergeron had hosted the first 28 seasons of the competitive reality show with Lisa Canning, Samantha Harris, Brooke Burke-Charvet and Erin Andrews joining him as co-hosts over the years.

Although Bergeron had a largely positive experience working on the series, he claimed there were conflicts with personnel changes and ultimately he could no longer “see eye-to-eye” with producers. He was especially vocal in 2019 with his objections over the casting of Donald Trump’s ex-press secretary Sean Spicer.

When ABC had announced the departure of Bergeron and Andrews in July 2020, the network added that the show would be heading in “a new creative direction” by hiring Tyra.

The new season is moving from ABC to Disney+, where it will be the first live series to debut on the platform starting this fall.