Alpina has had the ultra-rapid 3 Series estate market sewn up for quite some time. Ever since the days of the E36 generation, in fact, when the six-cylinder Alpina B3 Touring first emerged and was later joined by the rare B8 4.6 Touring replete with, yes, a 4.6-litre V8 (calm yourself).

But the monopoly is almost over. We’re now months away from the arrival of the first BMW M3 Touring, and you can bet the M wagon be a compelling and wildly quick machine. However, anyone in need of a medium-sized BMW estate with genuine Porsche 911-shaming performance would be foolish to dismiss the current B3 Touring, which has recently been facelifted.

With BMW updating the entire G20-generation range, Alpina has adopted some of the broader design tweaks and has also taken the opportunity to give the B3 yet more power and torque, plus marginal improvements in cooling and aero, all of which you would expect to make an already five-star car even more… five-starry.

We drove the updated saloon earlier this year and liked it very much, but really the B3 is all about the big-booted Touring derivative, especially in the UK. Of the mere 88 pre-facelift cars sold over here, just nine were saloons and the remaining 79 were estates. Note also just how rare Alpina’s wares remain. This is partly to do with the high asking price and partly down to lack of awareness among the general public, but the result is a degree of exclusivity that no M3 could ever dream of. Currently, the DVLA has roughly the same number of G20 B3s on its books as it does McLaren Sennas.

As for the car itself, fundamentally not much has changed. The most noticeable updates are the slightly more thuggish front bumper and, inside, the vast curving displays of the BMW’s iDrive 8 infotainment, which are a bit distracting compared with the neat screens of the pre-facelift B3, but on the various diagnostic readouts, they do now show an actual B3 Touring (and in the correct colour) where before there was a paltry 320i SE or somesuch. At last. 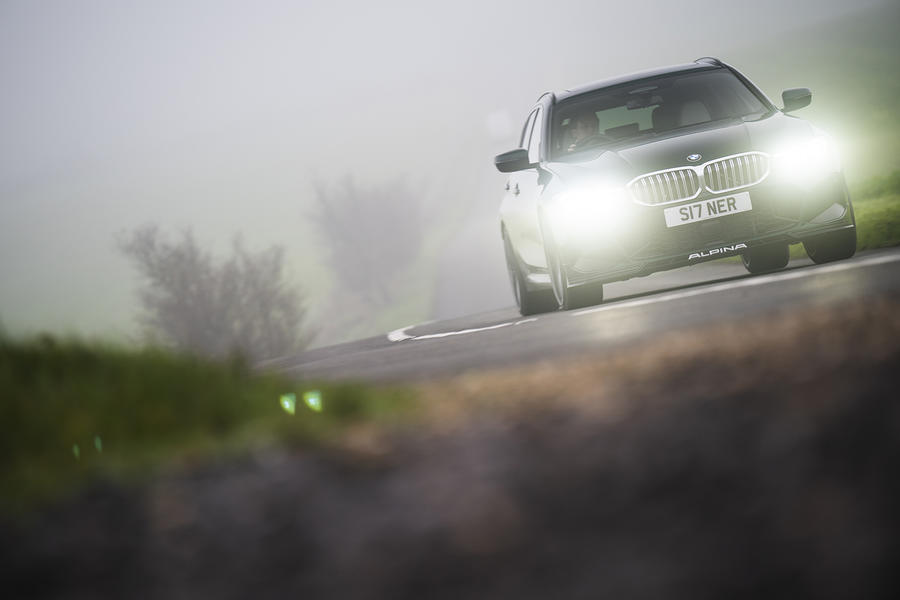 And the mechanicals? Also almost entirely unchanged. Four-wheel drive is standard and remains tuned to deliver a fractionally more even distribution of torque between the axles compared with the M340i on which the B3 is based. This is because with so much performance on offer, it’s just more sensible that way, especially given the car’s potential for nearly 190mph.

Upstream of the ZF-built eight-speed automatic gearbox sits a twin-turbocharged 3.0-litre straight six with plenty of bespoke cooling apparatus to cope with sustained high-speed driving. There’s also extra cooling for the gearbox and differential, although little if any of this is new compared with what you get on the pre-facelift car. The springs’ settings have been ever so slightly retuned and the car weighs a touch more than before, although we’re talking bags of sugar here, not anvils.

Of the main optional extras you’re likely to consider, our test car has most of them. Most obvious are the 20in forged multi-spoke wheels. With UK-appropriate pressures (there’s no need for the super-inflated, autobahn-ready approach on the M1), the Alpina-specific Pirellis provide a degree of absoprtion that belies the lack of sidewall, but equally it would be interesting to try the car on its standard 19in wheels. They’re not quite so classic in style but they’re still attractive and might unlock just a touch more rolling refinement on tricky road surfaces.