We’re often told that Alpina is all about ‘filling niches’ unexplored by BMW, and particularly its M division.

On the surface, this seems like a sensible idea. Why pick fights with cars that look similar to yours and that are almost perfectly matched in performance terms, but happen to wear a letter on their bootlids that almost everyone knows and admires (although the new BMW XM will test this to breaking point)?

Were it only that simple. In reality, Alpina’s cars can’t be considered merely as straight substitutes for M products where M products don’t exist – the DNA is largely shared but the personalities surprisingly different, and so the niche-filling approach isn’t needed, and rarely if ever executed in the strict sense.

Consider the current range. The flagship Alpina B8 Gran Coupé co-exists with the BMW M8 Gran Coupé, the (recently retired) B7 with the M760Li, the XB7 with the X7 M60i, B5 with M5, B3 with M3, and we won’t mention the various diesel offerings because it’s much the same story. The fact is that with an M3 Touring already announced, the only actual niche-filler in the Alpina line-up is the B5 Touring.

Or at least it was until now. While the previous Alpina B4 came in only two-door coupé form and with performance to seriously concern its M4 cousin, the new B4 arrives in only four-door Gran Coupé guise. BMW doesn’t make an M4 Gran Coupé, so if you want a 4 Series with back doors and almost as much torque as a Ferrari F8 Tributo, the B4 Gran Coupé is your only bet. 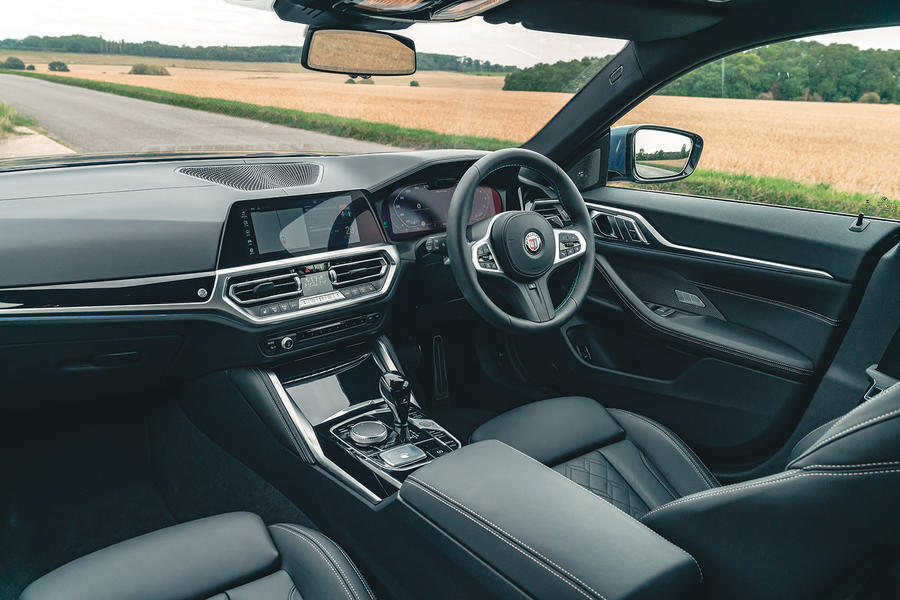 At £79,900, it’s also an expensive one, although even a basic BMW M4 Competition now costs £78,000, so perhaps the Alpina is fair value, relatively speaking. Neither is there any skimping on hardware. The same M-built 3.0-litre straight six first seen in the fabulous Alpina B3 sits up front with 488bhp and 538lb ft. It’s an elephantine torque output and is put to all four wheels through an Alpina-fettled eight-speed ZF torque converter. There’s also an electronically controlled LSD at the rear, plus the same raft of powertrain cooling and strengthening modifications found in the B3.

But lest you think the B4 GC is merely a reskinned B3 saloon, know that new underfloor bracing at the rear as well as artful, skeletonised strut braces in the engine bay and a stiffer front anti-roll bar make the chassis more torsionally rigid. The larger, 20in wheels also give the car the same massive contact patch as the 600bhp B5.

Because of the improved rear traction this brings, Alpina has made the torque split less neutral than that of the B3 and more rear biased. Equally, the B4 Gran Coupé’s marginally taller sidewalls should also give it better ride comfort than that of the B3. All in, it’s a car conceived firmly in the long-snouted GT mould, blending long motorway legs with extreme cross-country pace. On paper, the B4 is more capable than the B3, despite being 3mph slower, topping out at 187mph – faster than any M-car except the M5 CS.

It all sounds very grand but the magic of the B4 is how it manages to feel intuitive in almost any environment. On motorways, it really is beautifully refined and comfortable, and while you often don’t need it, the Alpina-specific Comfort Plus damper setting gives the car such a cushioned and fluent ride for something wearing 20in wheels. Living with an M4 can be tiring at times but the B4 borders on the therapeutic for something that’ll lunge to 62mph in 3.7sec (which, incidentally, matches the hardcore new BMW M4 CSL to the very tenth).