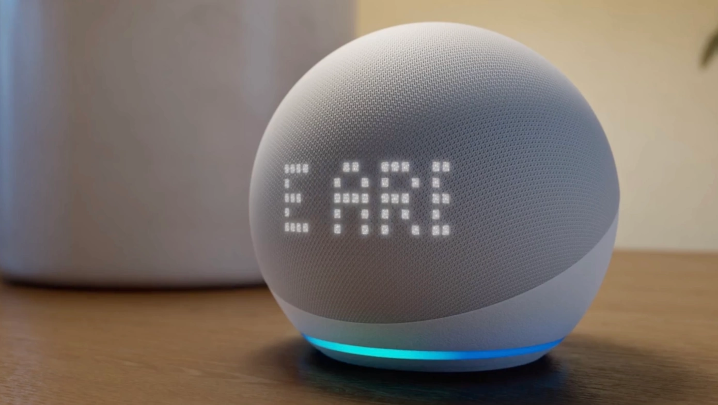 Amazon.com Inc. today expanded its portfolio of consumer devices by introducing a new Kindle e-reader, the Kindle Scribe, and a sleep tracker with machine learning capabilities.

The company also refreshed its Echo lineup of smart speakers. Amazon is rolling out three new Echo devices, two of which include an upgraded eight-core processor touted as 20% faster than the previous-generation silicon.

The latest addition to Amazon’s  popular Kindle line of e-readers is the Kindle Scribe, a 10.2-inch device that will go on sale for $340. The Kindle Scribe’s display offers a resolution of 300 pixels per inch, a first for an Amazon e-reader. The company says that the device can support half an hour of reading per day for 12 weeks on a single charge.

Customers can optionally order the Kindle Scribe with one of two styluses known as the Basic Pen and the Premium Pen. Both devices work without the need for charging and can be magnetically attached to the e-reader when they’re not actively used. The Premium Pen offers several features not included in the Basic Pen, including an eraser button.

Alongside the Kindle Scribe, Amazon introduced updated versions of its Echo Dot and Echo Dot with Clock devices. The former device is an entry-level product that is available for a lower price than several of Amazon’s other smart speakers. The Echo Dot with Clock, in turn, is an upgraded version of the standard Echo Dot with a display that shows the time.

The new versions of the Echo Dot with Clock and Echo Dot feature an improved eight-core processor. According to Amazon, the processor  provides 20% more performance than the six-core chip that powered the previous iterations of the devices. The devices also feature support for Wi-Fi 6E, a new version of the Wi-Fi standard designed to reduce network interference in locations with a large number of wireless devices.

The Echo product series is one of several connected device lineups that Amazon offers. Amazon also sells the Halo line of health and fitness devices, which the company is expanding today with the introduction of a new sleep tracker called the Halo Rise.

The Halo Rise uses sensors powered by machine learning software to estimate the quality of the user’s sleep. According to Amazon, the device delivers its findings in the form of a report that also includes environmental data such as room temperature, humidity, and light levels. Using the environmental data collected by the Halo Rise, a companion app called Amazon Halo provides sleep improvement recommendations.

Amazon ships Echo smart speakers and the new Halo Rise with its Alexa voice assistant, which is also receiving an update.

A new feature called Smart Home Suggestions will enable Alexa to notify users if they are away from home and may have left a door unlocked. After receiving such a notification, users can ask Alexa to lock the door. Another new capability, Alexa Edge Extensions, will enable Amazon’s newest Echo devices to change the settings of previous-generation Echo hardware in response to user commands.

Amazon also debuted a feature called Amazon Roadside Assistance that is designed for drivers. With the feature, drivers can ask Alexa to contact a roadside assistance provider when they encounter an issue while on the road.

The feature is accessible through the Alexa app as well as several Echo devices including the Echo Auto, which is specifically designed to be used in vehicles. Alongside the Alexa updates, Amazon today debuted an updated version of the Echo Auto with a streamlined chassis design.

Alongside the updates to Alexa and the Echo smart speaker lineup, Amazon today refreshed several other product portfolios. The company debuted two new Fire TV displays that can automatically adjust their screen settings based on room brightness levels. Amazon also introduced an upgraded Fire TV Cube streaming device, along with several new home security products that will become available as part of its Ring product lineup.

Amazon’s eero series of networking device, in turn, will be expanded with two new devices. The first is a Wi-Fi router known as the eero PoE 6 that can provide wireless coverage spanning up to 2,000 square feet and support as many as 100 devices. It’s joined by the eero PoE 6 Gateway, a device designed to support wired networking connections that promises to facilitate connection speeds of up to 10 gigabits per second.