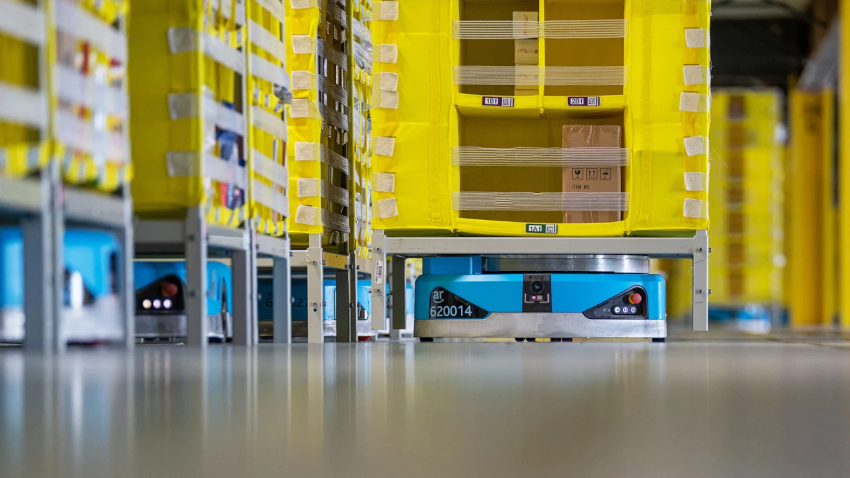 Amazon.com Inc. today detailed a set of new automation systems that its engineers have developed to increase the efficiency of its fulfillment centers.

The systems are headlined by Proteus and Cardinal, a pair of new warehouse robots. Both are designed to help with the task of processing e-commerce packages.

Proteus is a compact, two-wheeled robot that can pick up a cart containing multiple packages and move the cart from one section of a warehouse to another. Amazon describes the system as its first fully autonomous mobile robot. According to the company, Proteus uses artificial intelligence to navigate and can charge itself automatically when the onboard battery is running low.

Warehouse robots often have a limited ability to avoid obstacles and, as a result, are frequently deployed in isolated sections of a warehouse to avoid collisions. Proteus’ AI navigation algorithms enable it to automatically “move around employees — meaning it has no need to be confined to restricted areas,” Amazon stated.

According to the company, the fact that the robot is designed to operate alongside workers creates new opportunities to streamline the package processing workflow. In particular, Amazon plans to deploy Proteus at a section of its fulfillment centers and sort centers known as the outbound GoCart handling area. The company eventually intends to use the robot in other warehouse sections as well.

Amazon detailed Proteus alongside Cardinal, an internally developed robotic arm that can automatically pick up a package, read its label and place the package in a cart. The cart can then be moved to the next section of an Amazon fulfillment center for further processing.

Amazon says that Cardinal is designed to enhance worker safety at its facilities. Cardinal can lift heavy packages and help with complex packaging tasks. Moreover, the robot operates in a confined area to limit the risk of accidents.

Amazon is currently piloting a prototype version of Cardinal that can lift packages weighing up to 50 pounds. Once the robot is deployed in Amazon’s warehouses, the company hopes that it will not only improve worker safety but also reduce the amount of time required to process packages. Cardinal makes it possible to sort packages earlier in the parcel preparation and delivery process, Amazon stated, which the company believes will create opportunities to speed up the workflow.

Alongside the new robots, Amazon detailed two more automation systems that have been developed by its engineers.

The first system increases worker safety by reducing the need for warehouse workers to perform tasks such as climbing ladders. The second addition to Amazon’s automation infrastructure, meanwhile, is an AI-powered device that can automatically scan the barcode on a package. According to the company, the device removes the need to scan barcodes manually and thereby increases worker safety while simplifying package processing tasks.

Many of Amazon’s internally designed automation systems are developed by its Amazon Robotics division. The company formed the division after acquiring a robotics startup called Kiva Systems Inc. in 2012 for $775 million. Since then, Amazon has acquired at least one other robotics startup: it purchased warehouse automation specialist Canvas Technology Inc. in 2019 for an undisclosed sum.

Warehouse automation has also emerged as a focus of Amazon’s startup investment strategy. In April, it launched a $1 billion fund to back companies working on new supply chain technologies. Several of the startups in which the fund has invested so far focus on the warehouse robotics market.