Amazon.com Inc. revealed at its re:Mars conference today that it has put one of its AWS Snowcone edge computing and storage devices into orbit, as part of Axiom Space Inc.’s latest mission to the International Space Station.

Snowcones are special devices that are designed to operate in rugged, mobile and disconnected environments, bringing onsite processing capabilities with multiple layers of encryption. Amazon said the one sent into space was a regular, off-the-shelf device that had been put through months of testing by the National Aeronautics and Space Administration to get it certified.

Amazon said the Snowcone endured five months of NASA’s thermal, vacuum, acoustic and vibration tests before it could be signed off for the mission. No radiation testing was required, though, since the Snowcone was deployed within a shielded environment within the ISS.

Once the device was delivered to the space station, it was then connected to ISS’ systems. Later, the team behind the project uploaded an object detection machine learning model and ran it throughout the duration of Axiom’s mission.

The Snowcone experiment was just one of 25 performed by Axiom on its mission. Clint Crosier, director of Aerospace and Satellite at AWS, explained that as part of the mission, astronauts had to take photos of all the new equipment brought onboard the ISS, as well as everything that was being shipped back to Earth. The object detection model played a role in cataloging each of these items.

The mission was really more of a demonstration, but the results are useful. In space, bandwidth is limited because the ISS only has minimal infrastructure. Amazon explained that traditional computing resources are bound by the conditions of human spaceflight, while data transport pathways are heavily congested.

What this means is that astronauts typically have to send the data and images they collect back to Earth to be processed. This is not such a big deal while in near-Earth orbit, but on future missions to the moon and Mars, sending data back home will experience significant delays given the enormous distances involved. 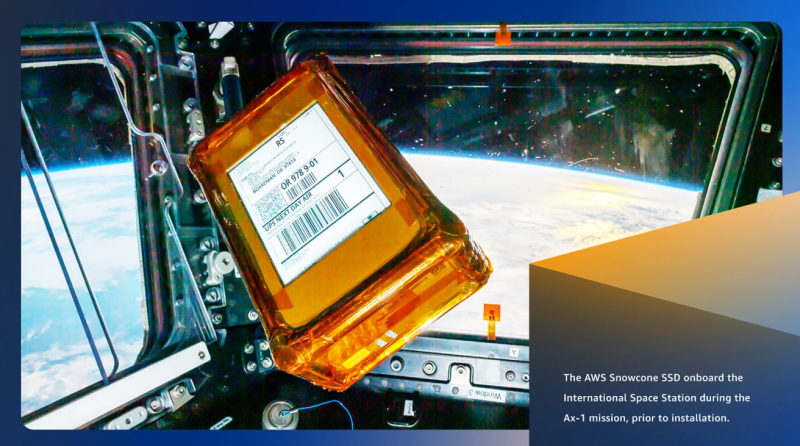 As such, having an edge computing capability on board could prove to be extremely useful. So the lessons learned from this mission can be applied to later missions, Amazon said.

“AWS is committed to eliminating the traditional barriers encountered in a space environment, including latency and bandwidth limitations,” Crosier said. “Performing imagery analysis close to the source of the data, on orbit, is a tremendous advantage because it can improve response times and allow the crew to focus on other mission-critical tasks. This demonstration will help our teams assess how we can make edge processing a capability available to crews for future space missions.”