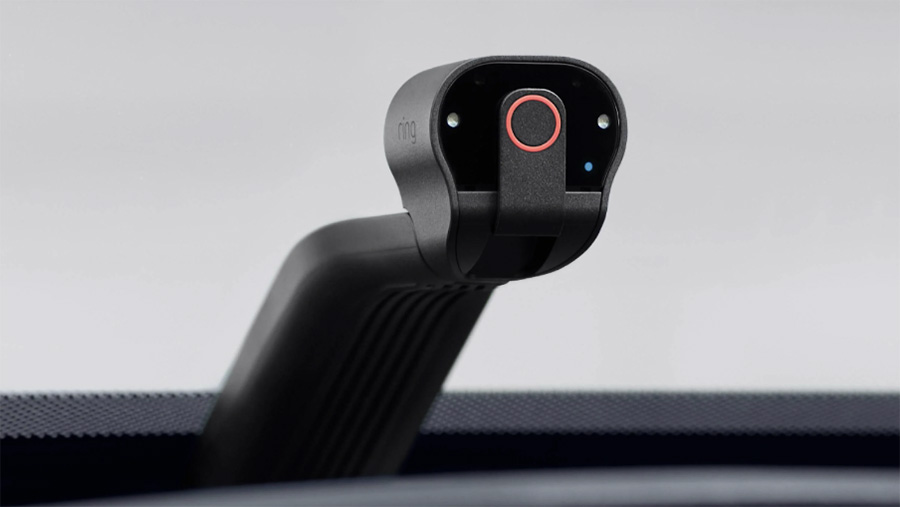 The Ring Car Cam is the first dashboard camera built by Ring, which is best known for its doorbell cameras. The cameras will provide video security for users away from home and features dual-facing high-definition, wide-angle cameras with night vision to protect against break-ins and film events when driving.

Using motion alerts with real-time notifications, the camera can contact the owner on the phone and send video via home WiFi. There is also a microphone and light in the camera itself allowing two-way talk capability with the Ring app when the car is parked and connected to WiFi or a cellular network.

In order to protect user privacy, the camera has a built-in cover that can be pulled over the inside-facing camera that also electronically cuts out the microphone.

To make installation easy, the camera uses a plastic bar affixed to its back that can be secured to the dashboard or to the windshield. For power, it plugs into the OBD-II port, which is ordinarily used for onboard diagnostics and located beneath the dashboard, instead of needing to be wired into the electrical system.

The camera is also capable of video recording automatically or on demand. The camera comes with a subscription plan, called Ring Protect Go, which costs $6 per month or $60 per year, which adds LTE cellular connectivity.

With the addition of the subscription, users can save events on demand to the cloud for up to 180 days. And users can also have access to an on-demand Traffic Stop feature by using the command, “Alexa, record,” which will automatically start recording during a stop or after a traffic incident.

Amazon’s Sidewalk network, designed to connect outdoor smart home tech beyond the range of WiFi using Ring, Echo, and other devices, today announced that it was adding new partners and that it would open to third-party developers.

Announced in 2019, Sidewalk controversially doesn’t just connect to a customer’s own devices, but will also automatically share WiFi across those devices owned by neighbors as well. It does this to create a low-bandwidth mesh network in order to interconnect devices at much longer ranges and it operates this way unless users opt out.

The ideal use case for this is for internet of things devices, which do not need a large amount of network bandwidth, but often exist on the edges of networks and operate sensors that otherwise don’t require a lot of power. Due to this, these devices can suffer from dropouts in connectivity, and having the availability of a mesh-mesh network can make sure that they stay in contact.

Meshify provides leak and freeze detection devices that can connect to the internet to alert customers before damage occurs to their homes or businesses. Deviceroy uses Sidewalk for its solar inverters, which allows customers to view how their equipment is operating.

Amazon is now opening up its Sidewalk network with new third-party tools for developers, which will permit “live access to data and analytics” and allow developers to track the performance of connections and applications built for the network.