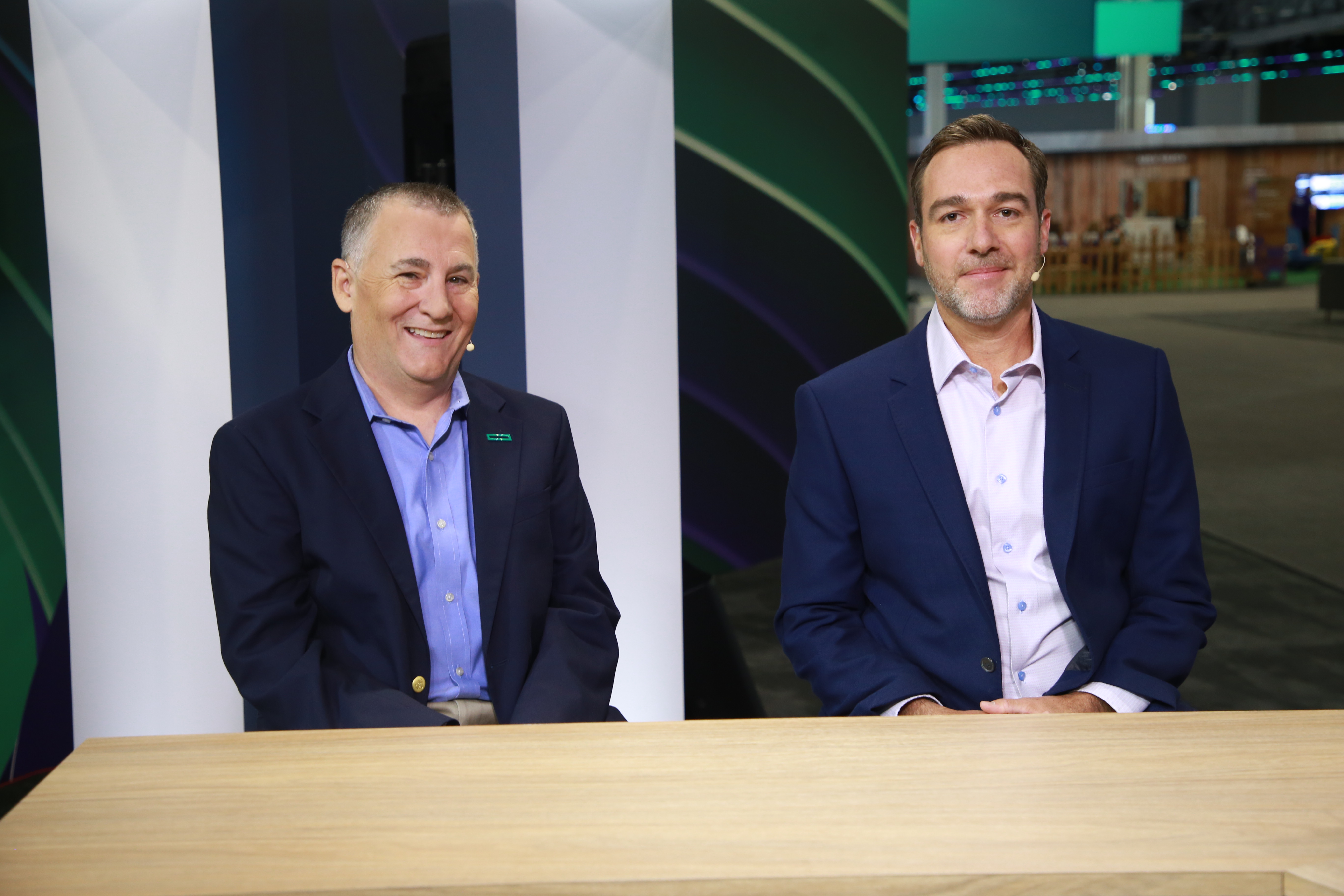 Since the data center is the computational heart of an organization, it has a wealth of opportunity from an energy- and mission-savings perspective.

A perfect storm is brewing as more companies set environmentally friendly goals. For instance, 60% of the Fortune 500 have climate- or energy-efficient objectives, according to Justin Murrill (pictured, right), director of corporate responsibility at Advanced Micro Devices Inc. A partnership between AMD and Hewlett Packard Enterprise Co. is advancing this initiative by modernizing data centers.

“AMD and HPE have been working together on advancing sustainability for many years,” Murrill stated. “Most recently, the top 500 and the green 500 list of supercomputers came out and at the top of that list are AMD-HPE systems. So the fastest and most energy-efficient system in the world is the Frontier supercomputer by AMD and HPE. I’m still just blown away by this billion calculations per second.”

Murrill and John Frey (pictured, left), chief technologist, sustainable transformation at HPE, spoke with theCUBE industry analysts Dave Vellante and John Furrier at HPE Discover, during an exclusive broadcast on theCUBE, SiliconANGLE Media’s livestreaming studio. They discussed how AMD and HPE are working together to make IT sustainable for the greater good of society. (* Disclosure below.)

IT systems a stepping stone toward carbon-free objectives

Given that sustainable IT is a hot topic, more research is being geared toward clean and alternative energy sources. As a result, HPE and AMD helped develop the LUMI supercomputer that is carbon-negative, according to Murrill.

“The LUMI  system … is 100% powered by renewable energy,” he explained. “Not only that, it takes the heat and channels it to a nearby town and covers 20% of that town’s heating needs, thereby avoiding 12,400 metric tons of carbon emissions.”

Since overall power consumption will continue increasing, combining scalability and efficiency in IT systems will be fundamental, according to Frey. Therefore, high-performance systems in smaller footprints are filling the void.

“Direct liquid cooling is becoming more and more in use,” he noted. “Customers are really interested. There’s shifting from industry standard architectures to lower end and high-performance computer architectures to get direct liquid cooling and higher core processors and get the performance they want in a higher footprint. One of the things that Frontier and LUMI do so well is they were designed from the start as a system, not as piece parts making up the system.”

The recognition of sustainable IT initiatives is happening now more than ever before. By reducing over-provisioning and increasing utilization not only are maintenance and software licensing costs saved, but also power consumption and environmental benefits are accrued, according to Frey.

“We actually had IDC do a survey for us last year, and we asked 500 senior IT executives, ‘Were you implementing sustainable IT programs and why?” he said. “My guess was initially about 40% of them would say yes, but actually the number was 96%.”

Based on the IDC study, some of the primary drivers of sustainable IT strategies are institutional investors, customers and employers. Therefore, enterprises are being made to adopt environmentally friendly initiatives to retain them, according to Frey.