The roadmap revealed some key details about the upcoming Ryzen 7000 processors, which will be used to power desktops and workstations. Alhough the company didn’t provide any hard numbers on performance, it signaled a big improvement nonetheless.

What AMD did say is that the Ryzen 7000 chips will provide an 8% to 10% increase in instructions per clock, and come with a 25% performance-per-watt advantage over the Ryzen 500 central processing units. The company also reiterated something it said at the Computex event last month, saying that the Ryzen 7000 CPUs will have a “greater than 15% single-core performance increase.”

It stressed that this is a very conservative estimate. Overall, AMD claims that Ryzen 7000 will be 35% faster than its previous generation chips, which is a fairly big boost.

Another key product on the roadmap is the Threadripper processors built on the Zen 4 architecture. The Threadripper 7000 CPUs for desktops are expected to launch in early 2023.

AMD didn’t stop there, as the roadmap also revealed a few details on its up and coming Zen 5 CPUs. These are set to arrive in 2024 and will provide a more significant performance boost, the company promised. Notably, they’ll be built on a four-nanometer manufacturing process, AMD executives said.

Holger Mueller of Constellation Research Inc. said AMD was among a number of chip makers that are looking to achieve the impossible by reducing power consumption and increasing performance. “AMD is succeeding too, with its new Ryzen 7000 chips doing exactly that,” he said. “This will lead to new performance and cost dimensions for next-generation applications in the near future, all while consuming less power.”

The chip industry is trying to do the impossible – more performance while lower power consumption, and it is succeeding, as AMD has shown. Its new Ryzen 7000 chips realize exactly that – which will open new performance and cost dimension for powering next generation applications in the near future – all while consuming less power.

The company didn’t reveal much else, but it has been speculated elsewhere that AMD may use a multinode architecture for the Zen 5 CPUs, similar to Intel Corp.’s Alder Lake chips. AMD added fuel to these rumors, talking up its fourth-generation Infinity architecture that enables multinode designs.

As for AMD’s line of laptop processors, the company explained that after the recent launch of its Ryzen 6000 mobile CPUs, its focus is now firmly on the next-generation Phoenix Point chips slated to arrive in early 2023. These chips will also be based on Zen 4 cores and built using a four-nanometer process. More exciting, perhaps, these next-gen mobile CPUs will come with RDNA-3 graphics capabilities built in. That’s the same architecture as AMD’s up and coming RX 7000 graphics processing units.

It’ll be an interesting one to watch, because most analysts feel AMD has until now trailed Intel in laptops. However, the company is now becoming more focused, and the Ryzen 6000 chips are expected to be much more competitive. AMD said the Phoenix Point chips will target a power range of between 35 and 45 watts for high-performance laptops. 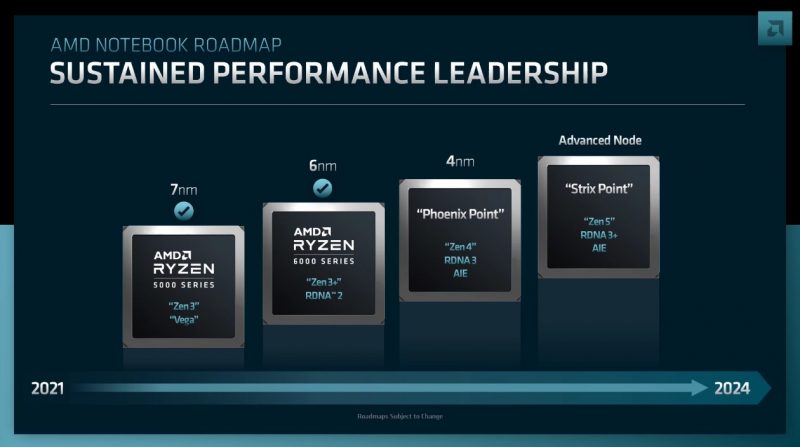 Looking further ahead, AMD discussed its future Strix Point desktop CPUs based on Zen 5 CPU cores. The company didn’t mention the manufacturing process and details so far are light, though it did say they will support RDNA 3+ graphics, which seems to be a superior version of its upcoming new graphics architecture.

Finally, AMD said both Phoenix Point and Strix Point will feature an artificial intelligence-powered engine developed by Xilinx, the company it recently acquired for $50 billion. AMD didn’t say much about what this engine will do, but possible features include improved battery life, webcam performance and reduced system noise.