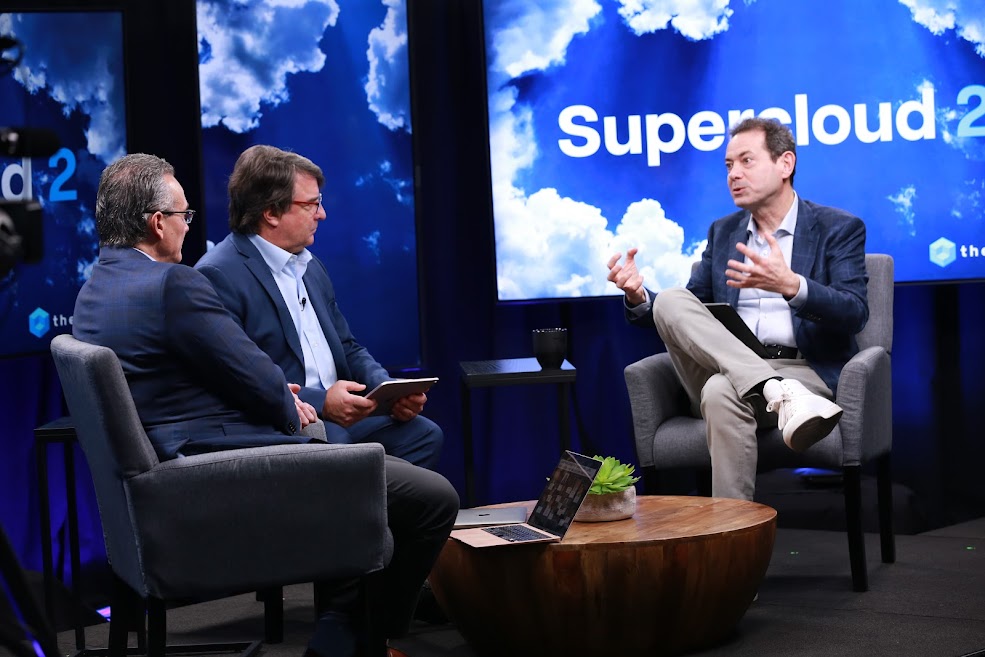 Supercloud has been called a “paradigm shift,” a “void filler,” and an innovative way to reduce the risk of “shadow IT.”

Yet, as theCUBE’s recent Supercloud2 broadcast has demonstrated, whatever label is applied to define supercloud points to the same conclusion. There is a sea change underway in the enterprise cloud world today.

“This is a wave that’s been identified,” said John Furrier (pictured, center), industry analyst for theCUBE, SiliconANGLE Media’s livestreaming studio. “It is a gateway to multicloud eventually and it is the standard for new applications, new ways to manage data. We’re seeing things like AI and machine learning and data at the center of it and new infrastructure of all kinds coming together. That is the big story, and it’s going to change society and ultimately the business models of companies.”

Furrier spoke with theCUBE industry analyst Dave Vellante (pictured, left) and George Gilbert (pictured, right), principal analyst and investor at TechAlpha Partners, at Supercloud 2 during the event wrap of an exclusive broadcast on theCUBE. They discussed key takeaways from discussion throughout the Supercloud2 event. (* Disclosure below.)

Moving beyond data as code

There was evidence presented in several of the Supercloud2 sessions that major enterprises were beginning to embrace a new breed of data applications that can autonomously orchestrate action beyond what’s written in code.

Major cloud providers such as Amazon are unlikely to fall by the wayside in the face of this new era for data applications, according to the analysts. Yet the signals are also becoming more apparent that the next wave of technology innovation may come from outside the hyperscalers’ sphere of influence.

“The hyperscalers are going to continue to do their thing and be very successful,” Vellante said. “The next wave of innovation, which is coming from data, is going to come from other places. Organizations want to be able to share data across clouds, across their organization and outside of their ecosystem, and make money with that data sharing. There will be real-time inferencing at the edge with AI and being able to do new things with data that we haven’t even seen.”

Cross-cloud exchange will result in the creation of new infrastructure to handle new ways of managing data. This is likely to result in a major shift among enterprises in how operations are structured, according to Furrier.

“It’s all about infrastructure refactoring,” he said. “You’re going to see infrastructure influencing operations that will enable superclouds to be real. It’s the operations focus that’s going to be very critical. That’s my big takeaway today.”

There’s much more on supercloud at theCUBE’s Supercloud 2 event page.

(* Disclosure: This is an editorial segment. TheCUBE is a paid media partner for Supercloud2. Sponsors for theCUBE’s event coverage do not have editorial control over content on theCUBE or SiliconANGLE.)