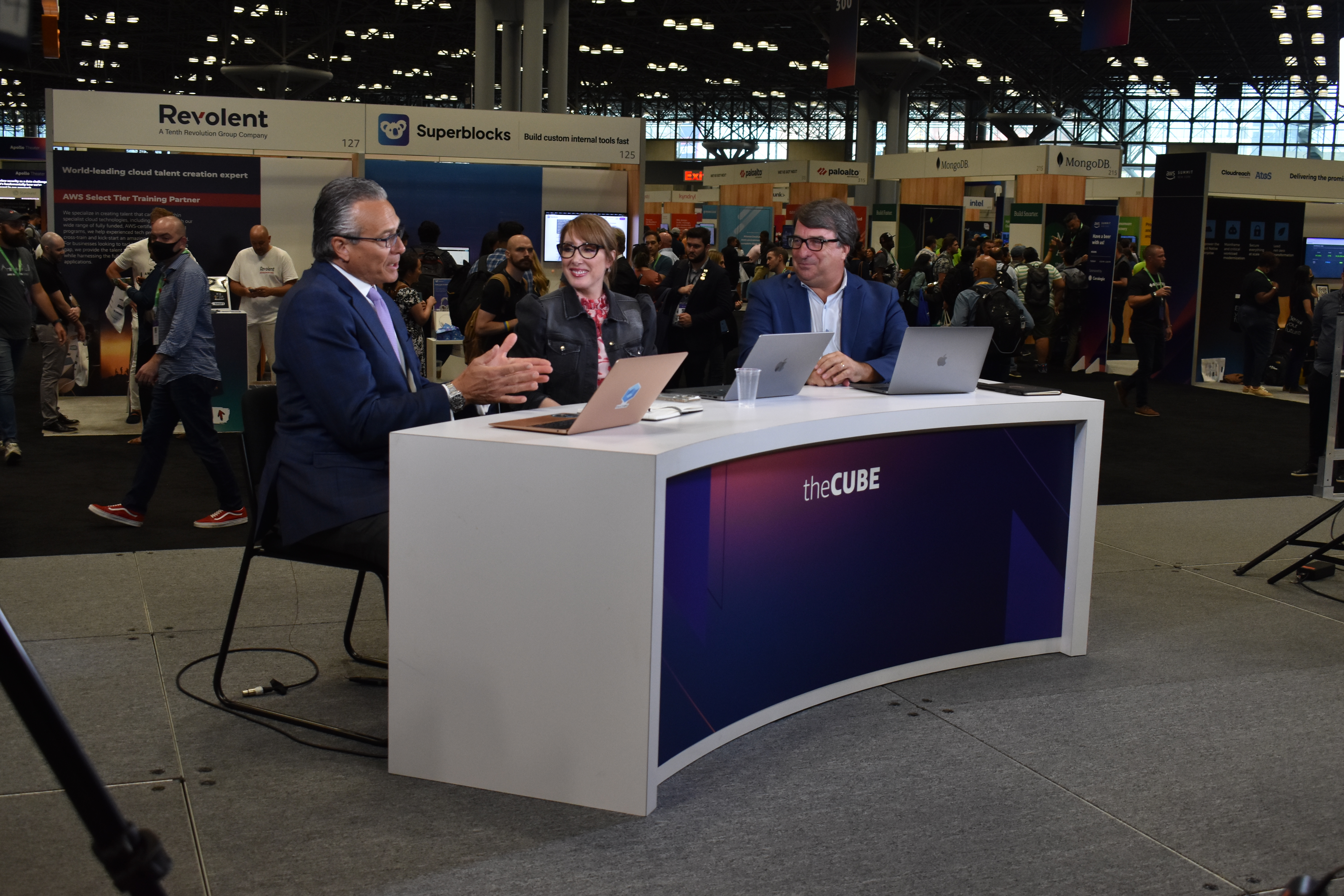 Analysts at SiliconANGLE Media and in other segments of the tech industry have characterized the latest chapter in this disruption as a rise of the supercloud.

“Companies are making so much money building on top of AWS, and there’s also cross clouds, so we said there’s something new happening in the ecosystem,” said Dave Vellante (pictured, left), industry analyst for theCUBE, SiliconANGLE Media’s livestreaming studio. “The term ‘supercloud’ came up to connote a layer that floats above the hyperscale CapEx. It’s not IaaS, it’s not PaaS, it’s not SaaS; it’s the combination of those things on top of a new digital infrastructure.”

Vellante spoke with fellow analysts John Furrier (pictured, right) and Lisa Martin (pictured, center) for the kickoff segment at the AWS Summit New York event, during an exclusive broadcast on theCUBE, SiliconANGLE Media’s livestreaming studio. They discussed the key elements behind supercloud and how it is changing ways that businesses can refactor entire industries. (* Disclosure below.)

Building on the hyperscalers

A prime example of the supercloud principle in action can be seen in the growth of Snowflake Inc. The Data Cloud provider built its business on top of the AWS platform, and it has emerged as a powerhouse that now spans multiple clouds and supports distributed data at scale.

“What we’re observing is that Snowflake didn’t design their solution to be multicloud; they did it all on AWS,” Furrier noted. “Then they said: ‘Why would we stop there? Let’s go to Azure, because Microsoft’s got a boatload of customers.’”

The willingness of hyperscale players, such as AWS and Microsoft, to allow the creation of major businesses on top of cloud platforms has resulted in a cooperative model benefitting all involved. The major cloud providers sell more server usage and services, while enterprising business customers can build market presence.

“We just had AWS and Snowflake on theCUBE a few weeks ago talking about the partnership, the ‘co-opetition’ and the value in it,” Martin said. “What’s driving it is the voice of the customer.”

The analysts have noticed that other key industry players are coming to embrace the supercloud model, based on an interest in meeting specific IT needs.

“Protecting privacy or sovereignty, or how many copies to make for proper data protection, or where the air gap should be for ransomware, are examples of very specific purpose-built superclouds that are filling gaps the hyperscalers aren’t going after,” Vellante said. “What Oracle is doing with Azure definitely looks like a supercloud. What Veeam is doing in data protection, what Dell showed at Dell Technologies World with Project Alpine are all early examples of supercloud.”

The rise of supercloud is being driven by a number of notable trends in the IT world, including distributed computing, automation, and the need for hybrid infrastructure. On August 9, theCUBE will broadcast a special discussion around technology, ecosystems, data, monetization and a new architecture built around supercloud.

“People that are looking at the old models, like operating systems or systems mindsets from the ’80s, they’re not understanding the new architecture,” Furrier said. “Now I have cloud scale. What if I refactored my business model, became a supercloud, and became the major primary service provider to all the competitors and people that are channel partners of the ecosystem? It means that company could change the category.”

(* Disclosure: This is an unsponsored editorial segment. However, theCUBE is a paid media partner for the AWS Summit New York event. Amazon Web Services Inc. and other sponsors of theCUBE’s event coverage have no editorial control over content on theCUBE or SiliconANGLE.)