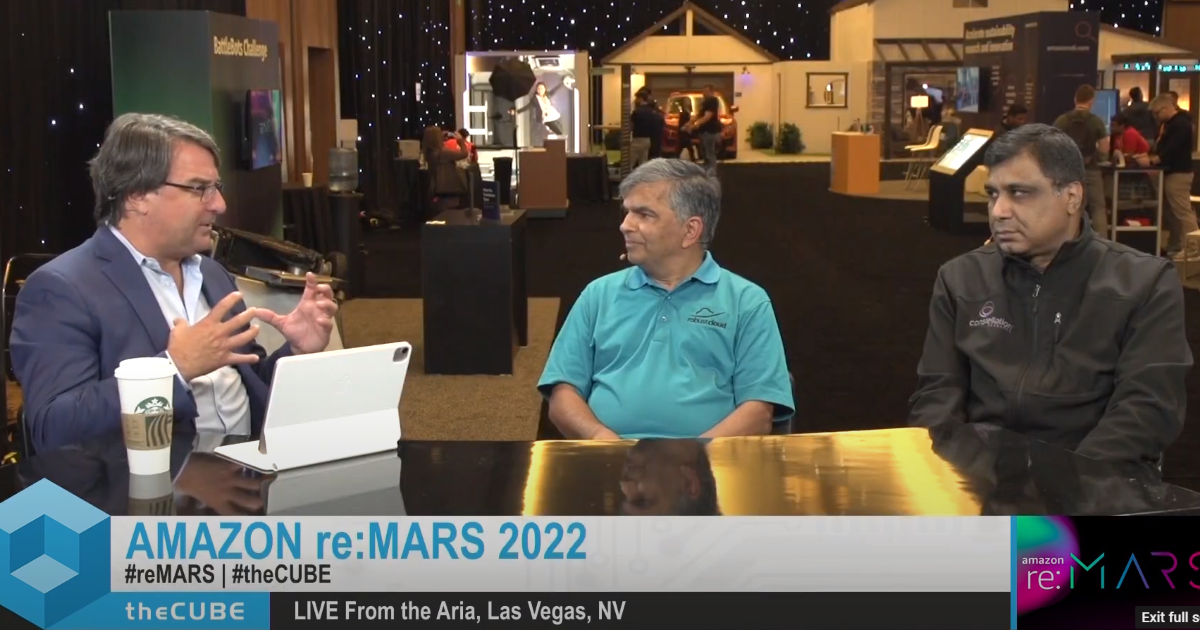 Amazon Web Services Inc.’s event trilogy started 10 years ago with re:Invent, extended into the security sphere with re:Inforce and headed out into the wild frontiers of machine learning, automation, robotics and space with re:MARS.

If the evolution of events can be seen as a map of the technological change Amazon has fostered, re:MARS is the conference that offers a glimpse into the future of enterprise technology.

“When AWS started, it primarily took the compute storage, networking of Amazon.com and put it as a cloud service and started selling the heck out of it,” said Larry Carvalho (pictured, left), principal consultant at RobustCloud LLC. “It’s now the second phase of innovation, which is beyond digital transformation of back-office processes to the transformation of physical processes.”

Carvalho and Andy Thurai (pictured, right), vice president and principal analyst at Constellation Research Inc., spoke with theCUBE industry analyst John Furrier at Amazon re:MARS 2022, during an exclusive broadcast on theCUBE, SiliconANGLE Media’s livestreaming studio. In a panel discussion, the analysts shared their impressions of re:MARS 2022, taking a look at the real-life impact of the tech on display. (* Disclosure below.)

While general attendee sees re:MARS as an exciting event that shows off the latest advances in robotics, space, automation and machine learning, industry analysts such as Carvalho and Thurai connect the dots from innovation to practical business use cases.

“When you move from a compute economy into a data economy, there are things that come into the forefront that never existed before,” Thurai said.

The melding of machine learning and robotics has led to huge advances in robots. Boston Dynamics Inc. robot “dog” Spot is already working in dangerous environments and has been trained to react to changing environments. But the most unbelievable thing to Thurai is how people are relating to the machine walking around as if it were a sentient being.

“It has come to that level that people are able to not look at that as a robot, but as more like a functioning, almost like a pet-level, human-level being,” he said.

Current industrial robots are “all still in an experimentation, innovation phase,” according to Thurai. But he has heard several practical industrial internet of things use cases for robots while walking the show floor.

Network and bandwidth limits restrict the number of sensors that can practically be accommodated in a given area, and the costs of installing sensors are high. But, what if instead of going the fixed sensor route, companies use sensors on robots that can roam the factory floor?

Three or four robots would cost around a hundred thousand dollars, according to Thurai.

“[So,] if you had to install an entire factory floor of sensors, you’re talking about millions of dollars, but if you do the movable sensors in this way, it’s a lot cheaper,” he said.

While the possibilities at the edge are endless, AWS needs to evolve its edge strategy to keep competitive, as Dell Technologies Inc. and HPE Inc. make a play for the edge market. In particular, Furrier noted that he has experienced customer dissatisfaction with the company’s edge solution AWS Outposts.

Although he agrees that Outposts is “definitely not Amazon’s strong point,” Carvalho gives the solution credit for ease of use. “Like everything, they try to make it easy to use,” he said.

AWS’ SageMaker Canvas no-code machine learning/artificial intelligence tool is an example of the company’s ability to democratize access to innovative technology, according to Carvalho.

“What they have done … with low code/no code is very powerful with Canvas, and I think that has really grown the adoption of AI,” he stated. “People are just saying, ‘Hey, let me kick the tires. Let me use it. Let me try it.’”

AWS could improve by being more proactive in the open-source community, according to Carvalho. He suggests that AWS consider open-sourcing some of its hardware.

“They got Graviton. They got a lot of stuff,” he said. “Will they be able to share the wealth with other folks, other than just being on an Amazon site, on the edge with their partners?”

Being less tech-orientated and positioning solutions to be more friendly to the business user could be a “game-changer” for AWS, according to Thurai.

“If you look at the way they suggest implementation, the innovations, everything that comes out comes out across very techy-oriented,” he said. “If they could appeal or build a higher-level abstraction of how to build and deploy applications for business users or even build something industry-specific, that’s where a lot of the legacy companies succeeded.”

Here’s the complete video interview, part of SiliconANGLE’s and theCUBE’s coverage of the Amazon re:MARS event:

(* Disclosure: This is an unsponsored editorial segment. However, theCUBE is a paid media partner for Amazon re:MARS. AWS and other sponsors of theCUBE’s event coverage have no editorial control over content on theCUBE or SiliconANGLE.)