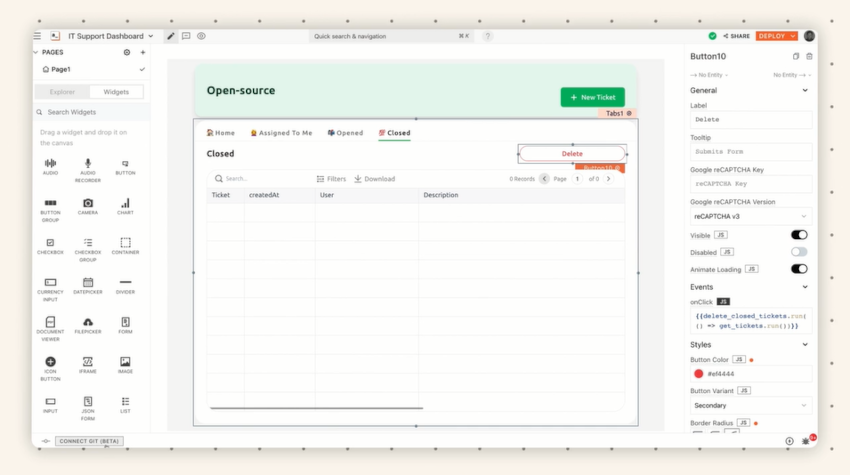 Appsmith Inc., a startup competing in the low-code software development market, today announced that it has closed a $41 million funding round led by Insight Partners.

Low-code development tools enable software teams to build applications with less manual work than the task usually requires. Such tools usually offer pre-packaged application components that remove the need to build everything from scratch, which saves a significant amount of time. The result is that software teams can create new applications faster.

San Francisco-based Appsmith provides a specialized low-code development platform focused on helping companies build applications for internal use. A company could, for example, use the platform to create a program that helps its supply chain team track inventory levels. Or it might build a tool to process technical support requests.

One of the most complicated, and consequently time-consuming, tasks involved in building an application is setting up the database that will store the application’s data. Appsmith provides pre-packaged connectors for popular databases to ease the task. The platform supports multiple SQL and NoSQL systems, as well as cloud services such as Amazon S3 that applications commonly use to store information.

Building a new application also requires creating a user interface. Appsmith offers a collection of more than 45 ready-to-use interface elements, including buttons, menus, charts and forms. For added measure, the startup has built a set of application templates that cover common use cases across areas such as supply chain management, customer support and marketing.

Software teams can customize Appsmith application components using the JavaScript programming language. JavaScript is relatively simple to use and ranks as one of the most widely used programming languages in the enterprise, which means that many developers are already familiar with its syntax. As a result, Appsmith’s platform is relatively simple to adopt for software teams.

As part of its feature development efforts, Appsmith has built a JavaScript code editor specifically geared toward building low-code applications. The tool includes standard features such as debugging capabilities and a code autocomplete engine. Software teams can integrate Appsmith with their CI/CD, or continuous integration and continuous delivery, software to manage the release of application updates.

Appsmith offers its platform under an open-source license. The platform has been downloaded more than 10 million times to date, the startup says, and is used by more than 10,000 organizations. Appsmith plans to generate revenue by providing support services and launching a commercial version of its software that will provide additional cybersecurity features not included in the open-source edition.

“This funding round was done to support the demand that we’re seeing for our open-source platform to build internal apps that are mission-critical and not customer-facing so they often get deprioritized,” said Appsmith co-founder and Chief Executive Officer Abhishek Nayak. “As a result, companies of all sizes from many different industries rely on Appsmith as an easy way to build custom apps to solve this problem.”