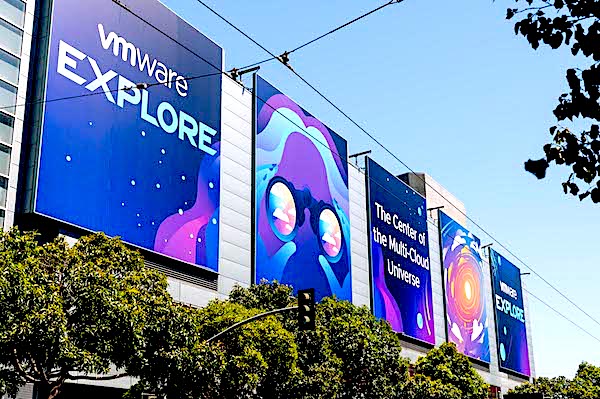 Historically, VMware Inc.‘s VMworld conference was one of the big three enterprise tech conferences, along with the RSA Conference and AWS re:Invent, that was large enough to transcend its primary sponsor, thus becoming one of the must-attend conferences of the year.

In contrast, this week VMware hosted the newly renamed VMware Explore conference – about one-third the size of the last pre-pandemic VMworld show. About 100 vendors exhibited, with most having a partnership or other salient tie to the host vendor. (* Disclosure below.)

Nobody, it seemed, had a good answer as to why the company would change the name of its flagship conference. And sloughing off the brand equity of the VMworld name wasn’t even the only head-scratcher from VMware at the conference.

Perhaps the most noticeable change in VMware’s marketing strategy was how the company downplayed its cloud-native story in favor of a multicloud strategy.

Instead of Tanzu taking point in VMware’s innovation strategy, however, multicloud moved into the company’s strategic vanguard, pushing cloud-native to the rear.

The result is that VMware is ceding its leadership in cloud-native to other vendors, instead placing its chips on multicloud – a concept that the VMware audience understands broadly but remains unclear on the specifics.

Since I last covered Caveonix Inc. at the fall 2018 VMworld, the company has transformed its offering from basic cloud security posture management to a full lifecycle platform offering visibility, security, compliance and governance for hybrid and multicloud environments – in particular, cloud-native ones.

The company shifts security and compliance “to the left,” evaluating cloud and Kubernetes configurations and mitigating their issues before deployment. The platform then automates governance, risk, and compliance activities throughout the lifecycle, supporting developers, DevOps personnel and the ops team.

The company also invented a “defense bot,” which automatically identifies and assesses misconfigurations upon virtual machine or container spin-up, sending alerts to DevOps and ops teams in as little as 30 seconds.

Clouds are adept at delivering virtually unlimited horizontal scalability but struggle with vertical scalability. Want more capacity in a particular cloud instance? Upgrade to a new instance and move everything over – a slow, often manual process.

Liqid Inc. solves this problem at the hardware level by attaching a special chassis to its private cloud servers. Each chassis can hold additional graphics processing units or other chipsets that operators can physically add to that server – or logically to any server in the cloud via a centralized control panel.

In other words, “assembling” a server is now as simple as dragging and dropping processors or memory onto its image on a dashboard dynamically, without having to move to new instance types or touch the hardware itself — as long as the appropriate gear is available in the data center.

Following the lead of its parent company, Zoho, ManageEngine built all these tools in-house, ensuring a common data model and seamless integration among the tools.

ManageEngine also takes advantage of a few of the apps from the Zoho suite, including advanced analytics and Zoho Creator, the company’s low code development tool.

However, given how well-integrated ManageEngine’s apps are, there are few situations where a customer would need to use Creator to customize an integration or add bespoke functionality.

Amazon S3 has become the de facto standard in cloud-based object storage, to the point that any vendor of an object storage solution will slap the “S3-compatible” label on its product.

That is, except for the other leading public clouds, which presumably don’t want to admit that AWS beat them to the object storage compatibility prize. MinIO Inc. solves this problem by offering high-performance, S3-compatible object storage that runs on Kubernetes in any public or private cloud, on premises, or on the edge.

MinIO’s product is entirely software-defined and open source. The public cloud vendors have even taken to recommending it to their customers who require S3-compatible object storage – including many popular database-as-a-service vendors that run their software on MinIO storage.

Morpheus provides a self-service interface for developers, DevOps professionals and ops personnel to handle and automate the provisioning, management and deprovisioning of the assets they are responsible for.

The company even simplifies the provisioning and deprovisioning of Kubernetes clusters, helping ops people gain the expertise they need to manage Kubernetes at scale – so the DevOps team doesn’t have to spend their time serving as the Kubernetes help desk for developers.

VMware’s recent strategic marketing decisions may be perplexing, but the buzz at the conference was that it really didn’t matter. For both VMware’s current customers as well as the exhibitors at the show, the company is certainly firing on all cylinders.

Most enterprises are indeed moving to multicloud deployments, so a multicloud strategy might end up paying off for VMware. The reality today, however, is that multicloud mostly means picking and choosing one service or another depending on the requirements at hand, for example, Google Cloud for TensorFlow, Azure to support Microsoft 365 and Amazon Web Services for everything else.

Can VMware transform this mix-and-match approach to multicloud transform into the strategic hybrid vision it’s betting on? Perhaps. Will downplaying cloud-native adversely impact the company’s ability to compete in this new world? Possibly, but I think not. Even as part of Broadcom Inc., VMware will have too much going for it.