A China-only car made by the SAIC Volkswagen joint venture, the new Audi A7 L is ostensibly a saloon version of the Audi A7 Sportback.

While it does retain some of the five-door A7’s sportiness, in many ways it’s a distinct model and was inspired by the Prologue concept car of 2014.

The largest Audi produced in China, it slots size-wise in between the locally produced long-wheelbase version of the Audi A6 and the imported Audi A8.

Our test car was an Edition One, from a run of 1000 to mark the launch of the car.

The A7 L is a well-proportioned saloon, and its good looks are enhanced on the Edition One by the exclusive 21in RS wheels and teal paint.

Inside, the dashboard and set-up are instantly recognisable to drivers of large Audi saloons.

A mid-mounted touchscreen with haptic feedback controls most functions and there’s a lower-mounted screen for climate control.

On the Edition One, the seats get heating only, doing without cooling or a massage function. They do, however, get Valcona leather in an exclusive coffee hue. Equipment omissions are surprising: there’s no wireless phone charging and the only USB ports available are Type C.

Due to the grey headlining, the rear seems rather dingy. Leg room is unsurprisingly good but, due to the sloping roofline, head room is at a premium. Anyone over 6ft tall is likely to have problems. 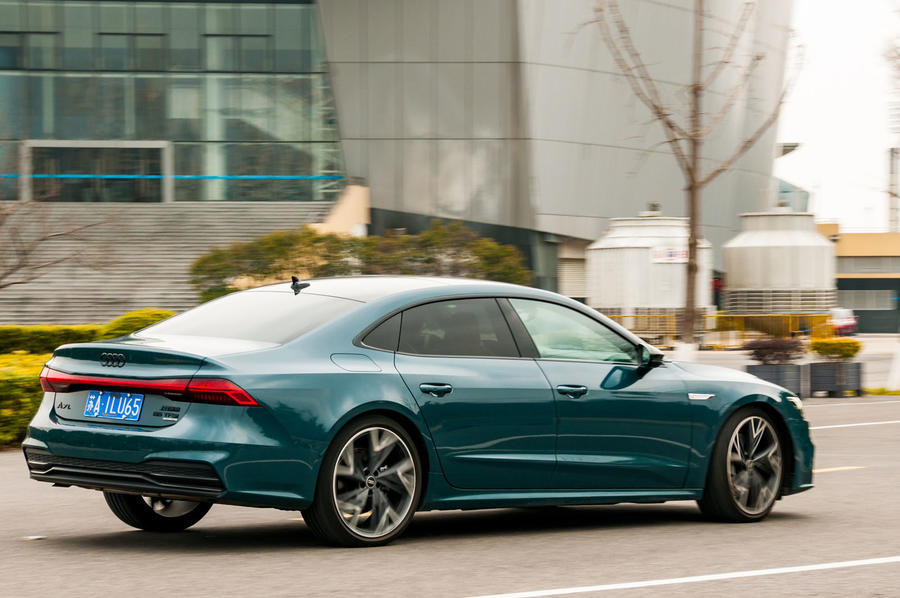 While the rear bench can accommodate three, the deep centre-tunnel eats into the middle passenger’s leg space.

The boot is cavernous, though, plus it contains an increasingly rare spare tyre.

The rear wheels steer by up to 5deg, which helps with the handling, although given the car’s 5076mm length, it can still be a handful in tight parking spots with alarms blaring in all directions.

The low seating stance suggests sporty handling, and while the A7 L does have a reasonable turn of speed, especially in Dynamic driving mode (aided further by paddle shifters), it’s no RS.

It’s more suited to being a cruiser, with air suspension giving it a generally cossetting ride.