When the Audi E-tron SUV arrived in 2018 as Audi’s first proper EV, it made headlines with its impressive 150kW peak charging rate, but even then the range was nothing to write home about. Four years later, its numbers are only about okay, so it’s a good thing that it’s facelift time.

Signalling the profundity of the updates is a new name: to bring the flagship in line with the smaller Audi Q4 E-tron and forthcoming Q6 E-tron, it’s now known as the Audi Q8 E-tron.

There are some visual tweaks, including new alloy wheel designs and redesigned bumpers and grilles, but the big news is to be found under the skin. Four years of advances in battery energy density have enabled Audi to increase the usable capacities of the battery packs from 71kWh to 89kWh (in the entry-level 50 variant) and from 89kWh to 106kWh (in the 55 and the sporty Audi SQ8 E-tron). Meanwhile, more advanced motors and a reduced drag coefficient have improved the energy efficiency.

Even so, 2.6mpkWh is still pretty poor, and on my test drive in very mild conditions the digital gauge cluster indicated just 2.2mpkWh – a figure that would translate to a real-world range of just 230 miles.

When it does need a top-up, the 55 can accept charging rates of up to 170kW – a useful increase but nowhere near the rival Genesis Electrified GV70’s 240kW limit.

To top off the upgrades, there’s faster steering, retuned suspension (as before, all variants ride on air springs) and cleverer stability control and traction control. 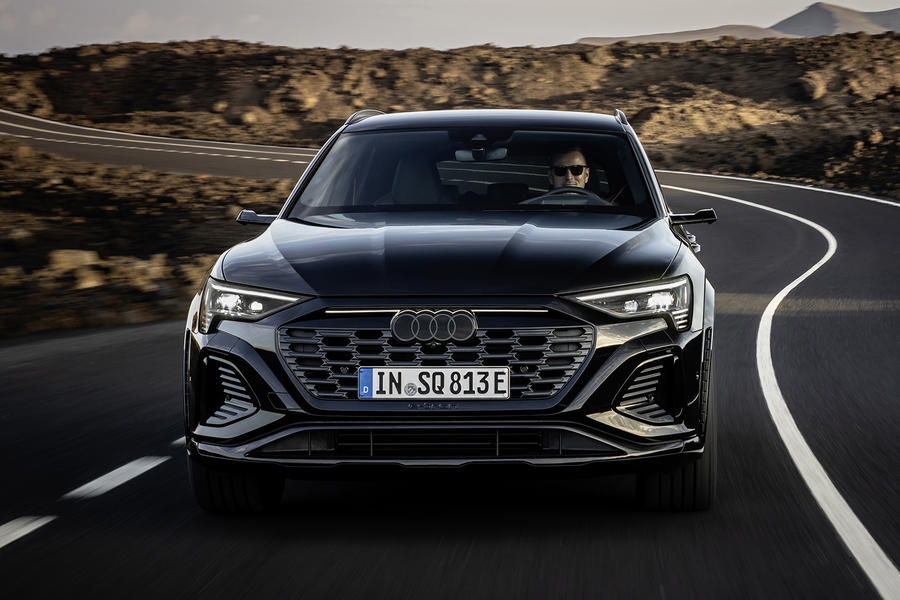 As before, the Q8 E-tron is an understatedly handsome and well-proportioned car, and in Sportback form it doesn’t suffer the ungainliness of some SUV-coupés.

Not much has changed inside either, solid build quality and upmarket materials remaining present and correct. The lower touchscreen (for the climate) still does a job that knobs and switches could do better, but it works quite well, as does the main infotainment touchscreen. The sports seats are easy to get comfortable in and there’s no shortage of storage space.

To drive, the Q8 E-tron is pleasant and mostly unremarkable. A 0-62mph time of 5.6sec is quick by any reasonable standard, yet it doesn’t suffer from the jumpy throttle response of Teslas and some other EVs. You can vary the amount of regenerative braking using paddles or simply let the car figure it out in the adaptive mode.

The Q8 E-tron retains impressive noise isolation, but even on the glass-smooth roads of Lanzarote, there was more fidget to the ride than you might expect from an air-suspended luxury car. At least it dispatches ruts and potholes fairly well, despite its large wheels.

Audi’s vehicle dynamics engineer told me it was a deliberate choice not to make an Audi float across the road like a Mercedes-Benz S-Class or a Range Rover. That’s fair enough in Germany, perhaps, but it might prove a bit too much on UK roads. The old E-tron struck a nice balance, so it would be a shame if we discover that it has been pushed too far in the direction of sportiness with this update.