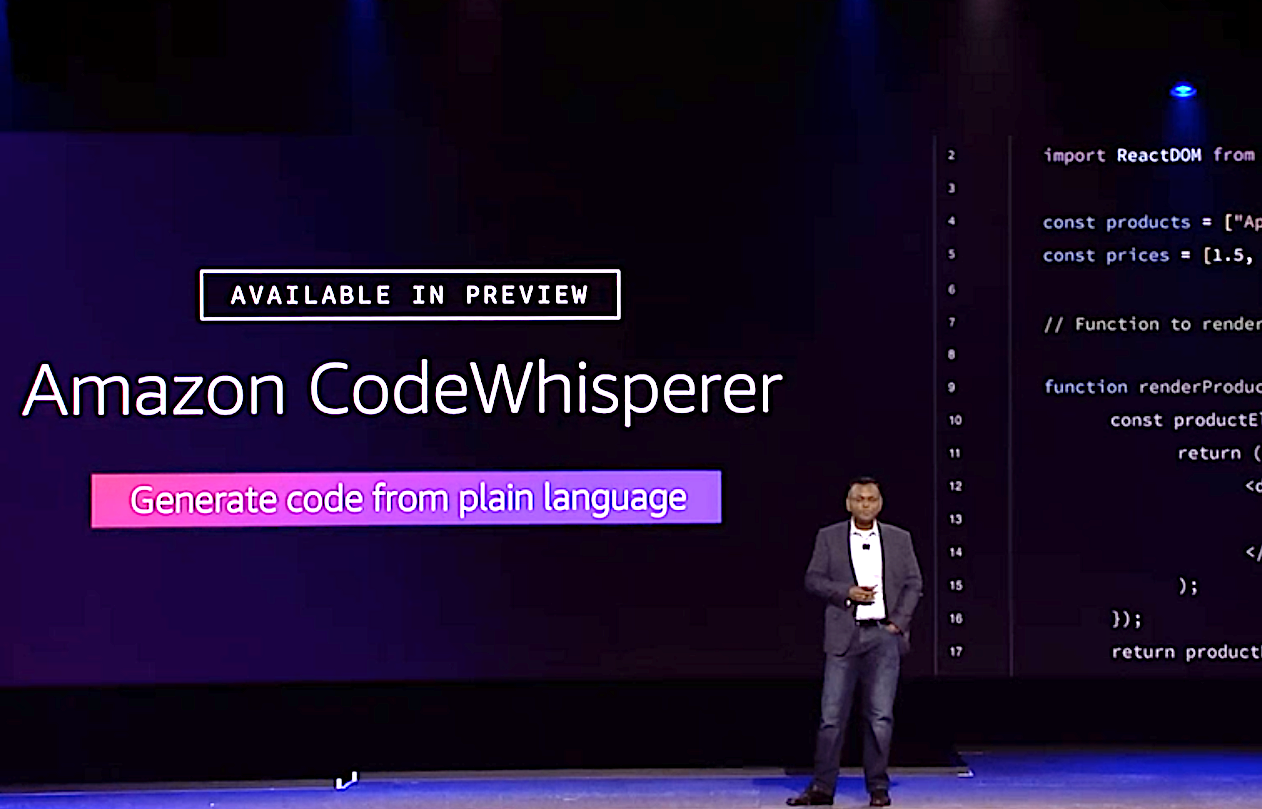 The capabilities made their debut today at Amazon re:MARS 2022 in Las Vegas.

The first addition to AWS’ cloud portfolio is a service called Amazon CodeWhisperer, currently in preview, that uses AI to generate software code automatically. According to AWS, the service can save time for developers by automatically producing code that otherwise would have to be written manually. The result is that software projects can be completed faster.

AWS says it has trained CodeWhisperer on billions of lines of code from open-source projects, internal code repositories and other sources. The service is capable of generating more than 10 lines of code at a time. Moreover, it can match the coding style used in a given software project, which simplifies certain development tasks.

“CodeWhisperer uses multiple contextual clues to drive recommendations including the cursor location in the source code, code that precedes the cursor, comments and code in other files in the same projects,” detailed AWS Chief Evangelist Jeff Barr.

Software teams can access Code Whisperer using a tool called the AWS IDE Toolkit. The tool is designed to integrate with a developer’s integrated development environment, or IDE, a type of desktop application that programmers use to write code and perform related tasks. CodeWhisperer supports several popular IDEs as well as multiple programming languages, including Java, JavaScript and Python.

CodeWhisperer can generate code snippets based on natural language text that a developer adds to a source file. If a developer enters an instruction such as “check if a number is a prime number,” the service is capable of generating a code snippet that will perform the specified task. If completing a task requires drawing on external technologies such as a cloud service or a library, CodeWhisperer can automatically find the necessary technologies and incorporate them into the code.

Another focus of the service is making it easier for developers to use AWS’ cloud platform. CodeWhisperer simplifies tasks such as creating buckets, or data storage repositories, in AWS’ popular Amazon S3 storage service. It also works with other popular services such as Amazon EC2 and AWS Lambda.

CodeWhisperer made its debut at re:MARS 2022 today alongside an update to an existing AWS service called SageMaker Ground Truth. The service helps software teams create training datasets for their AI projects. As part of the update, SageMaker Ground Truth is receiving synthetic data generation capabilities.

Building an AI application involves numerous steps. One of the most time-consuming steps is the process of preparing a training dataset, which can take months because the data often has to be created manually. For example, if a company is building a neural network to detect faulty components on a production line, it would have to create a custom training dataset with images of faulty components.

“Once all data is collected, you need to accurately label the images, which is often a struggle in itself,” Antje Barth, AWS’ principal developer advocate for AI and machine learning, explained in a blog post today. “Manually labeling images is slow and open to human error, and building custom labeling tools and setting up scaled labeling operations can be time-consuming and expensive.”

“AWS digital artists will start by creating a small test batch of labeled synthetic images as a pilot production for you to review,” Barth detailed. “Once the objects are prepared, they are rendered using a photorealistic physics engine, capturing an image of the scene from a sensor that is placed in the virtual world. Images are also automatically labeled.”

Today’s updates were preceded by AWS’ introduction of Amazon EC2 Trn1 instances at its re:Invent conference last November. The instances, which are currently in  preview, are specifically optimized for AI training. The Trn1 series, based on an internally developed chip dubbed AWS Trainium, enables customers to provision up to 16 such chips per each instance they deploy.