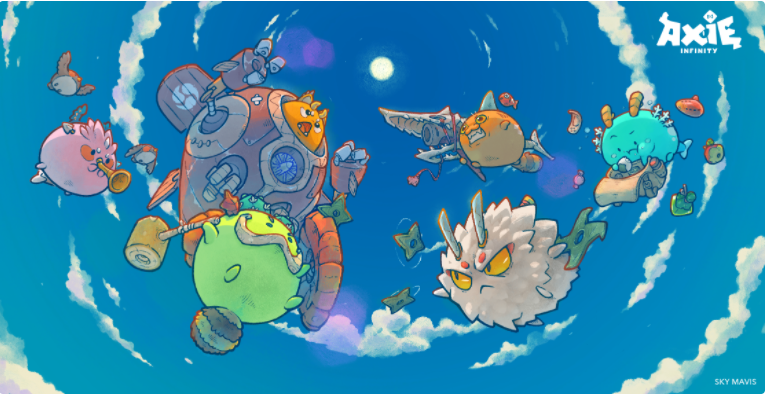 Sky Mavis, the creator of the popular “Axie Infinity” blockchain game, has teamed up with Google Cloud to become a validator for its blockchain gaming and nonfungible token network to scale it up securely and sustainably.

Sky Mavis announced a multiyear collaboration with Google Cloud today during AxieCon, the company’s gaming and fan conference, that the company has tapped the technology giant to become a validator node on Ronin, its gaming transaction network. That means Google Cloud will help secure transactions on the “sidechain” that supports its gaming platforms.

“Axie Infinity” is a play-to-earn blockchain game where players collect and trade digital pets inspired by the salamanders known as axolotls called Axies in the game. These creatures can be bred and battled against one another within the game for rewards and are represented by NFTs, which are blockchain-based crypto assets that retain value so players can exchange them for money.

The Ronin network was launched in 2021 using the Ethereum virtual machine designed to allow the thousands of transactions necessary to support gaming at scale with low latency and low transaction fees, thereby allowing millions of in-game microtransactions.

Google Cloud will be joining a validator node pool that includes Animoca Brands, DappRadar, Nansen and others. Validators oversee the security of the network by providing collective security and governance over transactions by monitoring the validity of transactions and assuring that the entire pool is operating correctly.

“Validators have the important duty of ensuring that transactions on Ronin are processed correctly,” said Aleksander Larsen, co-founder and chief operating officer of Sky Mavis. “They also serve as crucial ecosystem partners and supervisors. Google Cloud, which sits at the intersection of being a recognized contributor to the developer community and having deep technical expertise in blockchain infrastructure and running validators, was naturally one of the top choices.”

In March, the Ronin Network became the victim of a hack that stole $615 million stemming from a compromise of the Ronin validator nodes. During the hack, an attacker forged authenticator keys and used them to forge withdrawal codes to steal cryptocurrency from the network.

The addition of Google Cloud to the validators is intended to strengthen the Ronin Network’s validator pool and make it more difficult to compromise. Larsen added that Google Cloud has been a strategic cloud provider since 2020 and has now become the 18th validator for Ronin, on a path toward having 21 independent validators.

In spite of security incidents and a market downturn that has been dubbed “crypto winter” that has caused crypto markets to plummet over 70% from all-time highs last year, blockchain gaming has seen remarkable highs in 2022. According to DappRadar’s blockchain games report in September, GameFi represented more than 50% of the industry’s usage.

“Axie Infinity” surpassed $4 billion in all-time NFT sales and attracted more than 36,000 daily players on average during the quarter. The previous quarter’s report noted that blockchain gaming activity had exploded over 2,000% from the previous year.

Sky Mavis also intends to build its core infrastructure, including Ronin and Mavis Hub – a launchpad for new blockchain games – on Google Cloud’s cloud delivery network. The company hopes to establish the Ronin Network as the default NFT scaling solution for blockchain gaming. By taking advantage of Google Cloud’s advanced load balancing features, the platform will be able to deliver smoother experiences for users on any device, even those who live in rural areas with limited online connectivity.

The company believes that Google Cloud will enable it to provide developers with scalable distribution of community-built games and other experiences built on Sky Mavis’ technologies and partnerships with major game studios.

“From our time in the Google for Startups Cloud Program to where we are today, Google Cloud and its partner Searce have provided us with the right support at every stage of our growth journey – whether it’s handling fluctuating traffic so that 2.3 million Axie NFT owners enjoy equitable platform experiences or introducing new mechanisms to drive sustainability across our digital nation,” said Trung Nguyen, co-founder and chief executive officer of Sky Mavis.