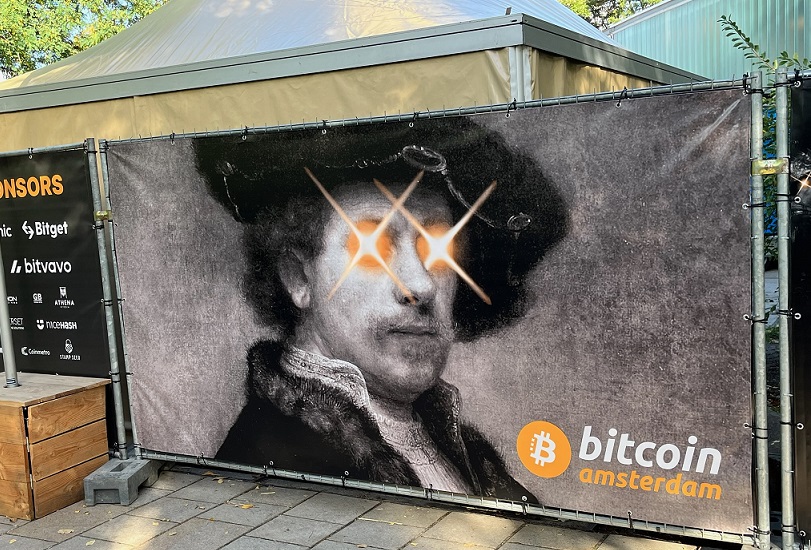 The cryptocurrency community is on a collision course with government regulators and the centralized banking system, and the outcome could have big repercussions for a digital currency model based on decentralized finance and peer-to-peer transactions around the globe.

The coming collision was very much on the minds of attendees at Bitcoin Amsterdam this week, billed by event host Bitcoin Magazine as the “biggest Bitcoin conference in Europe.” The Netherlands setting offered a bit of irony. The Bank of Amsterdam was established in 1609 as the world’s first true central bank, and the Sibos central banking conference was taking place at the same time in a different venue across town.

“Are they talking about which nation state they want to cancel from the financial system?” BTC Inc. Chief Executive David Bailey asked in opening session remarks. “I can promise you that’s not what we’re talking about here. As we say in bitcoin: Fix the money and fix the world.”

The problem confronting Bailey, and the rest of the bitcoin community, is that the very powers chartered to manage the centralized banking model are looking to both compete with and rein in the largely unregulated cryptocurrency space. The current battleground involves two four-letter acronyms: CBDC and FATF.

CBDC or central bank digital currency is a digital form of a country’s fiat money. According to the International Monetary Fund, China and India, the most populous countries in the world, are farthest along in launching CBDC. European finance leaders recently confirmed plans for a digital euro in 2023, and a key policy adviser in the White House indicated that the U.S. is “closely examining” options for issuing a dollar-based CBDC.

“Bitcoin is something serious all around the world and central banks are grappling with that,” said Frank Holmes, executive chairman of Hive Blockchain Technologies, during a panel session at the event. “They are going to copy. It’s just a matter of time.”

While major countries move to digitize existing fiat money, the cryptocurrency community has expressed concern over the implications of such a move. In September, the Bitcoin Policy Institute released a report citing China’s use of the CBDC as a cautionary tale for the U.S. to consider in its own plans.

Chinese authorities have indicated that CBDC should not be as anonymous as cash, raising privacy concerns among advocates for other digital currencies that the move to CBDCs will result in government tracking of personal spending habits. Jerome Powell, chairman of the U.S. Federal Reserve, has said that if the U.S. were to issue a CBDC, it would also not be anonymous.

“CBDCs stand for control,” Allen Farrington, an independent journalist who covers bitcoin, said during a panel session at the conference. “I’d rather stand for freedom.”

The battle over keeping digital currency anonymized and free of state control has spilled into the regulatory realm within the European Union. Concerns over global money laundering, as far back as 1989, led G-7 nations to form the Financial Action Task Force or FATF. The group has since emerged as a significant concern in the cryptocurrency world over digital currency regulation.

Earlier this week the European Parliament moved forward with a plan to regulate digital currencies according to the same provisions as traditional finance by making all digital transactions traceable in keeping with the FATF charter. The move raised additional concern around privacy for future digital transactions throughout much of Europe and exposed vulnerabilities within the crypto community over how it is handling the regulatory threat.

“As far as I’m concerned, this FATF panel can go [blank] themselves,” said Matt Odell, co-founder and executive editor of CoinPrices.io. “I have zero faith in finance regulators pulling back on surveillance.”

Kevin Murcko is the founder and CEO of the crypto exchange Coinmetro, and he has been advising regulators and government agencies on how to apply governance to new financial markets. Murcko’s position, as recently outlined in a blog post on his company’s website, is that decentralized finance should be regulated in the interest of controlling fraud and making DeFi more accessible to a wider audience.

However, Murcko expressed concern this week that the double freight trains of CBDC and FATF could potentially steamroll a nascent industry unless the crypto community can present a stronger argument in its defense.

“We have all the tools we need to get rid of cumbersome regulation, but they don’t understand the technology,” said Murcko. “We need to control the narrative. We have a terrible narrative right now.”

That narrative, based on technological change and challenges to entrenched institutions, has nevertheless found appeal in other areas of societal transformation. One of the keynote speakers at Bitcoin Amsterdam was Stella Assange, wife of Julian Assange, who founded WikiLeaks, publisher of classified information provided by anonymous sources.

When WikiLeaks posted nearly a half-million classified documents related to U.S. wars in Iraq and Afghanistan in 2010, the PayPal account used by the nonprofit for donations was closed. One year later, payment companies representing over 97% of the global market had shut off the WikiLeaks funding taps. That forced the website to turn to the bitcoin community, and over a 10-year period WikiLeaks received $37 million in bitcoin donations.

“The PayPal closure just shut off WikiLeaks from 99% of the revenue, and it led to WikiLeaks becoming one of the early adopters of bitcoin,” Assange said. “Bitcoin and its technology are trying to fight censorship in the same way as Julian. There is a lesson to be learned there about anyone who challenges the hegemonic order.”