Bitcoin miners have been forced to tap into their cryptocurrency stashes as a plunge in prices, rising energy costs and increased competition bite into profitability.

The number of coins miners are sending to crypto exchanges has been steadily climbing since June 7, researchers at MacroHive noted, in a sign that “miners have been increasingly liquidating their coins on exchanges.”

Several publicly listed bitcoin miners collectively sold more than 100% of their entire output in May as the value of bitcoin tumbled 45%, an analysis by Arcane Research https://tmsnrt.rs/3nhYdHA found.

“The plummeting profitability of mining forced these miners to increase their selling rate to more than 100% of their output in May. The conditions have worsened in June, meaning they are likely selling even more,” said Arcane analyst Jaran Mellerud. 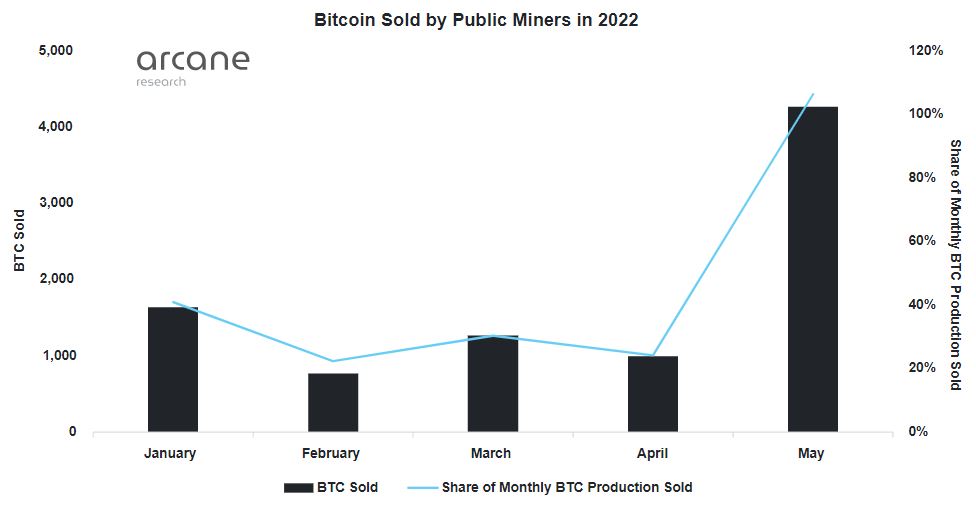 Bitcoin miners, who run networks of computers to earn tokens by validating transactions on the blockchain, are typically staunch crypto “HODLers” and collectively own around 800,000 bitcoins, according to CoinMetrics data.

The crypto mining space rapidly expanded in 2021 as bitcoin more than quadrupled in value, but this growth has further pressured margins as the process is designed to grow more difficult as the number of miners increases.

“Over the past six months, hash rate and mining difficulty have increased while the price of bitcoin has dropped. These are both negatives for existing miners as both work to compress margins,” said Joe Burnett, analyst at bitcoin mining firm Blockware Solutions.

High energy prices are also hitting miners, which by some estimates use more electricity than the Philippines, according to the Cambridge Bitcoin Electricity Consumption Index.

“If you’re not at a very low-cost electricity area at this point, you’ve got to shut down,” noted Chris Brendler, senior research analyst at D.A. Davidson.

Shares of publicly listed miners have been battered even more than bitcoin, with the Valkyrie Bitcoin Miners ETF falling 59% this quarter compared to 53% drop for bitcoin.

Some miners, including Bitfarms, are using proceeds to negotiate financing agreements to fund operations and make payments on expensive mining equipment.

If miners have already paid two-thirds or even 70% of the price of these millions of dollars in machines, they wouldn’t want to miss the final installments, which makes them desperate for financing, Brendler said.

Given their significant bitcoin holdings https://tmsnrt.rs/3xUJesg, some analysts point to miner sales as another factor weighing on bitcoin prices. 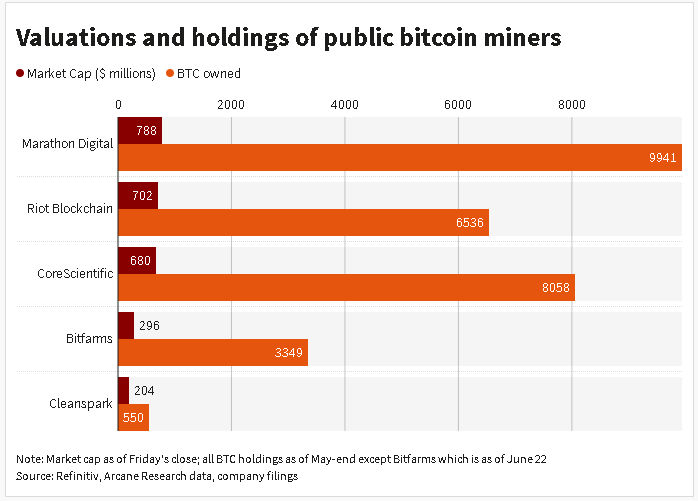 LIGHT AT THE END OF THE TUNNEL?

Miners using older and more energy-intensive machines, and without the balance sheet and access to financing of publicly listed players are already struggling.

Bitcoin’s mining difficulty decreased 2.35% this week, Glassnode data showed, indicating the network had adjusted after some miners turned off their rigs.

This takes some pressure off those that have not given up.

“Bitcoin mining is a zero-sum game. If you can continue running when others cannot that means you have a larger share of the pie,” said Charlie Schumacher, spokesperson for the largest publicly listed miner Marathon Digital Holdings Inc.

Marathon has not sold bitcoin since October 2020, he added.

(Reporting by Medha Singh and Lisa Mattackal in Bengaluru; Editing by Lisa Shumaker)