RARELY does a sport like boxing either reward patience or save the best for last. However, it’s fair to say that any decision made regarding “Fight of the Year” this year might want to wait until super-flyweights Joshua Franco and Kazuto Ioka have finished their business on New Year’s Eve.

Those two, arguably two of the most exciting fighters on the planet, collide on December 31 at the Ota-City General Gymnasium in Tokyo, Japan, and carnage seems the only option. Regardless of who eventually wins the fight, the easiest thing to predict right now, before it has happened, is that the action produced will be unmissable and the fight will, despite it coming so late in the year, muscle its way onto most year-end lists when it comes to the 2022 “Fight of the Year”.

This belief stems from a few things. Firstly, with both fighters in possession of a belt (Franco has the WBA; Ioka has the WBO) there is plenty at stake and, moreover, both have been waiting for a fight of this magnitude for some time. Secondly, on account of their styles and history of entertaining scraps, it is hard to picture Franco and Ioka meeting in the ring and delivering anything other than a fight full of momentum shifts, ferocious exchanges, and drama. In other words: fireworks.

For Ioka, in particular, this fight has been a long time coming. A belt-holder since 2019, which was the year he stopped Aston Palicte in 10 rounds to win his current title, Ioka, 29-2 (15), has so far made five successful defences, all of which have taken place at the same venue in which he will fight Franco. He defeated the unbeaten Jeyvier Cintron in his first defence, then followed this with wins against Kosei Tanaka, also unbeaten, Francisco Rodriguez Jr and Ryoji Fukunaga. In July, meanwhile, he dominated veteran Filipino Donnie Nietes over 12 rounds, exacting revenge in the process. 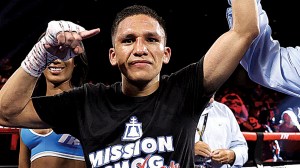 Franco, on the other hand, six years Ioka’s junior at 27, has been a belt-holder since 2020. That was the year he twice fought the Australian Andrew Moloney; outpointing him the first time before their rematch ended in an unsatisfying “No Contest” due to Franco’s eye being damaged in the second round. The pair then fought a third time the following year, with Franco this time putting any uncertainty to bed by comfortably winning a unanimous decision in another entertaining scrap.

Now, having left Moloney behind, Franco, 18-1-2 (8), prepares to face a new name and a fellow belt-holder. His only loss to date as a pro came all the way back in 2018, when stopped inside nine rounds by Lucas Fernandez, but, much like his younger brother Jesse Rodriguez, the Texan is a maturing fighter who has only improved with age.

Ioka, too, seems to have now hit a purple patch in his thirties. No stranger to setbacks himself, the Tokyo native lost his first title shot at super-flyweight, when falling short via split decision against Donnie Nietes in 2018, and four years prior to that had lost an IBF title fight against Amnat Ruenroeng, again by split decision. He is, therefore, both accustomed to disappointment and accustomed to coming back stronger from this disappointment to improve both his skills and his fortunes. He did that as a flyweight, a division in which he won and defended the WBA belt five times, and also, more recently, as a super-flyweight.

A world champion now in four weight classes (including minimumweight and light-flyweight), Ioka is certainly the one with experience on his side going into this December 31 clash with Franco. He will, in addition to this, have the bonus of fighting in front of a home crowd – albeit a crowd famously quiet and respectful – in a venue that has become something of a happy hunting ground for him of late.

This, given how well-matched the pair appear to be, could be the thing that ultimately makes the difference on the night. The fight will surely be close, just as the action will surely be frenetic, and in the end any edge – be it in experience or support – could prove vital to the outcome. It’s for that reason I pick Ioka to prevail on points in a fight close and thrilling enough to have those who watch it on New Year’s Eve not only rethinking their “Fight of the Year” pick but calling for a rematch in 2023.

Elsewhere on the Tokyo card, Japan’s Hayato Tsutsumi, a 23-year-old featherweight prospect who won his pro debut over eight rounds in July, steps up again versus Filipino Pete Apolinar, 16-3 (10), in a bout also scheduled for eight. At super-featherweight, meanwhile, there is an all-Tokyo eight-rounder between southpaw Ryo Nakai, 5-1-1 (2), and the unbeaten Kai Watanabe, 8-0-1 (4), who is still only 20 years of age.