IN recent times, and at a certain level, UK-based Russian David Avanesyan has become something of a feared destroyer of the 147-pound welterweight division. He has, for the past 18 months, cut a swathe through the weight class on this side of the Atlantic, stopping the likes of Josh Kelly (TKO 6), Liam Taylor (TKO 2) and Oskari Metz (TKO 1), and emerging, because of this, as a fighter to avoid at all costs.

And yet, as shown tonight (December 10) in Omaha, if you give a feared and avoided destroyer to a man like Terence Crawford, arguably the best welterweight on the planet, he will likely deal with them in ways all the others were unable to. He will, in other words, make a lamb of a wolf. He will make it look easy.

Indeed, not for the first time in his career Crawford, in stopping David Avanesyan in six rounds, took on a man many would prefer not to fight and proceeded to do a job on him so clinical it makes you wonder if we were wrong about the bogeyman all along.

Certainly, in the case of Avanesyan, there is an argument to be had that much of his fearsome reputation was limited solely to the UK, where he has had most of his success. There, in the UK, he is known as the best of the bunch; someone adept at snapping unbeaten records and crushing dreams. Outside that territory, however, he is considerably less known, and perhaps only known for beating a faded version of “Sugar” Shane Mosley back in 2016 (which was followed by two stateside losses against Lamont Peterson and Egidijus Kavaliauskas).

Which is why, in the end, for as good as Crawford looked in defeating Avanesyan, he remains on a hiding to nothing when taking and winning these kinds of fights. He can, at 35, beat men like Avanesyan every day of the week and presumably could until he reaches 40, yet a win over David Avanesyan does little to enhance Crawford’s legacy, nor does it add credence to any claim that he can be considered the number one at welterweight without fighting his rival Errol Spence Jnr.

Regardless, tonight in Omaha Crawford did everything he needed to do – and was expected to do – against an opponent full of both aggression and momentum. With, as always, the specter of Spence looming, he concentrated on the immediate and impressively busted Avanesyan up before dispatching him cruelly in the sixth round. 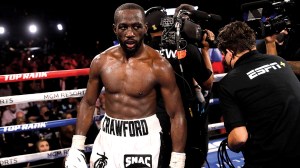 At first boxing orthodox, Crawford, a switch-hitter, copped a hard overhand right from Avanesyan a minute and a half into round one, which served to excite Avanesyan and, as it turned out, also sharpen Crawford’s focus. It was then, once settled, and once turning southpaw, Crawford soon found his range and began spearing his opponent with left uppercuts as he came forward.

In the second round, Avanesyan, undeterred, continued to chase after Crawford and show a willingness to engage. He landed a left hook to the head and left hook to the body two minutes into the round, which again grabbed Crawford’s attention, yet there remained, despite these moments of success, a feeling that Crawford, so patient and composed, was for the most part measuring and toying with his challenger.

In truth, Avanesyan was fighting no differently than he has – to great success – of late. He was full of energy, full of spite and full of bad intentions. However, the difference this time was that, in Crawford, he had an opponent who was not only comfortable with him fighting in this manner but also someone who possesses the tools and mentality to eventually use this aggression against him. Crawford, make no mistake, is in a different league to men like Liam Taylor and Josh Kelly, just as he is in a different league to almost every other boxer on the planet.

By the fourth, as if to prove this, he was timing Avanesyan with a clever right hook, over and over again. It was with this punch, in fact, unbeknown to both Avanesyan and those watching in the arena, Crawford would conclude matters a couple of rounds later. He had, after all his plotting and measuring, found a home for it in between Avanesyan’s combinations and the more ambitious Avanesyan grew, and the more desperate Avanesyan became, the easier it then was for Crawford to land this shot and increase its degree of impact.

To Crawford’s delight, Avanesyan, 29-4-1 (17), never gave up. Instead, as is his custom, he kept chugging forward, forcing out lefts and rights, and gave it his all in the fifth, a round in which they stood toe-to-toe and both tried to gain the upper hand. It was Crawford’s superior variety, though, that often kept him one step ahead of his opponent in moments such as that. For whereas Avanesyan could push out only straight lefts and rights, with the occasional looping shot thrown in for good measure, Crawford was able to see, prepare and land pretty much every shot in the book.

The crucial one, of course, was the right hook. That, as well as the left uppercut (which Crawford used with increasing regularity throughout the bout), was the shot that ultimately sucked the energy from Avanesyan and, midway through the sixth round, ended his challenge, leaving him flat on his back following an exchange. It was a punch he had not seen coming, due to the fact he had been blinded by the Crawford left cross thrown before it. Nor, one suspects, did he know much about it having landed once rising from his feet with the fight finished.