IT WAS the last fight, the last great night of glory for Chris Eubank and he left the sport with dignity.

In the vicious aftermath of last Saturday’s fight, when escalating dreams crashed so suddenly, it was a reminder of another loss in the Eubank family. It was 1998, Sheffield was the venue and Eubank, the dad, was fighting a rematch with Carl Thompson for the WBO’s cruiserweight title.

They had fought to a bloody standstill just 91 days earlier. The rematch was always going to be brutal on both. Eubank had lost the first fight by just one point on two cards and three on the other. He had finished with his damaged left eye closed and ugly. Thompson, in his first defence, had survived a knockdown. They had each, somehow, survived each other. Eubank went to hospital for two days and nights to recover and check on lasting damage. We had all been witness to something quite brilliant and terrifying.

The rematch was a relentless battle of attrition, one of the great fights of the Nineties. Frank Warren, the promoter, said that the first fight was a “contender for fight of the decade.” He was right, both were.

The rematch started where the first fight had ended. Every second of every completed round was furious and hard. The left eye was showing signs of swelling and congealed blood early. To this day, in the right light, the dark, hidden secrets of that damage are still visible on Eubank’s face. Eubank knew, going into the second fight, that defeat would be the end. His body was starting to shut down and in the first fight, he had not leapt over the ropes because his knees were sore.

The left eye was closed by the end of the ninth. Eubank insisted that he could still see out of it – that was not true. He begged his corner to cut it, to slice it open and release the blood. He pleaded for the small and illegal act. At the end of the ninth round, as he sat down, the doctor arrived. There was no mercy in that holy, blood-stained ring.

The scores at the end of the ninth had Eubank winning; two judges had him three rounds up, the third had it a draw. “All I had to do was survive and the fight was mine,” Eubank kept saying. “It was just three rounds.” Well, just three rounds with only one eye.

The doctor did the right thing, the humane thing and broke Eubank’s heart by pulling him out. Thompson was the winner. It was the only stoppage loss of Eubank’s 14-year boxing career. Eubank was not happy in the ring; he thought that he had done enough in the first fight, and he believed that he could continue fighting when the rematch was stopped. That is, by the way, not delusion, it’s just belief and desire. 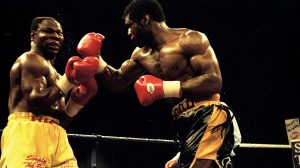 In the dressing room, I squeezed into a chair next to Eubank. He was looking up at the lights, his left eye still hidden under the swelling. He was exhausted from the fight and his life in the ring. He talked about making a decision about his career that September, but he probably knew that night it was all over.

There was no moaning. He was a big boy and later said of defeat: “You must never be a bad loser, take your beating and subsequent defeat with dignity.” It is worthy of being printed and stuck above the door of every gym in the land. It seems his son has followed the advice.

In that dressing room there was one act that has forever been clear in my mind. As Eubank was talking, he was taking his boots off. It was a long and painful process. Every time that he leaned forward to pull a lace, a spot or two of blood dripped from his nose or mouth or lip. The spots landed between his feet and each time he would look at them and then wipe the floor clean. He would then sit up, talk and then return to the boots. There would be more spots, he would wipe the floor clean once again. This happened several times and Eubank seemed bemused by the constant appearance of the red spots on the floor. He just kept wiping them away, cleaning up the mess. He was off in a distant land during that dressing room visit, a land where magic blood appears between your feet every time that you bend over.

Many years later, Eubank wondered one day about the nature of loss and defeat in the ring. He lost five times and every round in defeat was savage. Every round, that is not an exaggeration. “I asked myself, after defeats,” said Eubank. “How did I lose? Did I lose like a man with dignity? Yes, I did.” He most certainly did, even in fights where there was a lot of bad blood and bitter rivalry. He was always honest when he got back to the dressing room. Perhaps that, when last Saturday is fully digested, might just be the lasting memory from the sudden end. Eubank, the son, like Eubank, the dad, took defeat heroically. Remember, Eubank chased rematches in the same year with both Thompson and Steve Collins.

On that night in Sheffield, he eventually cleared the blood, got rid of his boots and took a shower. It was the end.

Eubank was just 31 that damaging night in Sheffield, it was his 52nd and final fight. We still miss him. Thanks for all the memories and the guts and heart and controversies. And all the blood he gave us during his career.