Customers began reporting lost connectivity as early as 4 AM Eastern time, according to the Wall Street Journal. At 3:20 PM, the company posted an update saying the outage affected both his wireline and wireless networks and that it was continuing to work to restore services and was making progress but that not all services were back online at that point. No further updates had been posted as of 4:30 PM. The Toronto Star said an online service tracker (pictured) showed outages in the greater Toronto, Ottawa, Montreal and southern British Columbia Regions. 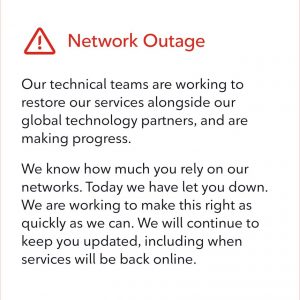 “We know how much you rely on our networks,” Rogers said in a message posted on its homepage. “Today we have let you down. We are working to make this right as quickly as we can.”

Internet tracking firm NetBlocks Ltd. said national connectivity was down about 25% from normal levels on Friday and that the outage impacted not only Rogers but several internet service providers.

Rogers is the largest telecommunications provider in Canada with 11.3 million wireless subscribers and $8.8 billion in 2021 revenue. Its cable service covers 4.7 million homes. The company also owns the Toronto Blue Jays and the Rogers Centre event venue.

The Ontario Lottery and Gaming Corporation said the outage had hit its lottery terminals and some oncology patients of Niagara Health System were forced to reschedule Friday appointments. Scarborough Health Network asked physicians and staff on call to physically come to the hospital until the disruption was resolved.

Customers posted numerous complaints to Twitter, but some took the opportunity to make light of the situation. Twitter account @RogersOutage quickly appeared with a single follower while one user echoed a troubleshooting suggestion that’s familiar to cable internet customers: “Can someone at Rogers please pull the plug… wait 30 seconds…and plug it back in??!!”