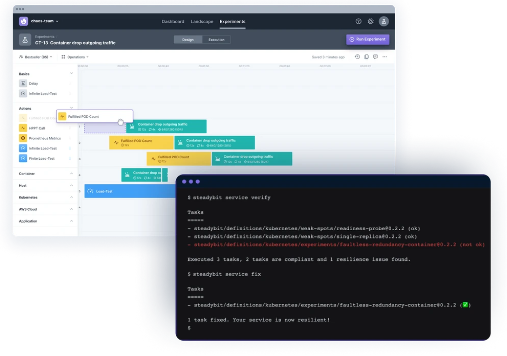 Including the new funding, Steadybit has raised $9.3 million to date, according to data from Crunchbase. Previous investors include Angular Ventures and New Forge.

Founded in 2019, Steadybit offers a “chaos engineering” platform designed to proactively reduce downtime and provide visibility into systems to detect issues. Chaos engineering is the process of testing a distributed computing system to ensure that it can withstand unexpected disruptions, relying on concepts underlying chaos theory that focus on random and unpredictable behavior.

Steadybit’s application of chaos engineering involves injecting disruptions into software environments. By observing and understanding the emergent behavior of complex systems under those conditions, the company’s platform helps engineers identify resilience gaps and fix them before they turn into production incidents.

The company claims its solution fundamentally shifts the culture and approach to chaos engineering by managing the unpredictable nature of multicloud environments, multiregion application architecture and the numerous microservices running inside containers and Kubernetes, the software that manages containers. Steadybit’s platform can define applications’ steady-states by integrating existing load tests and monitoring tools, inject failure modes such as network latency, and check for resilience best practices and policies.

The platform’s key features include an intuitive and extensible experiment editor that, according to the company, makes it easy to model past incidents, hypotheses about a system, or architecture requirements precisely without any prior programming experience. A robust blast radius within the platform allows controls on a team and environment level that enable safe chaos engineering rollouts at any scale and level of expertise.

Steadybit also offers a comprehensive application programming interface that its says will allow deep product integration into existing workflows and rigorous automation to reduce the administrative effort of large-scale roll-outs.

“Resilience is a team sport and because resilience is a shared responsibility, we developed Steadybit as the chaos engineering platform that is equally beneficial to site reliability engineers, DevOps and developers,” co-founder and Chief Executive Benjamin Wilms said in a statement.