Charli and mom Heidi also open up about “Dancing with the Stars,” while dad Marc shares how he and Heidi help their daughters navigate fame.

The D’Amelios — aka TikTok’s “First Family” — put the “real” in reality show with their Hulu series, “The D’Amelio Show,” and now they are back for another season, once again showing the world both the good — and the bad — of their lives.

Season 2 — which consists of 10 half-hour episodes — follows TikTok stars Charli and Dixie D’Amelio, and their parents Heidi and Marc D’Amelio, as they navigate their lives in the public eye, deal with negativity online and pursue new business ventures. At the same time, Charli and Dixie find themselves facing problems all young people have, such as learning to become independent, being compared to one’s sister, and, of course, experiencing love and heartbreak as Dixie’s on-again-off-again relationship with Noah Beck and Charli’s romance with Landon Barker are both explored in the season. 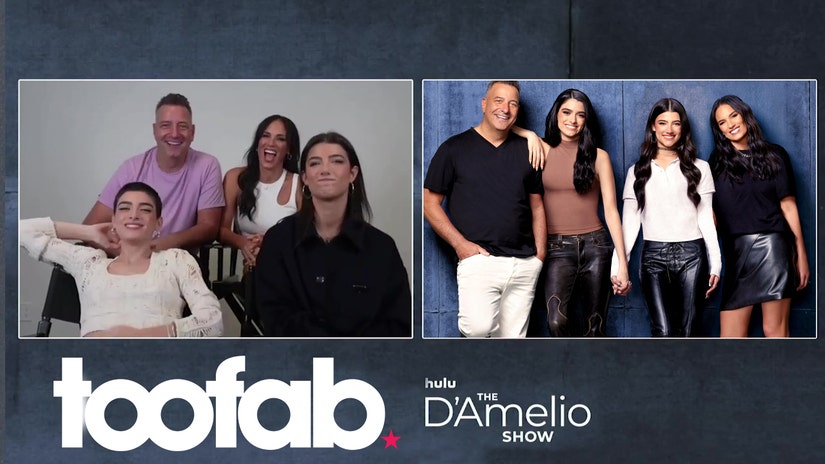 In an interview with TooFab, the D’Amelios opened up about what fans can expect from Season 2, and what it’s like sharing their lives on the reality show versus on social media.

Charli, 18, and Dixie, 21, — who are the second and 11th most-followed creators on TikTok, respectively — also spoke about how they handle trolls online, while Marc, 53, shared how he and Heidi, 50, help their daughters navigate fame.

Meanwhile, Charli and Heidi also discussed their experience competing on “Dancing with the Stars.”

See more in the video, above, and the full Q&A, below!

What can fans expect from Season 2? How would you describe it in one word?

Marc: It’s always the second question that trips you up from the first one.

Charli: What you can expect from this season is, you know, a lot more fun. You get to see us travel, you get to see us come into our own and become more comfortable in this new space that we’re in. Well, I guess it’s so new now. But I think my one word to describe Season 2 is growth, ’cause you get to see a lot of growth from me personally as a person.

Dixie: Confidence. I think we all got very confident this season.

Marc: I like Charlie’s word — comfortable. I think — even though that wasn’t your word, but you said earlier — I think we are more comfortable this season.

Heidi: I was gonna say comfortable.

Charli and Heidi, I know you guys are only a few weeks in, but how are you both enjoying “Dancing with the Stars” so far?

Charli: I love it. I’m having the time of my life.

Heidi: Same. I’m having a blast.

Charli: It’s so much fun.

Are you guys tired? Are you exhausted? Or are you just along for the ride?

Heidi: It’s a lot and we’re tired, but that’s all that we wanna do.

Charli: It’s worth it.

Dixie: I try to just not look at it ’cause it really affects me.

Charli: I like to keep myself busy so I don’t have a chance to do a deep dive into the negativity. I’d rather just not know.

Marc: I think we’ve come to realize that this is one of those things that parents can’t help with because it’s one of those things that although we know we’re right and we could tell them, “Don’t worry about it.” It’s affecting them and I think it doesn’t come across really well when you tell them, “oh, just don’t worry about [it]” or “that shouldn’t bother you” when you know it will bother them. But I think as time goes on, it becomes less and less of an issue. And we’ve talked to people often who’ve been in this business a lot longer than we have  and they sometimes look at us like, “Yeah, you’ll get better at it.”

You guys put the “real” in reality show — opening up about mental health, relationship problems, dealing with trolls, etc — why was it important for you to show both the good and the bad about your life?

Charli: I think because that is our reality, you know? If we only showed the good sides, it would be, like, a highlight reel of our lives. And I don’t think that that’s true to us, you know? They’re ups and downs and the cameras are there filming and if you’re having a bad day or going through something, you can’t just be … like, “Don’t film this.” So really just depends, you know?

What is it like sharing your lives on the reality show versus on social media?

Marc: That’s the reason why we did this show is because people had all kinds of notions about who we were, but you can’t really get who we are in a 15-second clip and short-form video. And we all decided that this is something we were going to [do], an adventure we were going to take as a family. And if we’re going to do it, we might as well open the world up to who we really are. And we didn’t set out to say, “Hey, let’s make this as authentic as possible.” I think that’s, you know, kudos to Dixie and Charli who — they’re the ones that have always shown their true selves and things that I don’t think a lot of other people show sometimes. And even when I was younger there were certain things that were off limits and no one talked about mental health or therapy or anything like that. And I think it’s — I’m not saying they were pioneers in that — but they’d definitely were open to express all the things that a lot of people haven’t expressed throughout the years.

Charli, as shown in an episode, you love vision boards. What is on everyone’s vision boards? What’s coming up next? Charli — more dancing, a skincare line, a role in a horror film? Dixie — more music, are you working on a second album?

Charli: I think I need to make a new vision board [laughs]. It is time. It’s time. Yeah. I think, I mean for the next, hopefully, few weeks it’s going to be very “Dancing with the Stars” based. So I feel like after that I’ll have a good idea of what my new goals are and what I wanna achieve next. But for now, I’m really just focusing on that.

Dixie: I think for me, just focusing a lot on music and modeling. Those are my two, like, biggest interests right now. And I’m having a great time with both of them.

The first two episodes of “The D’Amelio Show” are available to stream now on Hulu. Two new episodes will drop every following Wednesday.