She just posted her first photo to the site after moving back in with her mom — but Denise Richards says that’s merely a coincidence.

Sami Sheen, the 18-year-old daughter of Charlie Sheen and Denise Richards, launched her OnlyFans page on Monday — and her dad is not amused.

Earlier today, the teenager promoted her page on the subscription-only site on her Instagram feed, posting a bikini photo with the caption “click the link in my bio if u wanna see more 💋”

Her bio links include one for OnlyFans, where a subscription will set you back $19.99 a month.

In addition to the “Censored” bikini booty photo as the banner for her page, she has just one other locked photo up on the site. “Your view of me,” reads the caption.

Her father wasn’t thrilled about the move, releasing a statement to Us Weekly in which he clarified that Sami is “living with her mother” and that this decision “did not occur under my roof.”

“I do not condone this but since I’m unable to prevent it, I urged her to keep it classy, creative and not sacrifice her integrity,” he added.

Following his statement, Richards released one of her own to Page Six, saying that Sami’s decision “wasn’t based on whose house she lives in.” Denise added, “All I can do as a parent is guide her and trust her judgment, but she makes her own choices.”

Sami living with Denise comes just months after Richards said the mother-daughter duo had a “strained” relationship. Back in February, she appeared on Jeff Lewis Live and said, at the time, that the teenager was still living with Charlie.

When Jeff asked Denise if she was “happy” about Sami living with her dad, the “RHOBH” alum admitted, “Obviously I would love for her to live with me. She lived with me all these years.”

“But I think it’s very difficult raising teenagers now and especially in Los Angeles when there’s access to everything,” she explained. “We didn’t grow up with Postmates and Uber … where you have everything that you want. There are certain rules and I enforce them. And there’s different rules at [Charlie’s] house and that’s okay.”

“I would not wanna be a teenager right now with the social media and everything that you have access to,” Denise added. “It’s just, I think it’s very challenging and difficult for these kids.”

“Honestly, I have a strained relationship with her and it’s very difficult,” she said at the time. “I know though we’ll get back to where we were eventually but right now, it is strained.” 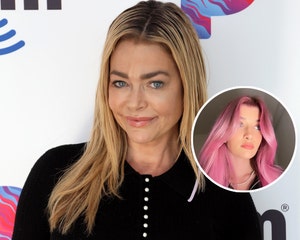 The “Wild Things” star added that Sami was “not in school,” admitting that it was an issue for her. “I just, I don’t agree with certain things,” she noted, seemingly referencing how she and Charlie’s parenting styles differ. “But that’s okay. We can agree to disagree.”

When Jeff, 51, suggested that Denise was a “strict mom,” she said, “I wouldn’t say I’m super strict, but I do have rules and boundaries and you have to follow them.”

According to Page Six, back in September 2021, Sami shared a TikTok video in which she described her mom’s home as a “hell house” and said that she felt “trapped” there. The teen also revealed she “dropped out” of high school. The videos were later made private.

Things between them appeared to have thawed in May 2022, when Sami posted a photo with her mom to Instagram, wishing her a Happy Mother’s Day and exclaiming, “i love u so much mom. u have no idea how grateful i am to have u in my life.”