“If I hadn’t met younger men in my life, I wouldn’t have had a date,” says Cher, who reveals why it just doesn’t work with “boyfriends that were hovering around my age.”

Cher is opening up about her love of younger men, amid the 76-year-old legend’s relationship with 36-year-old Alexander “AE” Edwards.

The singer gave some insight into her new romance while appearing on “The Kelly Clarkson Show” on Friday, admitting that, “on paper, it’s kind of ridiculous.”

“But in real life we get along great. He’s fabulous and I don’t give men qualities that they don’t deserve,” she continued, before listing off what she likes about him. “He’s very kind, he’s very smart, he’s very talented and he’s really funny and I think he’s quite handsome.”

Cher recently revealed she and AE — who previously dated Amber Rose and shares a 3-year-old son with her — met at Paris Fashion Week, before they were spotted together out in Los Angeles in November.

Edwards is hardly the first younger man the “Burlesque” star has dated throughout her illustrious career, leading Clarkson to ask whether why she believes older men are “intimidated” by her.

“Maybe younger men don’t care if you’re funny or outrageous and wanna do stupid things and you have a strong personality,” she continued, adding, “I’m not giving up my personality for anybody.” 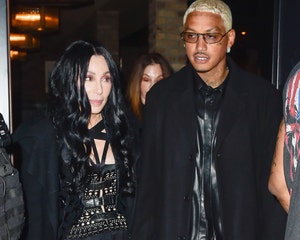 Cher previously hit back at criticism about the relationship on Twitter, after she shared a photo of AE to her page last month. She responded to one fan who said they were “immediately suspicious of his intentions towards you” and hoped the singer wasn’t being “taken advantage of.”

“As we All Know …I WASNT BORN YESTERDAY & What I Know For Sure,” she responded, in typical Cher Twitter-speak. “There Are No Guarantees. Anytime you make a Choice You Take a Chance. I’ve Always Taken Chances…It’s WHO I Am.”

“Haven’t You Got Anything Else 2 Do? Let Me Explain…I DONT GIVE A FK WHAT ANYONE THINKS,” she added.

She also shared a photo of AE in his underwear to Twitter last week, captioning the pic “A.E.Hanging Ot.”

After one fan called him handsome and said they were happy to see her happy, she responded, “I DONT GIVE MEN QUALITIES THEY DONT POSSESS.ITS A RECIPE 4 DISASTER. HES ‘NOT’ HIS TATS, HAIR COLOR, DIMOND GRILL. I [heart] HIM BECAUSE HE WASNT AFRAID.”