“Oh, by the way, I have a disease, did you not notice? I’m not even wearing shoes … You’re supposed to laugh at that!”

Christina Applegate just received a well-deserved milestone — her own star on the Hollywood Walk of Fame!

The “Dead to Me” star made her big return to the spotlight at the event, following her MS diagnosis, which she publicly revealed in August 2021. Before the celebration, she told The New York Times it would be “first time anyone’s going to see me the way I am,” as she opened up about how her life has changed since her diagnosis.

“I put on 40 pounds; I can’t walk without a cane. I want people to know that I am very aware of all of that,” she said before the event.

The first person to speak at Applegate’s ceremony were her “Married with Children” costars Katey Sagal and David Faustino.

“I just want to say I’m truly honored to be a part of history in the making today,” said Faustino, who recalled first meeting Applegate during auditions for the show. “The following 10 years were quite a wild ride. Christina and I are truly like brother and sister, even to this day.”

“Thank you for inspiring me to be fearless and really go for it, I love you,” he continued, thanking Applegate for being there for him when he recently lost his mother as well. “I’m so proud of your body of work,” he said, before praising her “powerhouse” performance in “Dead to Me” and thanking her for introducing him to his “spiritual community” and transforming his life.

When Sagal took the mic, she celebrated Christina for being “so effing famous,” before praising Applegate’s “humility, humor, grace, fortitude [and] bravery” and telling her she’s been “high on my list of life’s teachers since you were 16.”

“You know sweetheart, some of us come into this life requiring broad shoulders because what’s coming at us needs support to bear it. Broad enough to hold what shows up,” she continued. “I’ve seen you, the high highs of love and enormous success coupled with extreme challenges, but you came in with those shoulders and you bear the weight and you bend and you don’t break.”

“And your humility and irreverence allows all of us to bend with you,” she added, before concluding, “I continue to love you, laugh with you and to learn from you … I love the fact that to this day, you still call me mommy. I love you so much, my sweetheart, you’re not alone, we love you.” 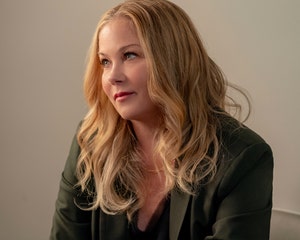 “Dead to Me” creator Liz Feldman went on to call Applegate “a lioness” on set and “den mother to all,” who always looked out for everyone in the cast. She called Applegate one of the funniest people she knows, a comic genius and “one of the greatest actors of our generation.”

Linda Cardellini, Applegate’s “Dead to Me” costar, got emotional as she stepped up to the podium, saying she immediately signed onto the show when she knew Christina was attached. “She is one of the greats,” she continued, saying she has made a “friend for life” in Applegate, who “has an incredible ability to make you feel at home” and “treats everyone with respect.”

“She is also a champion for anyone she loves. At some of my weakest moments she has hugged me, looked me in the eyes and said, ‘I’ve got you, we’ve got this,” she continued. “And you believe her, because she is exactly the person you want in your corner. A fiercely loyal, honest, generous friend and person.”

Applegate then took the podium, walking with a cane and the support of Sagal, who helped hold her up. “It’s so Katey to steal the thunder and be behind me,” joked Christina as she began to speak.

“I can’t stand for too long, so I’m going to thank the people that I really need to thank. First of all, for my family who has spoken here today, you are my everything. I love that I started with you two and I ended with you two,” she said of her coworkers and costars who spoke. “You are my people, you are my loves.”

She then thanked her agent and the rest of her team, before turning to her family.

“Lastly, the most important person in this world is my daughter. You are so much more, you are so much more than even you know,” she said, turning to her daughter. “You are so beautiful and kind and loving and smart and interesting and I am blessed every day that I get to wake up and take you to you school. You are my everything. Thank you for standing beside me through all of this — oh, by the way, I have a disease, did you not notice? I’m not even wearing shoes. You’re supposed to laugh at that!

Also in the audience were Applegate’s mother, her husband Martyn LeNoble, 11-year-old daughter Sadie — who took photos wearing a face mask — Amanda Bearse and her “The Sweetest Thing” costar Selma Blair, who also has MS. 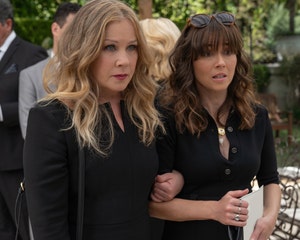