It’s a relatively straightforward idea. There’s a hull, around whose edges sits a rubber skirt – the design of which is key to speed and fuel efficiency. Large fans suck air from outside the skirt and push it into it. That fills the skirt with air and the pressure lifts the hull from the ground: the more air you push, the higher the hull gets. At which point, as you’ll know if you’ve played air hockey in a seaside arcade, it’s easier to set an object moving.

Different-sized hovercraft have different kinds and types of fans. Small leisure, rescue or race craft might have a single fan on the back, to both push the craft forward and channel air, via a duct, into the skirt. Huge American military hovercraft have four gas turbines driving skirt fans, along with moveable thrusters and rear props. 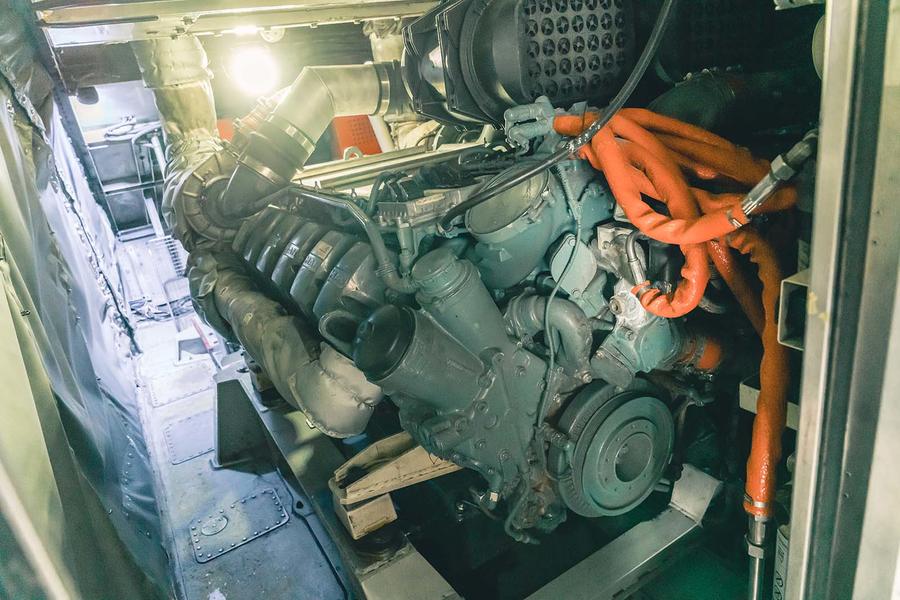 The 12000TD sits somewhere between those two extremes. It has an aluminium hull, which is flat underneath and 5mm thick. Overall, the craft is 22m long (23.7m to the edge of the skirts) and nearly 13m wide. It has two MAN V12 diesel engines mounted longitudinally and sitting side by side at the rear, driving four fans between them, by belt, with no clutches. Two fans pull air into the skirt, with fixed blades, so the higher the engine revs, the greater the amount of air that goes into it. At a cruise, the hull is between 1.5m and 1.8m from the surface.

Also at the back is a pair of five-blade variable-pitch props, 3.5m in diameter and made from wood but with nickel and rubber on their leading edges. Each can be set to neutral thrust, forwards, backwards or anywhere in between, for low-speed manoeuvres. Behind those are rudders that, in normal forward running, steer the craft.