The surprise cancellation of the UK government’s Plug-in Car Grant has left plenty of compact electric cars with prices the wrong side of £30,000, but the Citroën ë-C4, which is proving popular in European markets, isn’t one of them.

A range realignment earlier in 2022 involved Citroën adjusting the car’s entry and mid-level grades and prices, bringing the new bottom-rung ë-C4 Sense in a whisker under £30,000, even without the government’s £1500 off. And for now, that’s where the cheapest version of this car stays.

We will have to wait to test this car at its cheapest, however, because Citroën could lend us only the more popular range-topping Shine Plus with which to test a couple of other mechanical revisions that it has made to the ë-C4 since its launch two years ago.

Like its e-CMP platform relations from DS, Peugeot and Vauxhall, the ë-C4 now has a revised heating-and-ventilation system complete with a heat pump as standard, as well as a slightly longer overall transmission ratio, the latter to the benefit of running efficiency but coming at the cost of a little acceleration.

Those who study vehicle specification sheets closely may have already noted that Citroën’s 2022-model-year ë-C4s do 0-62mph in 10.0sec, whereas the earlier ones needed only 9.0sec for the same sprint. Longer gearing is the reason why, although the car also has new A+ rated economy tyres to boost its efficiency and range. 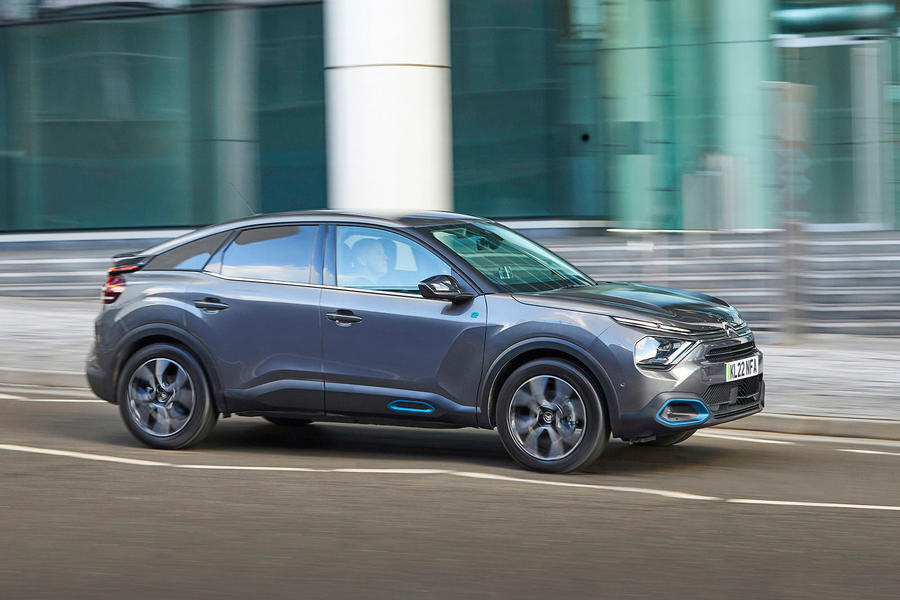 Not that the new ë-C4 feels slow on the road. It still has plenty of instant pick-up around town and as you accelerate up to the national speed limit – at which point its 134bhp begins to feel more weedy. Even so, there’s very respectable performance and great drivability everywhere but perhaps on the outside lane of the motorway.

When corners come, the ride and handling is soft, malleable, lightly weighted and a just little bit roll-happy. Nothing nearly serious enough to undermine the grip levels or general stability, though, just to make the car feel usefully comfy and a little bit Citroën-idiosyncratic.

It’s something to take unexpected enjoyment from driving keenly, as it happens, perhaps because so few modern cars take the soft-and-gentle approach to getting down the road any more. If you can make good time from point to point in an ë-C4, you’re fully involved in the process and very likely enjoying what you’re doing. This isn’t quite some modern, electrified 2CV, but its dynamic positioning relative to more serious-feeling rivals isn’t too dissimilar.