SingleStore Inc., the cloud-native database startup, today closed on an additional $30 million round of funding on top of the $116 million raised in July.

The Series F2 round announced today follows an $80 million Series F round of funding in September 2021, which was itself followed by a $116 million extension to that round in July. SingleStore said existing investor Goldman Sachs led the F2 round and was joined by new investor Prosperity7, bringing its total amount raised to $434 million, according to Crunchbase data.

SingleStore’s uncanny ability to raise funds at a time when the global economy is under pressure suggests that it’s onto something really big with its dual transactional-analytical database, which performs tasks that are normally carried out by separate products.

Transactional workloads are applications that require the ability to quickly retrieve specific database entries or add new ones. An inventory tracking system, for example, requires the ability to retrieve product availability information quickly from a company’s product database.

Meanwhile, analytical workloads refer to applications that extract insights from a company’s business data. They process information differently than transactional workloads. For example, they require the ability to scan a large amount of database records for insights and, in some cases, must also perform calculations on the retrieved information.

Companies have traditionally relied on separate databases for each workload type. SingleStore, in contrast, says its platform can support both transactional and analytics use cases, thereby removing the need to use multiple software products. In this way, SingleStore says, it can massively simplify information technology operations.

There are other benefits too. The company claims it can deliver superior performance with its database. That’s because, when companies use separate databases for transactional and analytical workloads, they often must synchronize their records between the two to ensure information consistency. This takes time, so by removing the need to do this, SingleStore can speed up the time it takes to process data.

Yet another advantage it provides is built-in extract, transform and load or ETL features. Normally, before a company can glean insights from its data, it must move this information into a centralized data processing environment. That normally involves using third-party ETL tools, but there’s no need to with SingleStore. 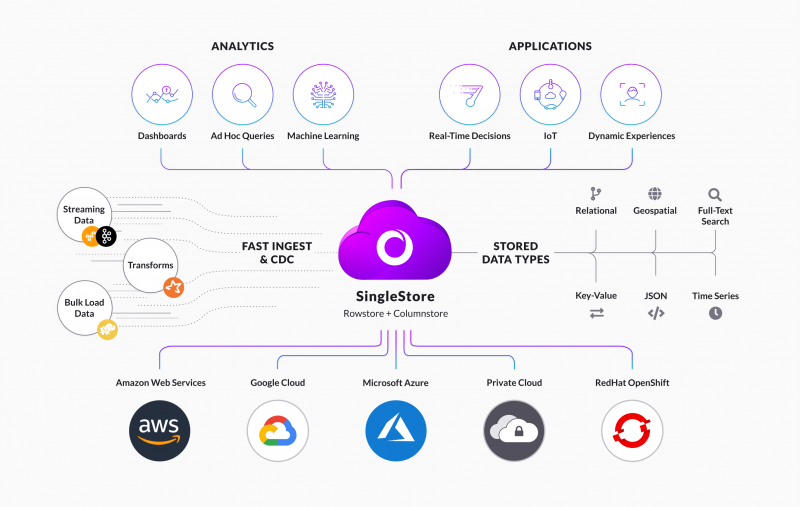 It’s not only vast amounts of money that SingleStore has been able to attract, but also high-profile customers, with the likes of General Electric Co. and Dell Technologies Inc. among the users of its database offering. SingleStore has been making progress in other areas too, nearly doubling its headcount over the past 12 months and opening new offices in Australia, Ireland and Singapore. The startup said it will continue to hire more staff going forward as it grows out its products and services.

“The company is addressing both databases and analytics through a very efficient system that is fully scalable on-premises, within a cloud and across multiple clouds,” Tayeb said. “With the company’s outstanding team and great execution, we believe SingleStore’s competitive advantages and value add will continue to grow in the coming years.”