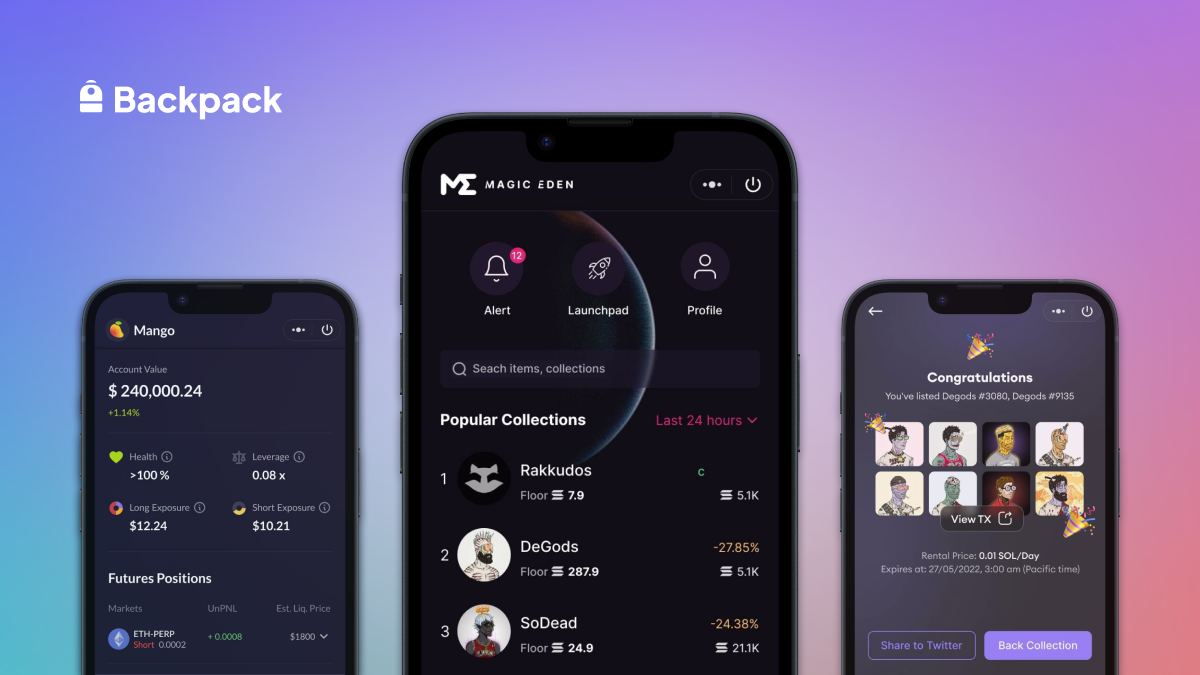 Coral, the makers of the Anchor development framework built for the Solana blockchain, have an interesting proposition: They want to create nonfungible tokens that can launch applications.

To make this happen, Coral raised $20 million in funding co-led by FTX Ventures and Jump Capital today in a strategic funding round. Multicoin Capital, Anagram and K5 Global also participated.

Nonfungible tokens are a type of crypto asset built atop blockchain technology that represent the ownership of a virtual item such as artwork, music, files, documents, tickets and video game items. They can even have expanded functions such as providing discounts at merchants, VIP access at concerts and myriad other use cases.

With the funding, Coral intends to launch Backpack, an interactive, first-of-its-kind crypto wallet that will allow users to hold NFTs that can launch mini-applications by becoming executable NFTs, or xNFTs. As a result, these NFTs will become gateways to applications inside of Backpack and represent a portal to applications, games or assets built on any chain.

“XNFTs make the crypto experience smoother, require less steps, and give projects the power to create more customized experiences for their communities,” said Coral founder Armani Ferrante. “As a best-in-class wallet, our goal is to make Backpack the default portal to the Solana ecosystem.”

Coral co-founder Tristan Yver told SiliconANGLE that BackPack is meant to be much more than just a wallet — a full platform that allows users to store tokens and act as an operating system to launch blockchain apps.

“Today, wallets are the gatekeepers of blockchain ecosystems,” Yver said. “They’re permissioned, closed and closer to Web2 than they are to Web3. If you want to build a new protocol, you need to lobby for integration, but there are so many protocols on so many blockchains that no one can expect to be included. It’s a product management nightmare, and it’s holding back innovation.”

With the addition of xNFTs, users can do more than just store and manage their tokens in BackPack. To make a wallet work with a crypto app, it must first be connected. This extra step adds an increased security risk for users.

For example, tokens that are connected to a particular app experience such as a video game could be managed in BackPack. But instead of needing to first launch the game in a web browser or hunting down that particular app on the computer and connecting it, users would only need find the xNFT token directly in their wallet to launch it.

“Like a wallet, Backpack manages your private keys and connects to apps, but unlike anything else, it’s asset and protocol agnostic,” Yver said. “Everything in the wallet is an xNFT. This is a big deal. Most wallets only show your tokens. Backpack, however, is a home for everything. It’s an open, programmable system built for Web3.”

According to Yver, within BackPack xNFTs will be more than just tokens, but connecting them to code enables the launch of applications so they can become application programming interfaces in their own right. In this way, xNFTs are portals similar to plug-ins, apps or widgets in web browsers that connect to the entire blockchain ecosystem.

“All wallets right now are just tools for blockchains,” he added. “Backpack doesn’t want to be a tool, it wants to be a network/platform in its own right, where people build exclusive experiences for it. If developers are building xNFTs on Backpack, they get access to all this tooling, distribution and Web3 experience.”

Coral is launching a private beta of Backpack today with open-source code. Anyone is welcome to sign up for the beta at backpack.app and community members of the Backpack Discord will get priority access. A public beta is planned to begin in about two months.