The concept car incorporates Dacia’s ‘Bring-Your-Own-Device’ approach to infotainment, where the computing power and technology is provided by a user’s smartphone.

The Manifesto introduces Dacia’s ‘YouClip’, a feature that will be offered in its future models starting with next year’s next-generation Duster. It is essentially a universal mounting point, which can house a whole host of accessories from cup holders to phone mounts. In time, it could even replace cup holders altogether, according to Gauvin.

The concept car is of no specified drive type, with Gauvin describing it as ‘multifuel’, able to be powered by anything from petrol and LPG to hybrid and electric. It is extremely lightweight, with a claimed weight of 720kg when fitted with the heaviest of its potential drivetrains, an all-electric one.

Dacia says that the Manifesto is constructed from lightweight, sustainable materials, among them parts of the chassis and bodywork. This is made from a new type of plastic called Starkle, which features 20% recycled and already processed polypropylene to give the panels a flecked look. It will also be used on future models starting with the Duster for exterior cladding. 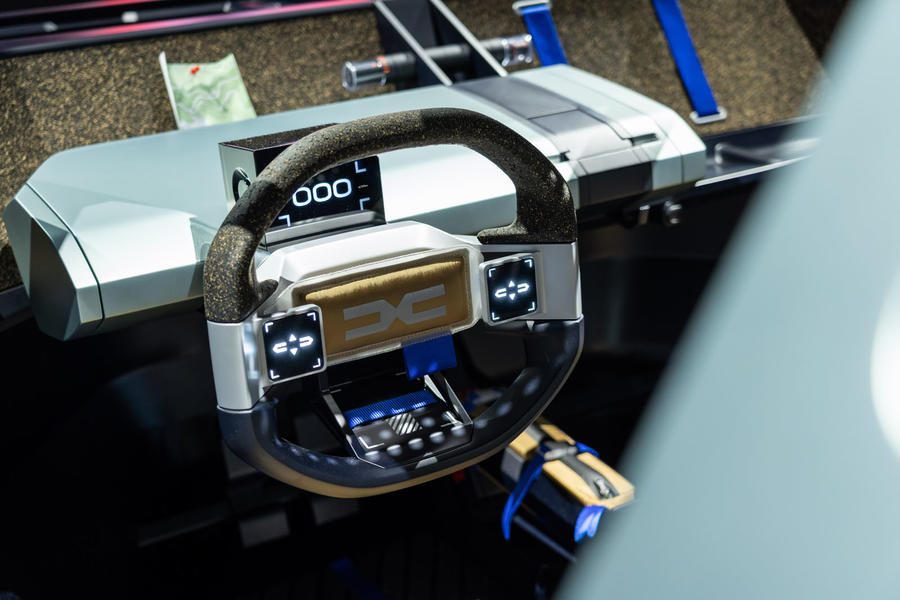 This lightweight approach is absolutely key for Dacia in order to keep its pricing down, and is a strategy the firm will continue to employ in the future. The lighter its cars, the less emissions they produce, and the lower the cost can be due to them only having what equipment is needed.