Big-data startup Cinchy Inc., which is pioneering the concept of “dataware,” said today it has closed on a $14.5 million Series B round of funding from a single investor, Forgepoint Capital.

Cinchy is the creator of a unique “dataware” tool that provides companies with instant visibility into their organizational data. It enables multiple systems and users to collaborate on a company’s corporate data in real time without the need for separate application databases.

Essentially, Cinchy can be thought of as a data integration platform that connects all of a company’s information. It bundles this with data management services, enabling companies to access and utilize data from multiple sources.

Cinchy co-founder and Chief Executive Dan DeMers told SiliconANGLE that dataware is a platform technology that companies can use to create a network-based data architecture, powered by what he calls “data liberators,” or bi-directional data connectors. Companies need this architecture, he said, because they’re struggling to manage masses of data associated with each of the applications they use to power their businesses.

This sprawling mass of data can cause all kinds of problems and difficulties, DeMers explained, with fragmented and incomplete information leading to the wrong business decisions being made, scattered customer data that’s difficult to secure, and the challenge of adhering to compliance rules. At the same time, he said, companies are being tasked with combining these multiple data copies to make sense of them.

Cinchy’s architecture solves those issues by removing the need to make data copies, or integrations, when launching new solutions. Instead, data can be “linked,” and the process actually gets faster and more efficient as the fabric powers more solutions. It provides an easier way to tap into diverse data sources, which at many companies include on-premises, cloud, SQL and NoSQL database systems.

“All the problems created by data silos come down to one thing – the way apps and data work together,” DeMers said. “We have to use an app in order to interact with data. This is the way it has always been done.

By contrast, he explained, dataware disrupts this thinking and poses the question: What if data became independent? No longer owned by applications, data would be unchained to stand on its own. And this would eliminate the entire process known as data integration, which eats up a whopping half of entire IT budgets today, on average. It would also spell the end of data silos and copies.”

With Cinchy, he added, businesses now have a simple way to make their data independent by eliminating their reliance on time-consuming data integrations and establishing fully autonomous data networks. 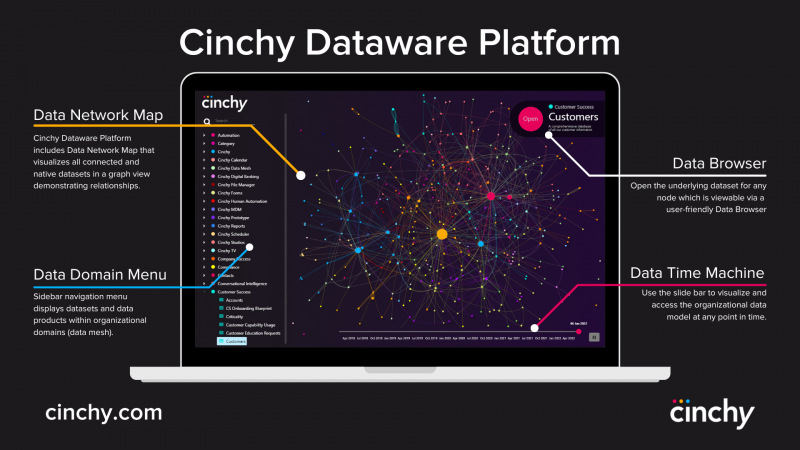 DeMers said the thing that really makes Cinchy unique is that its dataware platform is not just another data integration tool. Rather, he said, Cinchy can be thought of as the “anti-integration solution.”

He said Cinchy’s competitors like to throw around terms such as “data fabric” and “data mesh” and make similar promises about ending data integration, but in reality those offerings are more focused on workarounds to deal with data fragmentation. As a result, they only tend to exacerbate the challenges around data agility and compliance, he said.

“We use Cinchy ourselves to run our entire business and as a result we have zero data siloes, zero data copies, with zero internal data integrations,” DeMers continued. “Everyone has self-serve access to discover, query, create and change data, with the only thing standing in the way being the access that has been granted by the rightful owner of that data. All changes to any data are version controlled, access controlled, and available to apps and users based on very granular controls. We believe we’re the only player in the market using a network-based architecture to address the root cause of fragmented data and eliminate data integration altogether.”

Cinchy said it will use the funds from today’s round to expand its sales and product teams. It’s also planning to launch an update to its offering that includes various “pre-built dataware solutions” that will help customers to liberate trapped data in siloed software-as-a-service applications.

“With every investment, we promote and support technologies that are designed to disrupt long-held business practices, and there’s no question that data-enabled collaboration needs exactly those foundational advances,” said Forgepoint Capital Partner Leo Casusol. “We’re already seeing the power and impact of Cinchy Dataware in transforming and enhancing business practices for customers across industries, and the company is just getting started.”