The Idol alum confirms he’s “taken a step away” from the church.

“American Idol” alum David Archuleta is speaking out about how his relationship with the Mormon Church has evolved since he came out as queer last year.

In a new interview that aired on “Good Morning America” on Friday, the 31-year-old singer detailed his decision to take a step back from the Church of Jesus Christ of Latter-day Saints earlier this year, revealing what led him to experience a “faith crisis.” 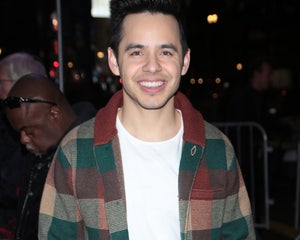 David Archuleta Says God Told Him to ‘Post About’ Coming Out

Archuleta — who was raised Mormon and grew up in Utah — came out as a member of the LGBTQIA+ community in June 2021 in an Instagram post, noting that he was “maybe a spectrum of bisexual.” The Season 7 “American Idol” contestant said he had previously come out “as gay” to his family in 2014.

While speaking to ABC News’ Steve Osunsami, the “Crush” singer was asked if he’s “left the church,” to which he replied, “I’ve taken a step away,” noting that he came to the decision at the “beginning of this year.”

“I’ve had a faith crisis this year,” Archuleta added. “So now I’ve had to deconstruct everything.”

He said he realized that it was time to move away from the Mormon Church after he met with a church leader, who seemingly didn’t accept his sexuality.

“I think three times in that conversation he said, ‘Well, maybe we just need to find you a good girl. Maybe you can find a good girl,'” Archuleta told Osunsami. “And I’m like, ‘That’s not the solution.'”

“I said, ‘Can you see why I’m thinking so much? Because I’m trying everything I can to find a way to still belong here because this has meant so much to me.'”

While the church leaders — who are known as “apostles” — have seemingly rejected his sexuality, Archuleta said many people in the church have accepted him. “I would say, it’s the church structure more than the people,” he said. “Because the people have been amazing.”

Osunsami noted that since he’s been publicly out, the “A Little Not Over You” singer had a relationship with a man and is dating again, and revealed he “sees himself marrying a man someday.”

However, in the years before he came out, Archuleta revealed that he almost got married three times — to three different women, with his struggles with his sexuality and the church almost leading him to consider suicide.

“You’re trying to decide what’s worse?” he said to Osunsami. “Is it worse for this feeling of being desiring men to finally explode where I can’t control it anymore and you look at it as that’s Satan trying to take over my soul? Or is it better for me to end my life and, that way, I’m free from that temptation?”

“It got to a point where I realized, You know what? There’s something in me telling me that there’s value to me still living even if I was queer,'” he recalled. “That was really hard for me to accept, because my church wasn’t outright aggressive towards gay people, but it’s a very passive-aggressive, stern stance they have about it.”

“A rejection?” Osunsami asked, to which Archuleta replied, “Yeah.”

According to the Osunsami, “The apostles say they want to keep meeting with him,” noting that they met with Archuleta on Thursday. “But he says he’s not going to try to become something he’s not, and sometimes the healthiest thing you can do is walk away.”

While speaking with the ABC News journalist, the “Faith in Me” singer said he wants everyone — including people of faith — to accept their differences.

“Don’t think that just because someone is different from you that they are rebelling against what you find valuable meaning in your life,” Archuleta said. “You may have a lot more in common with what it matters to you just to be loved, to contribute to this world in a positive way, to love and care for your family to respect other people. LGBT people may do that in a slightly different way.”

“It just looks slightly different,” he added. “On the outside.”