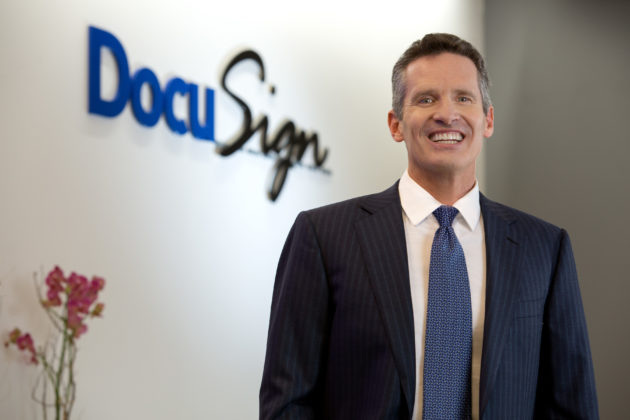 DocuSign has appointed board chair Maggie Wilderotter as interim CEO. The company said that Wilderotter, a former CEO of telecommunications provider Frontier Communications Corp., will “help the senior executive team drive improved execution in all phases of the company’s business.”

“DocuSign has the people, the products and the brand to transform the way the world agrees, making us a leader in our Anywhere Economy,” said Pete Solvik, DocuSign’s lead independent director. “As we turn the page and begin DocuSign’s next great chapter, I’d like to express our gratitude on behalf of the full Board to Dan Springer for his leadership through a period of unprecedented growth over the past five years.”

Springer (pictured) joined DocuSign in 2017 after serving as the CEO of Responsys, a marketing software provider that was acquired by Oracle Corp. for $1.5 billion. In 2018, DocuSign listed its shares on the Nasdaq through an IPO that raised $629 million. The company’s shares jumped more than 30% on their first day of trading.

DocuSign provides a cloud platform that enables users to sign documents electronically. The company says that it has more than 1 billion users and 1 million customers worldwide, including many major enterprises.

Under Springer’s leadership, DocuSign experienced significant revenue growth. The company’s annual sales grew from $381.5 million at the end of its 2017 fiscal year to $2.1 billion in 2021. Along the way, DocuSign has expanded its focus beyond electronic signatures to adjacent product categories such as contract management software.

But despite its efforts to create new revenue streams, the company’s growth has slowed in recent quarters. The leadership change announced today comes after DocuSign reported slowed growth and lower-than-expected earnings per share during the first quarter.

The company increased revenues by 25% in the first three months of 2021, to  $588.7 million, above the $581.8 million that analysts polled by Refinitiv were expecting. But DocuSign’s growth rate was below the 58% revenue increase that it reported 12 months prior. Additionally, its earnings of 36 cents per share missed analyst expectations.

DocuSign’s shares have lost about 60% of their value over the past year amid investor concerns about its growth strategy and a broader selloff in tech stocks. According to CNBC, several financial institutions have downgraded the stock following its most recent earnings report.

The company’s announcement of its leadership change today was received positively by investors. DocuSign’s shares are up more than 1.2% in trading this morning.

“I’m excited to lead DocuSign in this new capacity as we focus on helping our customers maximize the market opportunity that comes with the digital transformation of agreements worldwide,” said Wilderotter. “I look forward to improving execution and continuing to drive profitability at scale for our company with the talented and capable DocuSign team.”