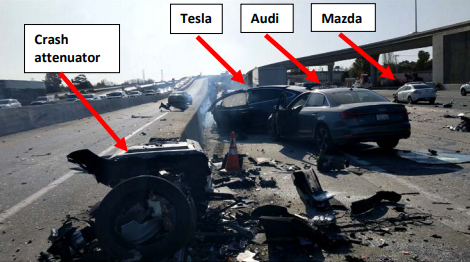 A Tesla Inc. engineer has testified that the company faked a video showing a Model X driving itself back in 2016.

Ashok Elluswamy, Tesla’s director of Autopilot software, revealed details of the fake video in a deposition as part of a lawsuit against Telsa into a 2018 fatal crash (pictured) involving an Apple Inc. engineer. The video shows a Model X supposedly navigating by itself, including stopping at a red light and accelerating.

According to Reuters, Elluswamy said Tesla’s Autopilot team set out to engineer and record a “demonstration of the system’s capabilities” at the request of Chief Executive Officer Elon Musk, but the vehicles did not have the capabilities at the time. Musk also tweeted the video as evidence that “Tesla drives itself.”

The video – shown above, includes an introduction stating that “the person in the driver’s seat is only there for legal reasons. He is not doing anything. The car is driving itself.” Except that, apparently, that wasn’t true.

Elluswamy claims that Tesla used 3D mapping on a predetermined route from two Silicon Valley locations and that drivers did intervene to take control in test runs. Worse still, Elluswamy claimed that the vehicle crashed while attempting to park itself at the final destination.

A car company providing a future demonstration of what is possible is not unusual, except that the video clearly does not state that. Added to the mix is Musk’s tweet that would lead any regular viewer to believe that the vehicle was capable of driving itself at the time.

The testimony came to light as part of a lawsuit into a fatal crash involving Apple engineer Walter Huang in 2018. Huang was behind the wheel of a Model X when it run into a concrete lane divider at high speed, catching fire and killing Huang in the process.

A National Transportation Safety Board report into the accident in 2020 slammed both Telsa and Apple for the crash. Huang was found to have the Model X in Autopilot and was playing a mobile game and not paying attention to the road at the time the crash took place.

The NTSB found that the Tesla Autopilot system did not provide an effective means of monitoring the driver’s level of engagement and that alerts in place were insufficient to elicit a response to prevent the crash or mitigate its severity. The report also determined that Autopilot’s crash avoidance assist systems did not detect the possibility of the collision occurring and instead accelerated into the crash situation.

Apple was also condemned in the report over the fact that the victim was using his iPhone at the time of the crash. The board criticized Apple for failing to have a company policy that bans the nonemergency use of portable electronic devices while driving.