Citroën has confirmed that it will produce a limited production run of the Ami Buggy, building a further 1000 versions of the rugged special edition of the Ami quadricycle based on the My Ami Buggy Concept.

The tiny Ami city car is on sale in the UK in both passenger and commercial form. In an attempt to highlight its versatility, the firm at first revealed a one-off Buggy, which added off-road elements to the electric machine, before following up with a 50 unit production run of the My Ami Buggy earlier this year.

The 50 were limited to France, but it’s hoped that some of the 1000 Buggys due for production next year will be coming to the UK, featuring as yet unconfirmed cosmetic changes.

We drove the one-off concept earlier in 2022: what does the Buggy’s rugged styling and features add to the Ami? 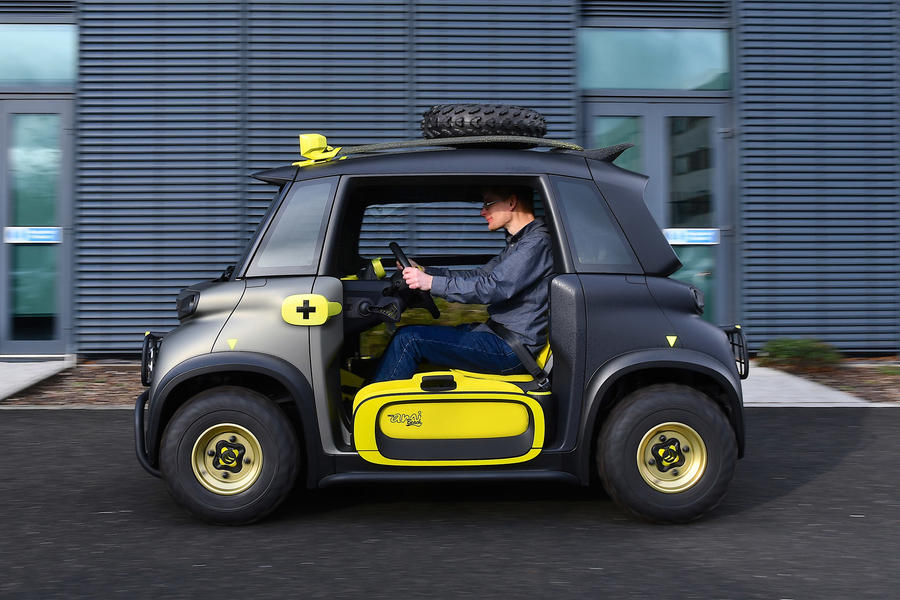 The Ami Buggy Concept is essentially a modern French reimagining of the Mini Moke and other small beach buggy concepts. With its small-but-chunky tyres, fun styling elements and open-air driving feel thanks to the absence of doors, you can see the appeal of using one for carefree cruising basking in sunshine on the French Riviera.

That appeal is tested somewhat in the cold, windswept car park of Stellantis’s UK headquarters near Coventry. Instead of letting in a cooling sea breeze, the open sides expose me to a stiff, icy wind. I consider stopping to attach the transparent rainproof panels that can be added in place of doors to offer some protection from the elements (inspired by those on the Citroën Mehari, apparently). But in truth they’re a bit of a faff, and with limited time I opt to press on, especially since the imminent threat of rain has added some urgency to our test drive.

The Ami Buggy may have rugged styling that hints it can conquer all elements, but as a one-off concept that was built purely for show, there’s a fear that wet weather could damage it. Best hurry to get some running in, then.

Except hurrying isn’t really an option: the concept’s chunky mud tyres, set off nicely against matt gold rims, look fantastic, but they only just fit within the Ami’s wheel arches. Turn the wheels too far, and they’ll start rubbing at the one-off’s customised bodywork. Largely limited to travelling in a straight line and very gentle turns, it’s predictably impossible to actually learn anything about the Ami Buggy’s dynamic potential.

Arrival to drop half of workforce in cost-cutting drive