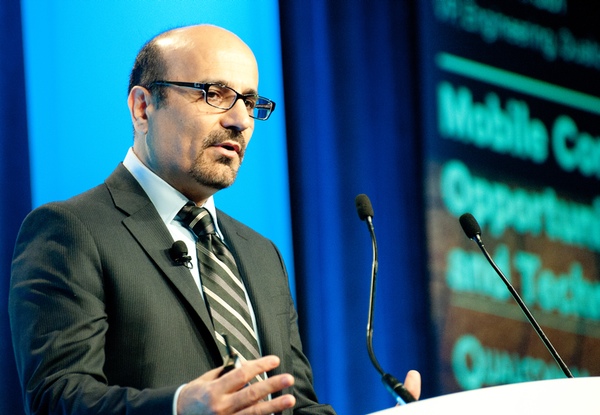 A former vice president of research and development at Qualcomm Inc. has been charged with conspiring to fraudulently sell a startup to the chipmaker for $150 million.

Prosecutors say that under the terms of Karim Arabi’s (pictured) contract with Qualcomm, anything that he created while working for the chipmaker was its property. So Qualcomm unwittingly paid millions to acquire its own technology, the prosecutors allege.

The U.S. Department of Justice claims that Arabi created new microchip technology and hid this from his then-employer Qualcomm. He later enlisted the help of another former Qualcomm vice president, Akbar Shokouhi, to help found a new startup called Abreezio LLC, which claimed to have developed the technology. The indictment adds that when Arabi did this, he was “bound by agreements generally providing that intellectual property he created during his period of employment would belong to” Qualcomm.

The intellectual property developed by Abreezio is said to include “IP and EDA tools focused on PPA optimization in advanced technology nodes,” according to the LinkedIn bio of another, unrelated former Abreezio executive.

It’s alleged that Arabi worked with four other individuals, including Abreezio Chief Executive Officer Sanjiv Taneja, to obscure his role in developing the technology because of the provisions in his contract with Qualcomm. Instead, the conspirators marketed the technology as being the brainchild of Arabi’s younger sister, Sheida Alan, a Canadian graduate student. They claimed that Abreezio was an angel investor-funded startup focused on design IP. Later, it’s claimed that the conspirators used this narrative to entice Qualcomm to acquire the startup.

Court documents allege that Arabi filed provisional patents for the technology he designed under Alan’s name, stating he was secretly involved in most matters relating to the company, even helping to choose its brand name. The accused conspirators sought to hide his involvement, using fake email accounts and even having Arabi impersonate his sister, the complaint read.

In addition, Abreezio relied on Arabi’s privileged position at Qualcomm to obtain information on comparable technology. This information was used to help market Abreezio to the chipmaker, documents state.

Qualcomm ultimately acquired Abreezio for $150 million, under the assumption that all parties involved with the company had been disclosed. Prosecutors say Alan received almost $92 million from the sale, with Taneja landing $10 million and two of Shokouhi’s companies receiving $24 million from the deal.

The indictment says the defendants later laundered the money they received through interest-free loans and foreign real estate.

“This case is a good lesson learnt for enterprise due diligence when it comes to acquisitions and R&D,” said Holger Mueller of Constellation Research Inc. “With Qualcomm being a perennial player in the IP business, it’s all the more surprising that one of its employees was able to trick it into buying its own creation. A number of best-practice checks must have gone missing for this to happen.”

Rob Enderle of the Enderle Group told SiliconANGLE that the case is not uncommon, as he had stumbled upon a number of similar incidents himself while working as an auditor at IBM Corp. However, he said most dishonest employees end up getting caught because this kind of fraud requires the collusion of several individuals. All it takes is for one of them to feel they were mistreated in some way to report it and turn in their co-conspirators, he said.

“This incident also points out why so many conspiracy theories are groundless; complex conspiracies like this one generally fall apart as this one did,” Enderle added. “Pulling off something like this requires a high degree of trust and loyalty. But since the act showcases dishonesty and disloyalty, it is likely to fail because you can’t trust someone who has already demonstrated this dishonesty. In every case I ran into, catching the fraud wasn’t due to the audit process but because someone involved came forward and reported the activity.”

The charges against Arabi, Alan, Taneja and Shokouhi were unsealed on Aug. 9, and all but Alan has since been arrested. Alan is currently being detained in Canada awaiting extradition proceedings. All four have been charged with fraud and money laundering offenses, and face up to 20 years in jail and fines of $250,000 if found guilty. They would also be required to forfeit any property derived from the fraud.

Shokouhi has reportedly already pleaded guilty, with the other defendants yet to register their pleas.