CHISORA was 10-0 and Fury 6-0 when the fight was first mooted. Chisora was serving a four-month ban for biting Paul Butlin, a decision that ruled him out of challenging British champion Danny Williams. Del admitted in a letter to Boxing News that he had been offered the Fury fight. He said it could go ahead for “the right money.”

Hughie Fury, Tyson’s uncle and trainer at the time, made an improved offer, saying: “Tyson will give Chisora his purse if Derek wins. If Tyson wins, Chisora will still get paid. We can’t say fairer than that.”

CHISORA’S challenge for the British title was shelved after Danny Williams was ruled out with a viral infection – with Fury asked to step in. Fury, however, was in the States at the time with Emanuel Steward and was unavailable.

FURY outlasts John McDermott in their rematch at a sweltering Brentwood Centre. The fight is a final eliminator for the British heavyweight title, held by Chisora.

Chisora wasn’t keen on the fight. He was hoping for a shot at WBO and IBF belt-holder, Wladimir Klitschko. A fight that had already fallen through twice.

Fury said: “When I fight you, I will knock you out.”

Chisora answered: “There’s not enough money in the fight.”

Fury ripped his shirt off and said: “I don’t fight for money, I fight for honour. Let’s have a fight now, the old-fashioned, street-fighting way.”

Fury remembered it taking more than 20 security men to get him out of the exits. He said: “They asked me nicely to leave and I left nicely. It’s a good job they didn’t try to push me out of the door… I paid £100 for the ticket and asked for a refund, but I didn’t get it.”

MICK HENNESSY, then Fury’s promoter, outbid Frank Warren to stage the Chisora-Fury fight for the British and Commonwealth belts.

Hennessy was taking a gamble as he didn’t have a television deal at the time, but Channel Five agreed to screen the fight, from Wembley Arena on July 23, 2011.

Fury takes a pair of little people with him to the press conference to announce the fight and agrees a £100,000 side bet with Chisora.

IN a telephone press conference days before the fight, Fury called Chisora “a coward” and “a bully” and threatened to “kill” him. Chisora put the phone down. Fury apologised.

Boxing News and the bookmakers fancied Chisora would keep his British and Commonwealth titles by beating Fury.

During the referee’s instructions, Chisora looked up at Fury and said: “You’re not that tall.”

Fury was around eight inches taller than the champion – and hard to get to. Chisora had a spell of pressure in the second, but by the end of the seventh, Don Charles threatened to pull Chisora out.

Chisora was defiant, saying: “Come on, come on” at Fury as the gap between them widened on the scorecards. Fury went on to win by scores of 118-111 and 117-112 (twice) and Channel Five later reported around three million viewers saw it.

FURY was looking for a fight after David Haye twice pulled out of fighting him – costing him around £5 million in lost earnings – and Frank Warren called him with an idea.

Fury’s promoter, Mick Hennessy, was without a television contract and Warren offered Fury a spot on his show at the Copper Box Arena in February, 2014.

Chisora was also on the show and provided both he and Fury won, they could meet again.

The rematch is of interest to Fury given that Chisora has had four straight knockouts and is in the top 10 with the WBC, IBF and WBA.

Fury, weighing a blubbery 19st 8lbs, bludgeoned Minnesota southpaw Joey Abell to defeat in four rounds in his first fight for 10 months and then Chisora dropped Kevin Johnson and beat him over 10 rounds.

FRANK WARREN announced Fury-Chisora II would go ahead in Manchester on July 26 – unless Fury was banned. At the press conference to announce the fight, Fury tipped over a table and walked out.

Fury threatened and swore at Chisora throughout a press conference a couple of weeks before the fight.

Chisora tried to calm Fury down and Tyson answered: “I don’t give a f**k how many women and children are in the audience. This is my show, I do what I want. This is boxing. It isn’t tap dancing.”

Fury took to Twitter to apologise, writing: “Just a show, forgive me.”

Five days before the fight, Fury got a call telling him Chisora has fractured his hand sparring Alexander Ustinov – and the fight is off.

Ustinov agreed to step in, but on the day of the fight, Fury’s uncle, and former trainer, Hughie, was rushed into intensive care and Tyson pulled out.

WARREN revealed Fury would face Chisora in their rearranged rematch at the ExCel Arena on November 29.

On the same show, Billy-Joe Saunders would defend his British, Commonwealth and European middleweight titles against Chris Eubank Jnr

The Board handed Fury a £15,000 fine for his outburst at the previous Chisora press conference. Fury decided to put a tape across his mouth when he met the media to announce the rematch.

He answered questions with hand gestures and when asked how long the fight would last, Tyson stuck up his middle finger before rethinking. He stuck up two fingers and pointed them at Chisora.

CHISORA was 17st 3 ½ lbs – so around 20 lbs lighter than the first fight – and had momentum. He looked to be in the form of his career, while Fury had boxed only four rounds in the previous 19 months.

Fury said he planned to win without taking a punch and when he boxed as a southpaw, Chisora struggled to get near him.

The crowd becomes restless as Fury handed out a boxing lesson and before the seventh, Charles asked Chisora: “Do you want to be in there?”

Chisora quickened his feet but the beating continued. By the end of the round his right eye was swollen and his mouth bloodied. Chisora was told before the 10th: “It’s now or never, no regrets tomorrow morning,” but it was too late.

Fury asked referee Marcus McDonnell to step in during the 10th, but he finished the round and was pulled out by Charles.

FURY, six months after dethroning Wladimir Klitschko, said he has “a soft spot” for Chisora ahead of his fight with Kubrat Pulev for the European championship in Hamburg. Fury flies over to the fight and sees Chisora beaten on points.

FURY turns up in Monaco at the weigh-in for Chisora’s fight with European champion Agit Kayabel. The inactive Fury weighed well over 20-stone.

The pair shared a few private words, but cameras pick up Fury saying: “I owe you the trilogy.” Chisora answered: “It will be a good fight… I can’t wait.”

Fury was overheard saying he needs to lose seven stones in weight. Chisora was beaten on points.

FURY was preparing for his rematch with Deontay Wilder when he reveals his future plans.

After Wilder, he planned to face Anthony Joshua and then: “I’ve always said to my old pal Dereck Chisora I’d have a farewell fight with him. Maybe we can get the Old Trafford fight with old ‘Del Boy.’”

CHISORA said he is “willing to put my house on Dillian Whyte knocking Tyson Fury out” ahead of their fight at Wembley Stadium.

Fury said Chisora was “homeless” after he chinned Whyte in six and added: “I have got a house next to mine in Morecambe, you are welcome in it any time, brother.”

Chisora was spotted at a celebratory get-together the following day. Fury had announced his retirement after the Whyte fight.

EDDIE Hearn revealed there was contact from Fury’s team about a possible third fight with Chisora.

Fury had previously revealed he was no longer “chum buddies” with Chisora after he picked Whyte to beat him.

FURY retired (again) on his 34th birthday – only two days after saying he was interested in meeting Chisora in a trilogy fight.

Days later, he said he planned to fight again with Isaac Lowe as his trainer only, days later, to reiterate his plans to retire.

Fury claimed Chisora turned down £2 million to fight him, saying he wanted £3 million.

CHISORA turned up at the Joe Joyce-Joseph Parker fight in Manchester where Fury is supporting Parker and confronts him at ringside.

Chisora said he’s willing to fight Fury bareknuckle. Fury told Chisora he should have signed the contract to fight him in the ring – and Chisora replied that he was never sent a contract.

THE whispers that Fury and Chisora will fight for a third time are confirmed at a press conference. 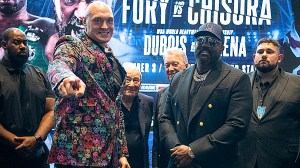