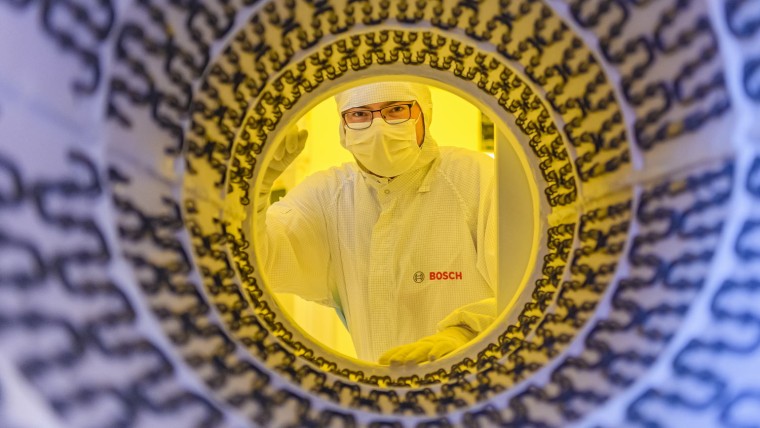 German industrial giant Robert Bosch GmbH has said it will invest €3 billion (just over $3 billion) into its semiconductor business over the next four years, adding new chip production capacity as well as centers for research and testing.

The announcement came at the company’s Bosch Tech Day 2022 event today. Bosch Chairman Stefan Hartung said the investment will be used to build two new computer chip development centers in Reutlingen and Dresden. In addition, the company plans to expand its manufacturing capacity by adding 3,000 square meters of clean-room space to an existing wafer fab in Dresden.

Bosch said that most of the money will come via grants from the EU and German federal government, within the framework of the European Chips Act, via a new Important Project of Common European Interest on microelectronics and communication technology. The European Chips Act is a new piece of legislation that aims to increase domestic semiconductor manufacturing in the EU.

The German firm will add €400 million of its own cash to the investment pot, to expand its manufacturing capacity and convert existing factory space into new clean-room space, it said. Once complete, the extension will bring the Dresden facility’s total clean-room space to more than 44,000 square meters, Bosch said.

Some of the cash will also be set aside to build a new semiconductor testing center in Penang, Malaysia, that’s expected to be up and running by the end of next year. The center will be used to test finished semiconductors and sensors, the company said.

Bosch is not interested in building cutting-edge chip fabrication processes. Rather, it said the money will be used to build facilities for manufacturing semiconductor chips for the automotive industry, with production process sizes of between 40 and 200 nanometers. That’s a lot less advanced than the 5nm and 3nm production processes now coming online at other chipmakers, such as Samsung Electronics Ltd. and Taiwan Semiconductor Manufacturing Co. Ltd.

“Europe can and must capitalize on its own strengths in the semiconductor industry,” Hartung said, explaining the company’s plans. “More than ever, the goal must be to produce chips for the specific needs of European industry. And that means not only chips at the bottom end of the nanoscale.”

Bosch does in any case expect to make a lot of money from its investments. As the company explained, the share of the average car’s value represented by semiconductor chips is likely to quadruple this decade, from under $200 to more than $800.

Although the focus is primarily legacy chips, Bosch said it will use some of the investment to pursue new avenues of innovation. In particular, it’s looking to create more advanced systems-on-a-chip, such as radar and lidar sensors that will be used by autonomous vehicles to aid in navigation. Bosch said its research will focus on enhancing these components, making them smaller and also cheaper to manufacture.