The super-stripped out Alpine A110 R, the final iteration of the car before the launch of an Alpine electric sports car, has gone on sale with a £89,990 starting price.

Called the A110 R – for ‘radical’ – it has been devised as a no-compromise, circuit-oriented plaything heavily inspired by Alpine’s involvement in motorsport.

Sitting above the entry-level A110, mid-rung GT and stiffened S, the R completes the core A110 family. It is joined by a £129,440 Fernando Alonso edition – limited to just 32 units – which gets a unique colour scheme and bespoke tuning to celebrate the career of the Formula 1 icon.

However, bosses have not disclosed whether further variants could arrive before the sports car goes electric in 2026.

With hot laps at the top of its agenda, it weighs just 1082kg – down 34kg on the “already very light” A110 S and lighter, even, than the latest iteration of the 2.0-litre Mazda MX-5. It has achieved most of its weight loss through the use of carbon parts plus some specialist tyres, she explained.

Mass has been shed chiefly by the fitment of lighter bucket seats, the removal of noise insulation from the engine bay, the swapping of the glass rear panel for an aluminium item and the use of carbon fibre for the bonnet, wheels and new-shape rear ‘window’ panel.

But it’s the enhanced focus on dynamic agility that marks the R out most obviously from its stablemates. In consultation with Alpine’s Formula 1 engineers at Enstone, the team at Les Ulis has created a much more purposeful aero package, while overhauling the chassis for maximum stiffness and response. 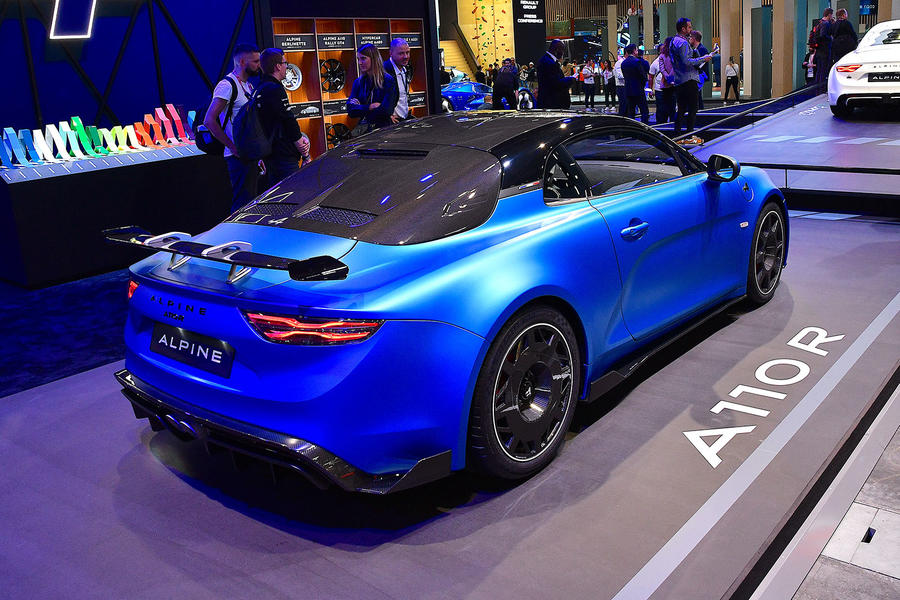 The new swan-neck spoiler, rear diffuser, flat undercarriage, flat front wheel-face designs and reshaped side skirts combine to boost downforce (by up to 29kg at top speed over the A110 S) and reduce drag (by 5% in Track mode) for both a higher top speed and greater stability in corners.