“When the shock wore off — I couldn’t be happier because ultimately my biggest prayer was whatever would be the best for Gunner.”

Heidi Montag and Spencer Pratt are gearing up to be the proud parents of two little boys!

In an interview with Us Weekly, Montag, 35, and Pratt, 38, revealed they are expecting the arrival of a baby boy after announcing their pregnancy in June.

“I’m having a boy!” the reality personality gushed. “Oh, my gosh. … I did the earliest test to find out and I just felt like my doctor had the answer so I called. And I was like, ‘Hey, just wanted to check in to see if you guys got the result?’ And they were like, ‘Actually, we just got them 10 minutes ago.’ So I couldn’t wait for Spencer and I was like, ‘OK, I’m ready!’ They were like, ‘It’s a boy!’ And honestly, I was so shocked.”

Although the “Laguna Beach” star noted that she “was convinced” that she was pregnant with a little girl, the surprise was more than well received. Heidi and Spencer are also proud parents to their 4-year-old son Gunner.

“I was going back and forth because everything felt the same as [when I was pregnant with] Gunner,” she explained. “I was like, ‘These are the exact same symptoms, the exact same thing.’ But I think for the past year I kind of thought I’d have a girl. … But then when I found out it’s a boy — when the shock wore off — I couldn’t be happier because ultimately my biggest prayer was whatever would be the best for Gunner.” 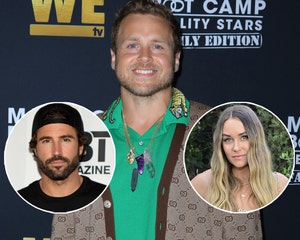 Back in June, the couple announced via the publication that they would be expecting baby no. 2.

“I felt like a person was missing in our family that I had this intense love for. And I kept praying about it,” gushed the “The Hills” star. “I’m like, if I’m not meant to have another kid — because I had accepted that at this point — I just wanted to not have that desire so strongly and I just wasn’t sure if it was going to happen or not. I just get so emotional about it.”

Pratt shared similar sentiments and revealed that he is most excited about becoming a dad of two.

“I love being a dad and I love all the different ages,” he continued. “So I’m excited to really appreciate how little a baby is. Because now, I look back at photos and now our son is huge and you can’t just hold him.”