A startup called Heliosphere Ltd. is hoping to make life easier for developers by simplifying troubleshooting during application development, after closing on a $5 million seed funding round.

Today’s round was co-led by Entrée Capital and Amiti VC, and saw participation from numerous angel investors too, such as Benny Schnaider, co-founder of Salto Labs and a former vice president at Oracle Inc., Snyk Inc. co-founder Guy Podjarny and Guy Fighel, a general manager at New Relic Inc.

Known simply as Helios, the company has built an application testing platform for distributed, cloud-native apps that are currently in development. Building such apps is a painstaking process and Helios aims to make testing them easier. As the company explains, modern applications are made up of hundreds of microservices and components and use various third-party application programming interfaces. Because of this distributed nature, a single initial request from an app can hit hundreds of different services as it branches out. That makes it difficult for developers to understand how their code interacts with the wider system.

DevOps teams typically use advanced monitoring platforms to troubleshoot apps running in production, but Helios says initial app development has been left behind.

Helios therefore focuses on this stage with a testing platform that gives developers a full understanding of how their code interacts with the distributed app as a whole. Through this, it becomes easier to build, troubleshoot and test various parts of their code.

Helios taps the power of OpenTelemetry to combine distributed tracing with other data sources, so developer teams can track how a request flows through a distributed application. That gives developers the context they need to resolve any issues that crop up as they modify parts of their apps, Helios said. Uniquely, its platform can automatically replay inputs at any point within the application flow. 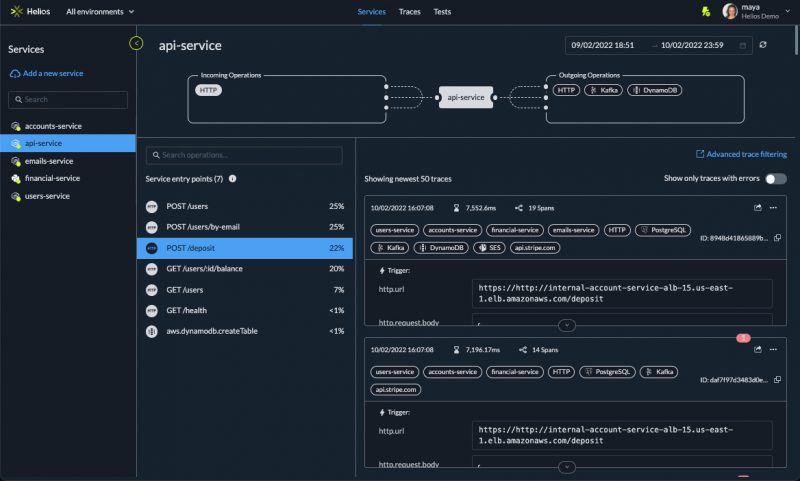 The result is that Helios increases developer velocity and productivity when it comes to building cloud-native applications, the company promised.

Helios co-founder and Chief Technology Officer Ran Nozik explained that the bigger an application grows, the more development slows down as it becomes more difficult to understand how a single change affects the whole system.

“A small change or bug in a microservice or API can ripple out through a distributed app,” Nozik said. “Perhaps 20 microservices later, that change causes an error, or data is silently lost. Devs spend more and more of their time troubleshooting and less on what they want to be doing — creating new features.”